The nurse called not long after I got up and said she’d be stopping by. This was yet another new one. That makes a good half dozen and none of them have been here twice. She was very nice and when I asked if hospice is supposed to cover my medications (I thought I’d been told they would) she said yes but only the ones that were connected with my admitting diagnosis. That means my cough medicine and pain med are covered. I told her that Cuz had had to pay for the cough medicine refill she’d picked up on Friday. She said to ask for a refund because they were supposed to charge it to hospice.

We were going over my list of medications, which is short by their standards. She asked about the B12 and I told her I have that and I literally have a lifetime supply. After some searching in the bottom drawer, she found it. When she gave me my shot, it was the best of either of the other two nurses or the home health nurse.

She was one of those easy to talk to people and I ended up wishing she could be my regular nurse but the one that was here last week will probably be it. She’s nice, too, but they all have been.

I’d called DD last night and Pixel was due in for surgery this morning. The nurse has sent three emails so far with pictures and DD has forwarded them on to her SO, merm and me. He came through his surgery well and should sleep tonight, for sure. This is one of the last pictures sent. 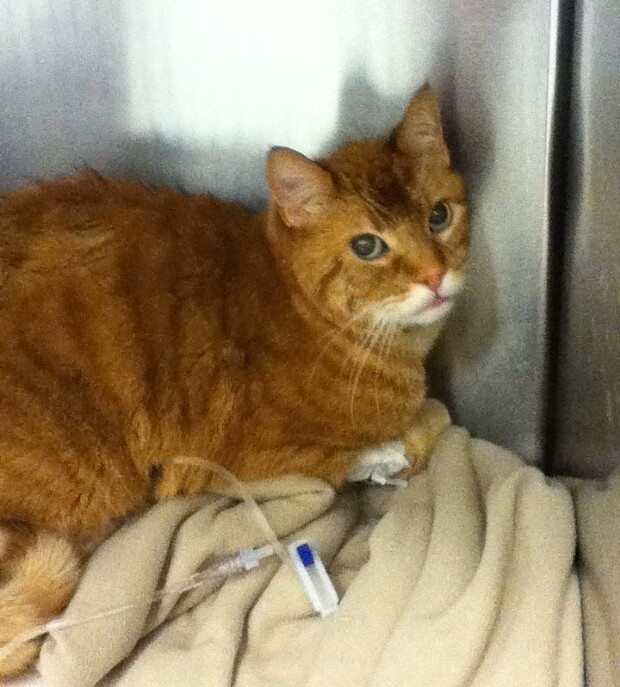 My grandcat is being well cared for. I know DD can take comfort from that.

The memories for today on Facebook had a link to a blog post from five years ago showing my grandgirls, DS2 and me the way we looked in 2002. If you want to see some cute (and one not so cute) pictures, click here.

I had another coughing episode this afternoon. When Cuz came in, I told her I’d had one and she said she could tell. I guess it’s obvious it’s worn me out.

I’ve eaten a bit more today. Breakfast was applesauce (my CIL had smoothed it out in the food processor), a scrambled egg and a cinnamon waffle. Supper was more applesauce and two pieces of my multi-grain bread, toasted. I may have overdone it with that second slice but it tasted so good!

This afternoon, I watched the last episode of season 5 of Call the Midwife. One of my favorite sisters had a massive stroke and died in her sleep. Before that, the doctor found out the Thalidomide he’d been prescribing for extreme morning sickness had been pulled off the market because of birth defects in some cases. There was lots more, of course, that made it jam packed.

When I asked, the nurse told me I could take my pain med at night. She said just to leave some time between taking it and my cough medicine. I get my cough medicine at 9 p.m. TT so I’ll wait a bit and take the pain med. I don’t want it to run out before I can get to sleep and you know how long that takes me.

I’ll see how the satellite likes this post. I’m just about tired of it going belly up every night. Makes bedtime later than I want.

One of Those “Bad Days”
Nourishment

4 Responses to So, So Sleepy