Last night was the was almost the complete opposite of the night before. Where I’d had a small mountain of tissue then, there wasn’t a single one this morning. And how nice it was to sleep uninterrupted! True, I had to get up now and then to heed Nature’s Call but that’s the case with any night. At least, that didn’t go on and on and on and on with hardly a break.

Today was the day for my shower. I was still working on drinking my water when my CIL came in asking if I were ready for my yogurt. Not yet. He had somewhere to go so he brought me his phone since that seemed to be the one home health people would call. He’d be out for a little while so he said to tell the aide how to get in.

When he got back, she’d called — on my phone!! — and would be here in about 20 minutes. He was going to bring me my yogurt then but I knew I wouldn’t have time to eat breakfast before she got here. If I ate the yogurt, I might not be hungry for the rest of my meal later. I decided to wait.

She got here and asked if I have a blood pressure machine. No, I don’t but Cuz does. My CIL had heard her and brought it in. She showed me her stethoscope. One of the tips had come off the end. That would smart to put it in her ear. She used the machine and my BP was 116/68.temp was 96.9 and pulse rate was 68.

I’d been playing and restarting one Freecell game so I asked her if she played. No, she plays Spider Solitaire. I’ve never played that so neither one of us had any advice to offer to the other. I mentioned Split Words and showed her the game. She was stumped by it. The category was European capitals. Even stopping to explain, I finished it easily before the time ran out. (Patting myself on the back.)

She told me about a word game she plays, 4 Pics One Word. We found it and I downloaded it. It will go along with easy words and then, BAM!!, there’s a hard one. Currently, I’m stumped but I solved the Freecell puzzle.

Since then, I’ve solved it. The answer is “bucket”.

The shower/head scrubbing done, she dried my hair while I was wrapped up in my terrycloth bathrobe. I went back to Mother’s chair and relaxed.

Cuz got home and her twin brother came in with her. We talked a little before I started having a coughing fit. He waited for me to stop but I didn’t. (Even my coughing is stubborn.)He finally gave up. Cuz changed my sheets and washed all my bedding except for Mother’s comforter. She washed my ratty robe, too. That’s what I live in. I have a pretty one but it’s too long.

I settled down to catch up on some of my cooking shows. Before I knew it, I got so sleepy, I had to stop. Dozing off, I have no idea how long I slept. The shower does me in but it feels so good!

When suppertime came, I wasn’t hungry because breakfast had been so late. When I DID get hungry, it was far too late to eat but I can’t afford to lose any more weight so I asked for Amy’s enchilada meal and I had two rolls. I’d seen these in the kitchen and thought my CIL had made them so I had him bring them in for a picture. 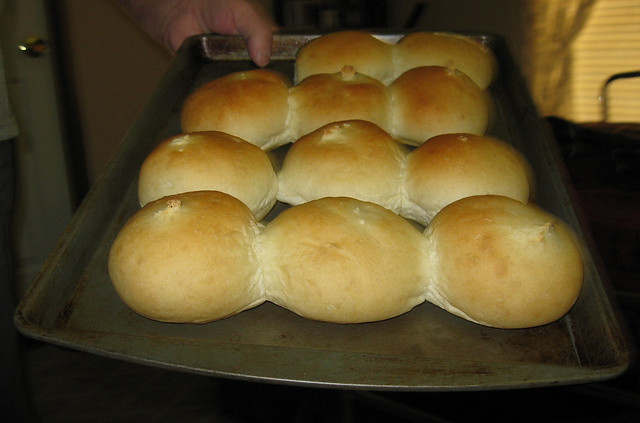 I found out later that they are the ones we’ve been having all along but they just rose longer. The joke was on me. Oh, well, they’re really good.

It’s really late and I need to get to bed so I’ll stop here. Cuz is going to go out on the mountain tomorrow and mow. The church is having a campout at the state park. I usually get a break from having to reformat the bulletin to merge the additional announcements but the secretary decided it was still needed so I did that. I’ll sign off with the promise that, Lord willin’ and the creek don’t rise, I’ll be back here Saturday night.

Under the Weather
Spendthrift

6 Responses to Getting a Late Start