I didn’t get out of bed until a little after noon TT. My niece may have already left to go to turn in her rental car. She said she wanted to give them plenty of time to get her to the airport. It took half an hour for someone to take another customer when she was picking the car up so I can see why. No need to get one’s nerves jangled. I’ve been checking on the progress of her flight.

Of course, the topic of conversation many places was the World Trade Center attack 15 years ago today. The most touching one I’ve ever read is the one by a member of the devotional site. There was no way to contact her directly to get permission to use it but I told her in my comment that I would take it down if she didn’t want it shared here.

Today is a day where just about everybody can recall where they were when the Twin Towers fell . I work in the NYC Subway System . MY normal day is spent mostly underground. In the tunnels below the earth on a subway train . For some reason that Day 15 years ago God had me assigned to a class above ground in Downtown Brooklyn. Like TOMMIE we saw the first Tower fall on the T.V. [when I got to the TV, the first was already down but I saw the second fall] but when the second Tower fell we knew it was no accident . When we were finally released what I saw was a scene out of the movies . Everyone was the same color best described as a pale blonde from head to toe ! People were Walking from Manhattan via the BROOKLYN BRIDGE . WALKING ZOMBIES ! Fear and shock ETCHED on their faces . I saw people with one shoe . No shoes ! Tattered clothes . Burnt possessions . THERE WAS AN EERIE SILENCE . I remember one man clutching a piece of paper that was burnt . I said to myself that person was very close to the disaster area . What these people had experienced began to sink into my soul and spirit . I felt so helpless . Praise God I was not harmed and no FAMILY member or Friends died in any of the incidents that Day. However one of the students with us abruptly left the class . He told us his Mother and Sister both worked in World Trade . Months later I saw him and asked ” How is your Mother and Sister .” Our eyes locked . He replied ” my Mother is OKAY. BUT they NEVER FOUND MY SISTER . ” My heart dropped ! I can’t remember what I said after that to console him . For Months , the Subway cars were SILENT ! No laughing , talking , singing and dancing by entertainers for money , no fighting and verbal exchanges by Angry passengers . Lord, even your babies and young children were quiet . It was as if they sensed the Evil that was released into the world that Day all over our Country . It was meant for evil but God you got the the Glory . People survived and are stronger. It has brought us closer to you . Relationships were mended and new ones were Praise God were formed . LOVE showed up where it had never been before . PEOPLE cried together , comforted , consoled and hugged one another. Color and race did not matter And it shouldn’t . There is only one race and it is the Human Race . Fifteen years later I still CRY and remember. My heart is heavy today . Some years I can watch the names being called . Today I cannot . So I have offered up Prayers for all who lost their lives that Day. Names are still being added . Last week names were added to the 9/11 MEMORIAL in Manhattan . People are still succumbing to health issues from recovery efforts and exposure . So today Prayers are lifted up to you Jesus for Their Families , Children who never knew their Parents, Uncles or Aunts , for Friends, Co-WORKERS , their church Family and Neighbors. We will Trust You Lord until the day we die!

There’s nothing I can say or add to that. It moved me to tears.

On a lighter note, Cuz and my CIL made more applesauce especially for me. The apples had mellowed to the point that it only needed half as much evaporated cane juice than the original batches. They had me sample before the jars were filled to make sure it was sweet enough. The end result was 12 quarts and three pints. I’d be able to bathe in applesauce if I wanted and Cuz would let me! Talk about being spoiled. I told my niece I want to die here. I’m ruined for anywhere else. 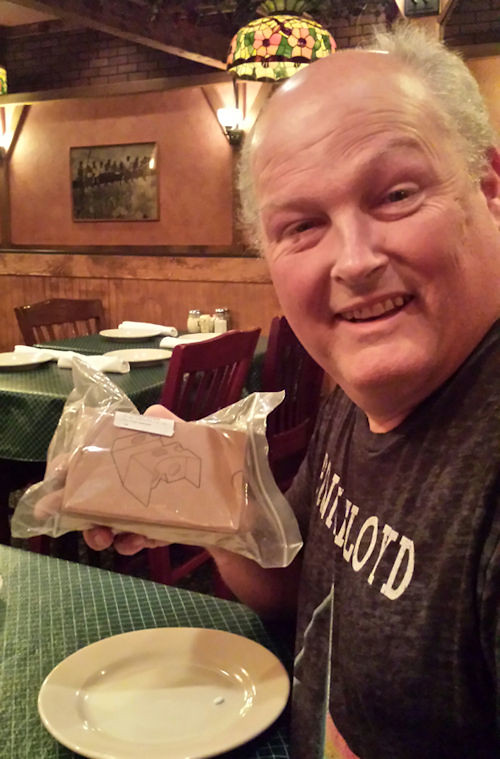 He asked if I know what Cardboard is. I told him no, that I’d been living under a rock. Funny thing is, when I talked to DD later today, she didn’t know. That surprised me. Her SO is into virtual reality.

So, now you know that DD and I had a conversation. I’d borrowed a phone from either Cuz or my CIL. I don’t know which one. They look alike. The phones, not the people. It died after we’d pretty much exhausted what we had to talk about. Before that, though, she told me she had tomatoes off her plants today. There’s been a lot of rain so some of them were split. She posted a picture on Facebook which I would normally share here but I’m trying to save my data so I won’t. They are pretty. You’ll just have to take my word for it.

Not long ago, I had an email from my niece that they had landed. I’m glad she made it safely and I know she’ll be happy to be home again and see her family.

Cuz fed me a large supper of veggies, sliced tomatoes and rolls. If I don’t gain weight, there’s something terribly wrong. I haven’t weighed since the last time. 🙂

Cuz came in for a good visit and asked if home health is coming tomorrow. I have no idea when home health will be coming. I hope it’s soon because wondering isn’t fun. We talked a little about sports (she’s a football fan but I have no idea what’s going on) and a host of other things. It was the first time she’d been able to sit down and really talk since I’ve been here. The woman is usually on a dead run doing something or I’ve had visitors.

Speaking of health, don’t you know the GOP will have a field day with Hillary’s having to leave the 9/11 event early? She was diagnosed with pneumonia on Friday but it must’ve been walking pneumonia since she continued on. Her schedule would kill a weaker person. The Donald must have something to hide since he won’t release his medical records — OR his tax returns. Too much hush hush to be legit.

It’s my routine refrain. “It’s getting late.” And it is. I’ll say goodnight here and sweet dreams.

And Another One Leaves
He’s 52?