Yesterday was the last full day that DD would be here. I’d gone out to the kitchen to drink my water and she fixed my breakfast. Coconut yogurt first. She learned that I like a little toast with my applesauce. I took what she gave me as the beginning and loaded it up from there. She fixed me some vegan egg to finish it up.

DS1 and I texted about the phone and how Hangouts Dialer wasn’t working. I finally had DD uninstall it and leave it off. It might not work with satellite, anyway. I think it’s going to come down to my having my own phone. He’s encouraged me to look into Republic Wireless but it isn’t advised for satellite.

I’m in a fog about the rest of the day. I remember dreading the time DD would leave.

I do remember correcting errors in less10m and 11m.

She fixed my breakfast — coconut milk yogurt with blackberry jam mixed in and toast with applesauce and cashew milk. Then I had my tea. I’m pretty much stuck on the same things.

That’s when we could settle down to some visiting. She promised me she’d be back later with her SO so I’m going to hold her to it.

When the time came for her to leave (about noon TT) she wanted pictures. Since I’m so beautiful, there’s no way I was going to deprive the world of seeing me in all my glory that eclipses my Dear Daughter (DD) and Cuz (she’s as close to me as a daughter). 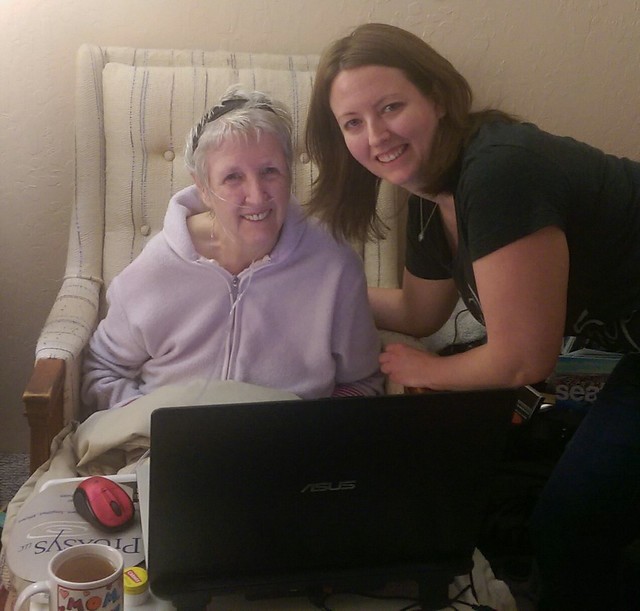 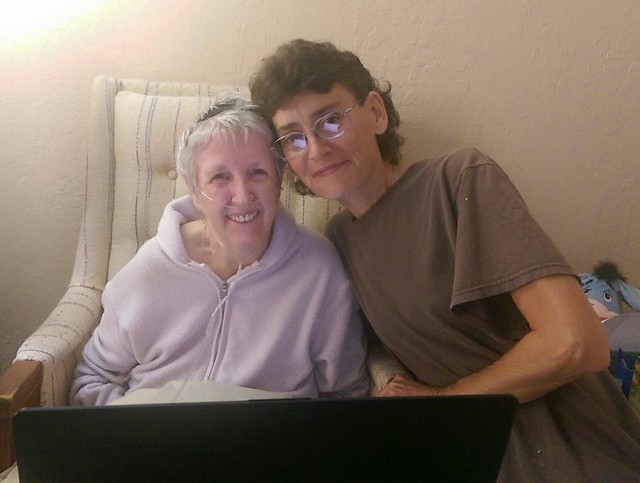 Much too soon, she walked out the door for the last time, got in the car and left. I tried not to let it get me down too much. When I go into the depths of despair, I pay for it with another nosedive and I don’t need that.

I hadn’t had my devotions yet so I did that. DD was surprised at how much time it takes but it can be very satisfying.

When I got up, the house was quiet so I got on the computer and checked my email. By that time, DD had arrived at the airport and was already at the gate. She’d gotten there a couple of hours early but, when one has that far to go, it’s in one’s interest to allow extra for unforeseen circumstances.

She kept me posted about what was going on and soon she was ready to board. I prayed that she would be comfortable flying. She does hate it so and I’m always aware of that. I pulled up tracking and failed to look at it again until she emailed they’d landed and were almost to the gate.

I know her SO was glad to see her. He’d really missed her while she was gone. I would have hated worse for her to go back if she didn’t have such a loving person to share her life with. And let us not forget Pixel.

Cuz was really tired and lay down for a nap. It kept getting later and later and my stomach was letting me know it. I ate some chocolate (courtesy of DD and merm) and looked in the fridge. I found some Cedar Lake Chops that DD had fixed yesterday and ate one of them.

When Cuz woke, she was concerned about me but I let her know I’d found something to take the edge off. She was surprised and wanted to know if I’d gotten it myself. Well, yes. I’m not totally helpless. Just mostly. She fixed me a big plate of food but my appetite wasn’t what it is when I’m really hungry so I only ate about half. No way to gain weight but I’m not starving, anyway.

I’m getting sleepy so I think I’ll call it a night and get some shut-eye. Cuz says she’ll be gone and back by the time I get up. We’ll see.

8 Responses to She’s Gone Away — Again