After a night of coughing, I woke to another hot day but I’ve been able to stay where it’s nice and cool. I feel for the people who have to go out in it and especially for the ones who work outside.

DD went to the mountain again to go through things. She got out her collection of Cabbage Patch Kids. 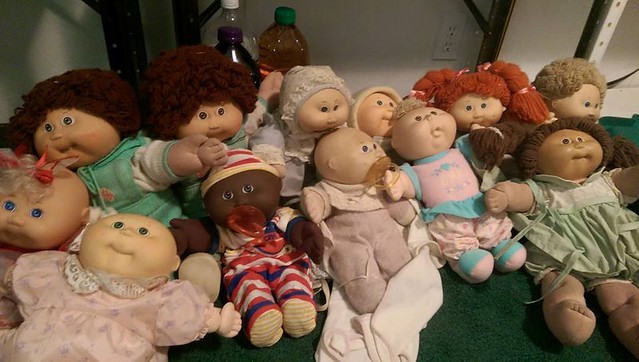 She told her SO she was picking out some to ship back and he said to send them all until she sent him the picture. He had no idea she had that many. Her first one is in the green dress on the extreme right. One of our friends gave it to her for Christmas one year and she fell in love. Coretta had to go everywhere we did and if she was left behind, we’d have to go back and get her.

After that, Christmas always brought another Kid to add to the family. One year, I had my eye on twins. That’s when I was making very little money at the hospital. I put them on layaway and paid them off over several months. She’s picked out Coretta and three of the preemies to send back to Washington. I don’t know what she plans for the rest of them. A mouse chewed the overalls on one. It’s a wonder there wasn’t more damage.

Not long after she got back, my sister-in-law and our friend arrived bearing gifts. Our friend had stopped at the university supermarket and bought all but two of their Ginseng UPs and two packages of my favorite breading meal. That was 14 bottles of the former. My SIL gave me a card with a stash o’ cash so, as Mother would have said, “She’s rich.” She gave DD a cute little mailbox stamp dispenser.

They sat down in my comfortable room and we had a good visit. I didn’t catch all of it because I don’t wear my hearing aids. It takes energy that I don’t have to use them so I don’t. No telling what I’m answering to sometimes but that’s the way it is.

Our friend did say that I look much better than I did last week. I’ve been getting lots of TLC and good food. I’m bound to look better. I weighed wearing only my lightweight sandals this morning and I’m up to 120 on the nose.

Rain was threatening when they left. It was a good way to remind our friend to take the umbrella she’d left here before.

DD showed me the things she’d brought from the house. There are several pictures plus she brought a lot of my DVDs. She told me to think of what I want her to bring tomorrow but it’s getting harder because I really don’t have a lot of room. I’ve asked for my newest hymnal and another songbook. She wanted to know if I’m going to play the keyboard. I had to let her know that I won’t right away. It will take more energy than I have now to do it.

Supper was some good ol’ pinto beans on toast and leftovers from yesterday. My platter was full again and I ate the whole thing. Then my CIL popped popcorn and I indulged in it. DD wants to experiment with my protein powders. I told her I’d try whatever she fixes but I do like stuff that tastes good. I like to EAT and my appetite is back in full force.

I was in bed earlier last night than I will be tonight. My roommate has had a rough couple of days so I don’t expect her to be here tomorrow.

Since it is so late, I’ll close this down and go to bed.

Night and Day
Still a Mom

One Response to More Blessings