My hair was driving me nutso. Recently, I’d ordered a clipper set from Amazon. I couldn’t go anywhere to Get Something Done so I’d do it myself or bust.

Cuz came yesterday and brought Black Tom back. He ended up spending most of the day hiding in the garage so my time wasn’t taken up with him. Cuz had put my purifier together and it was cleaning the air in my immediate living area. It might be a placebo effect but it seems I breathe better now. Whatever it is, I’ll take it.

She offered to change my bed but I decided it could go for another week. I’d done it last week and I hadn’t sweated, peed or pooped the bed so it was still reasonably fresh. Time was, I would’ve changed it, anyway, but that was then and this is now.

After she left, I grabbed one of the Shoppers and headed for the bathroom. I spread it out over the sink closest to the outlet and got the clippers. Picking out the largest guard, I put it on, took off my headband, stuck the cannula behind my ears and went to work.

Combing all my hair forward on top from the crown and down everywhere else, I picked up the clippers and made the first pass. It didn’t look a whole lot different. I did it again. It was cutting in front but I was lifting it up too quickly to make a difference any farther back. I started again and this time, I kept the clippers close to my head all the way back. I was committed.

Trying to overlap a bit, I kept cutting swaths of hair. The guard was supposed to leave it an inch long but my not being able to see what I was doing made it less than that some places. My mother would have said it had gap-osis though she used that to describe a blouse that was too tight across her “upper division”.

By and by, I’d done all the damage I could. I had a nice pile of hair on the Shopper. 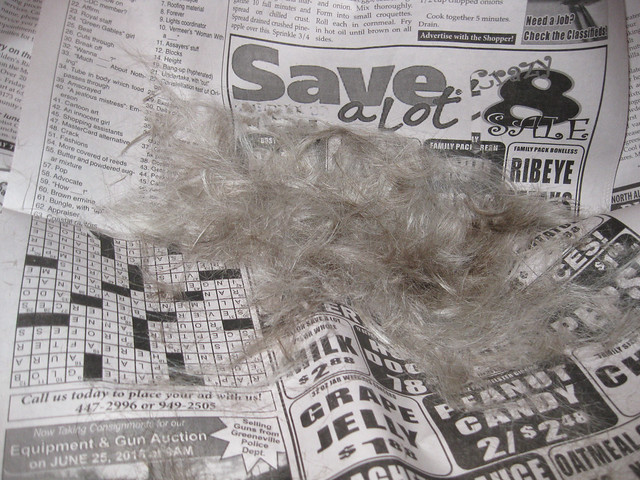 I rinsed out the tub but I decided all the little bits and pieces of hair clinging to my body would be better removed in the shower. Washing my hair took seconds. When I got out, it took about a minute to blow it dry. It felt so much better. The hair at the back is still ‘way too long and it needs trimming over my ears but the comfort level has vastly improved.

When I was still gainfully employed, one of my co-workers asked what the difference is between a good haircut and a bad haircut. I didn’t know so she told me. Two weeks. We’ll see how mine looks on July 1. If her claim is borne out, I’ll take a picture then. As for now, it’s still too new.

Talk about tired! I was after that. I’d posted the picture above on Facebook and my roommate was the only person to comment. I told her, “It wasn’t as easy as I’d hoped it would be. It taxed me bigly.”

Going out to feed the Catz in the afternoon, I called and meowed and, finally, here came Black Tom. He gingerly jumped on the compost bucket and from there, the railing. I was petting him and inspecting his surgery site at the same time. It doesn’t look a lot different except the area had been shaved. One of his aunts came up and nuzzled him but another batted at him and hissed.

Cuz had asked me to print off the email for my tissue order but it isn’t time yet. Today, I got a message that it’s been shipped but it still shows a delivery date of the 24th. She was concerned about my supply and rightly so. After a coughing episode last night, I had to get a roll of Kleenex out of the bathroom cabinet. Then the box next to my chair ran out today. I’ve been using tissue my sister-in-law gave me when she visited me at church months ago. There’s one box left in the master bath and then that’s it until the other gets here.

When I went to bed last night, I had the purifier fan set on 10. I found that it makes breathing more difficult if I do that since it’s so dusty in here. It blows it around. Putting on Auto shows what the level of bad air is. It had gotten down to nothing but was at 4 when I switched it during the early morning hours.

This morning, I took a chance and tuned into a live stream for one of the services online. One of my favorites, LeClare Litchfield, was the speaker. He conducted a nice baby dedication and, after some contemporary music (I’m not a fan), he spoke on healing. It wasn’t in the usual sense of the word. He included the tragedies in Orlando — both the shooting at Pulse and the alligator attack. Then he brought it closer to home when a plane had crashed just one week before as it was attempting a landing at the local airport. He paused before the end of his talk to let members of the congregation share. I was glad I’d tuned in. I was also glad I could pause it and take care of my own needs when it became necessary. I couldn’t do that at church.

On up in the afternoon, I tried to doze off a couple of times. Nothing doing. I fed Catz and petted everyone up and down the line. Black Tom followed me and insisted on getting his share and more of the petting. Besides that, I watched several of Chonda Pierce’s videos on youtube. She has really been through it and is still able to joke about it and make others laugh.

I’ve about exhausted the supply of tissue from my SIL. Guess it’s time to break out the last box. I get so tired of spitting and blowing my nose. There went the last piece so here I go!