First thing this morning, the phone rang. It was to confirm my appointment for the BRAVO. The lady took my history and a list of my meds and we hung up. I was tempted to go back to bed because the house was still on the cool side. I didn’t, though, and here I am, still at it.

I’d been doing some research (surprise!!) about the study and one of the sites said the patient shouldn’t use a computer while the receiver is recording the results from the capsule. I called back and talked to a nurse who told me it’s okay to use it off and on. Also, she said sometimes there is interference if the patient uses the computer on the lap. I assured her I don’t do that. To me, that’s awkward.

When I looked outside, here’s what I saw. 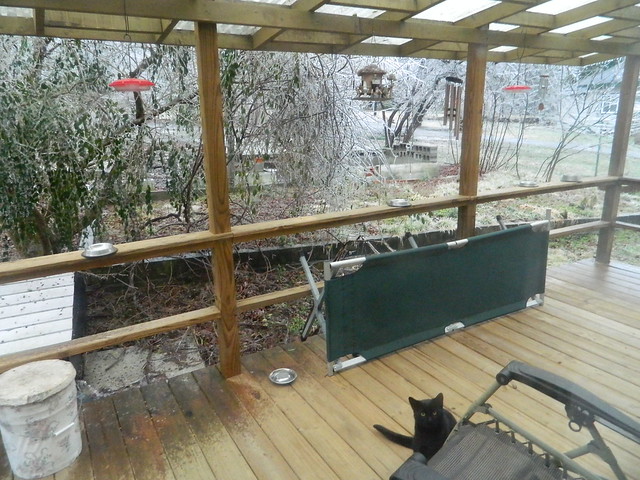 The sun never broke through the clouds today but, in case you can’t tell, everything is ice covered. And, of course, the Black Shadow is ever present.

When I came in from putting food out for the Catz, the black one came to the door and reached a paw out like he wanted to come in. I didn’t take the hint. Toms like to mark territory and I don’t need that. Even one that’s neutered will pee on things. The current arrangement is fine.

DD called as promised and we were on the phone just over an hour. I coughed a lot but that isn’t unusual. I wish it were.

DS1 had emailed me that he was trying out Thunderbird and wondered if he’d like it. I told him I do. I have folders set up and filters for the messages so I rarely get anything in my personal inbox that doesn’t belong. Spam seldom makes it to Thunderbird because gmail does a good job of catching it.

I was eating supper when DS1 called for a conversation. He was trying out calling with WiFi and I was the guinea pig to see if it was decent. It was. He said I broke up once or twice but I think that was on his end.

Cuz called tonight to see how it is here. I looked out just a minute ago and it’s still raining. When I turned the light on, it surprised the gray cat so it’s still around. That’s the first time in days I’ve seen it. I wish I could determine what gender it is. I’d like to be able to call it “he” or “she” rather than “it”.

Time marches on. I was cold last night so I’m going to take a nice warm bath before I go to bed tonight. I don’t mind a cool room to sleep in but I do like a warm bed.

A Barroom Brawl
Life Is What Happens…