While I may not have bitten off more than I can chew, it’s still a large mouthful to say I’m watching ALL of the debates. Seems like there’s one every few nights and tonight is no exception.

But let’s pick up where I left off. Yesterday morning, I was up early (for me) and stripped my bed. I put the sheets and pillowcase in the washer and set it on delay wash. I was going to be out and about.

Cuz had texted me that she would be coming by. I told her I had to go for my barium swallow/motility eval plus I planned to do some shopping at Walmart before I came home. She’d be here after I got everything done so it was a date.

I’d been called on Friday and told what to do/not do in preparation for my test. I agreed to pay the co-pay up front but when I was registered, I wasn’t asked for it and I didn’t remember it.

There wasn’t a very long wait and I was allowed to keep my clothes on except for my bra which has an underwire. The tech had me put a gown on over my sweatshirt to keep from getting the “milkshake” on it.

There was a little difference in the procedure. I had to take some “crystals” with water to expand my stomach (like it needs any help). Then I drank the “milkshake” and was turned and tilted in all different directions. After I’d been viewed from every angle, I had to swallow a tablet so its downward spiral could be tracked. Then I was helped down and given a wet washcloth to clean the residue off my face.

Putting my undergear back on, I was escorted to the lobby and was on my way.

At Walmart, I saw a couple of friends — both employees and both Facebook friends. One of them saw me waiting in line and had me go to the next register over where she checked me out. It’s nice to have connections.

I’d been home long enough to unload and put away before Cuz got here. I was getting ready to juice some oranges for breakfast when she came in bearing a 30 lub bag of food for the Catz.

She said she had planned to ask how I was until she heard me coughing. It was several minutes before I could talk to her. And I wonder why I’m tired.

We visited for a little while and then she decided she would make the bed. The sheets had washed while I was gone and I’d put them in the dryer when I got home. They were ready to go so she did that while I fixed my juice. Then she grabbed the vacuum and went over the living room carpet. The table DD had given me for my birthday was still in the box so she got that out and put it together. Next, she carried out the trash and gathered up the boxes that had collected during her absence.

She had some business to do online so she went back to her house to take care of that and I had breakfast. When she came back over, I was feeling a little queasy. I think it was because of the barium but I could be wrong. I thought I was, once, but I was mistaken.

After she left, again, I kind of collapsed. It was nice I didn’t have to make up the bed. I might have had to sleep in it with no sheets.

Last night, I got in touch with the pianist’s sister. I was wondering if she would be at church today. The sister said the pianist was still emotional over the death of her FIL so I figured I’d better suck it up and get a good night’s sleep so I could preside at the organ.

Taking a cue from last week, I wore my heavy winter coat and sat with it wrapped around my legs except for when I was playing. I found the hood was good for warming my hands. The sermon was a DVD by a fellow I’d never heard of and he had somewhat of an accent that was hard to understand 100% of the time.

I came on home rather than stay for the fellowship meal. I hadn’t taken anything and I don’t like to stay if I’m empty-handed.

When I pulled into the driveway, I saw the one little daffodil still in bloom eight days after I’d taken its picture. The sun was so bright that day, it washed it out but this is proof that spring is just around the corner. 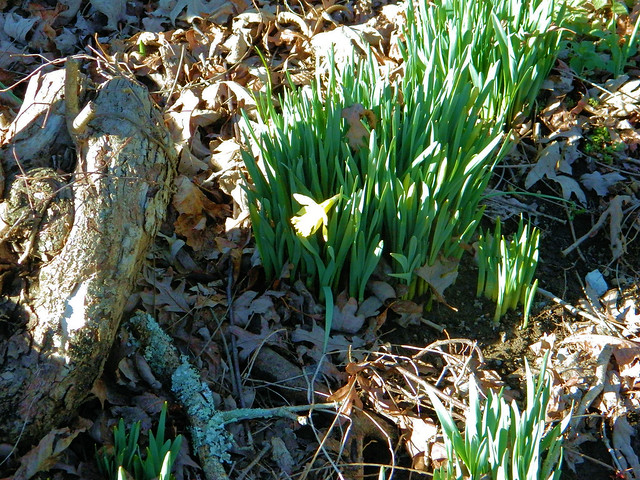 This evening, the Catz were anxious to have their evening meal. They’ve been cared for and if they aren’t snug and warm in the garage, it’s their fault.

It’s just a few minutes until the GOP debate begins. This election cycle is like no other. I could do with a little less excitement.