When I get something I really like, I hang onto it. I’ve been carrying the same purse since September 2009. I remember when I got it because it was perfect for my ASUS eee PC. When I got a different netbook, I gave the original one to DS1 but I still have the purse and it goes everywhere with me. If need be, I can throw it in the washer, damp dry it, stuff it with plastic bags to complete the drying and it’s (almost) good as new. It does have one frayed place but that just gives it character.

Probably before that, I bought a couple of pairs of Avon sandals. They aren’t beautiful but I wear them, anyway. I have one pair that stretched out so much, I can wear them with heavy socks in the winter. That is, I could until… 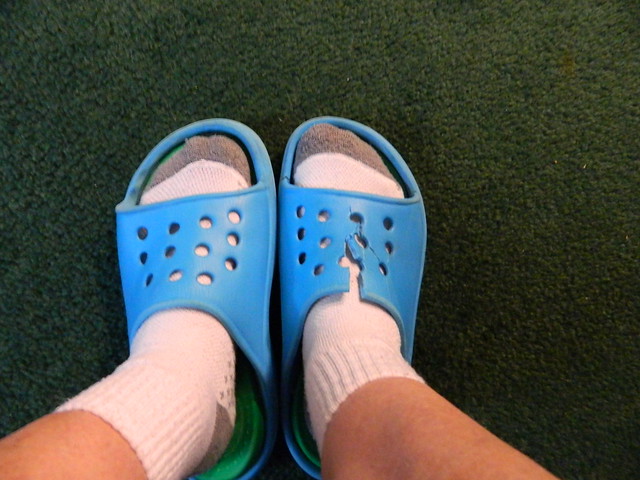 Today, I went to Walmart to get the (very) few things I needed. One of the associates led me to the fabric/craft section where the glues of different types live. I got some that’s supposed to mend plastic in 30 minutes. I put down a paper towel with the sandal on top of that and went to work. I pieced it back together as best I could and held it in place with a couple of strips of tape. Not wanting to hurry it, I let it be for several hours.

Taking the tape off, I put on a pair of heavier socks (I wear very thin socks with the other not-so-stretched-out sandals) and put on both. I sat down to take the following picture and it was already obvious my efforts were in vain. And, by the way, my legs aren’t that big. It’s the angle of the camera. Really. 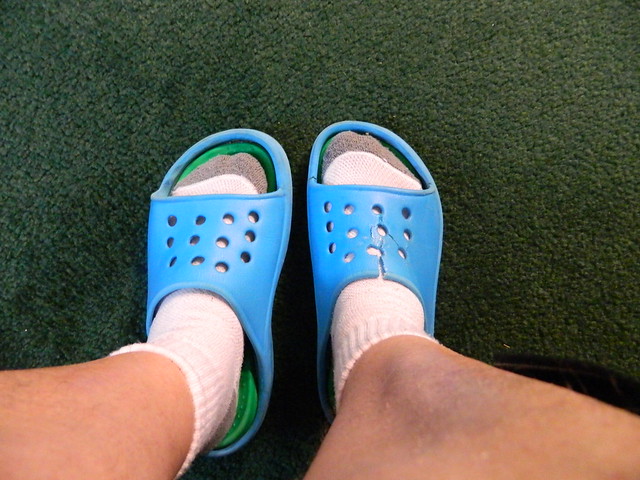 After I took that picture, I did what I should’ve done to begin with. I fell back on the tried and true. Duct tape. 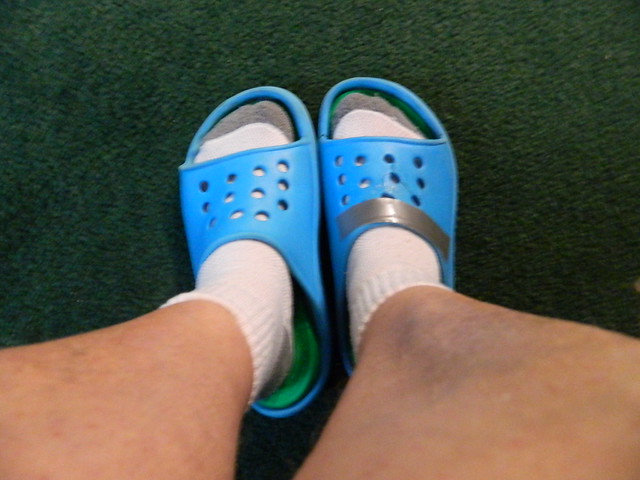 I doubt you’ll see me wearing these in public but, around the house, they’re perfect. Before it’s over, there may be more duct tape holding them together. I know they’ve prevented stubbed toes many times and, while they aren’t a thing of beauty, they ARE a joy forever.

The Catz have been fed. I don’t think they like the Meow Mix much. They didn’t seem enthused by the 9 Lives, either. So far, Kit & Kaboodle has gone over the best. Since I don’t buy it but just dole it out, I feed them with whatever I’m brought.

When I was getting ready to go to town, I’d sat down on the foot stool close to what used to be my bedroom door. There was a cold draft coming through. I got a towel and put it over the gap and I do believe it’s warmer in here. Of course, it could be because the temperature outside is 28 instead of 12.

6 Responses to I Don’t Give Up Easy