The phone rang when I was still in bed. It quit and I settled back down. Then it rang again. I picked it up and groggily said hello. It was DS1 wishing me a Merry Christmas. I don’t know how it came about but I told him I wasn’t up yet. I squinted at the clock. It showed 11. UGH! It was still so dark out, it looked like it should be right at dawn.

They’d sent me an Amazon gift card the day before. He told me I could get the table I had on my wish list so I could tie my shoes. No, it’s something to set the cat food on so I don’t have to bend over. Anyway, it’s enough to get that and more.

After we hung up, I crawled out of bed and got ready to face what was the rest of the day.

Thursday, I’d had a sample packet of Aloha Protein mixed with cashew milk. The flavor wasn’t bad but it didn’t mix completely and it was very thick. Yesterday, I had the vanilla and it was awful. I learned from my mixing mistake of the day before and gradually mixed the milk in. That helped get it blended up but there were still lumps. However, it tasted like nothing I’ve ever had before. I’d tried to call the company to cancel any future shipments but I guess everyone was given Christmas Eve off.

DD called from merm’s where the two couples had gotten together for the traditional Christmas pizza. She asked me if I were going to have anything special and I said yes and told her what it was. She approved. Here it is: 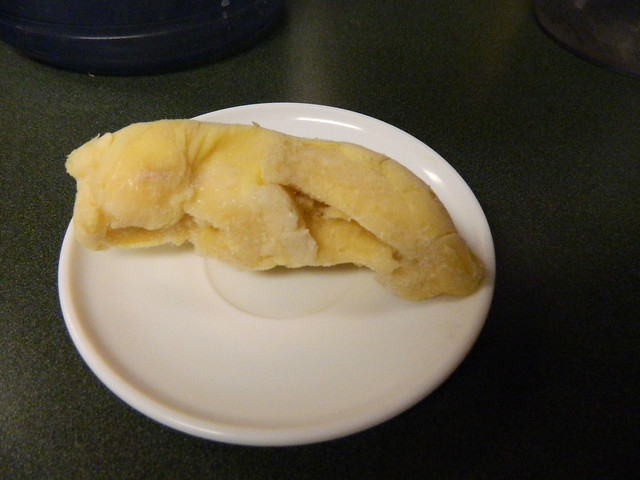 It isn’t something I have every day but it is so yummy!

She told me my Christmas gift hadn’t been sent yet. That was a relief. If it was in the mailbox, it was surely wet.

I told her I was going to have “pizza”, too, but mine was going to be on flat bread. I’d put mozzarella shreds mixed with Italian herbs and basil on the flat bread and top it with sliced tomatoes, then baked. However, I hadn’t counted on the flat bread being molded. It was in the fridge. I figured it would be okay but it wasn’t. I ended up having the heel of plain old sourdough bread with the toppings. It was good but not quite what I had anticipated.

A bit later, Cuz came by with my Christmas present. It’s a heated blanket (why are they no longer called “electric blankets”?). She said I’d never want to get out of bed. Well, I told her, not so. The directions with the bed said not to use a heated (electric) blanket with it. She didn’t know that. She’d put one on her construction partner’s brother’s hospital bed. I told her I’ll use it when I’m computing if the weather ever gets cold enough. For now, it’s still in the nice zippered package. I invited her to sit down but she said the others were waiting in the van. She left a bag of food for the Catz and was on her way.

Another gift certificate came from DS2 and his. I’m sure my DIL was the one to send it but it will spend just as well, anyway.

I did the usual Friday chores. I toyed with the idea of not changing the bed but figured The Day was just an excuse so I did it, anyway.

It wasn’t the Christmas I used to have with family and friends but times change and I have to, too, whether I want to or not.

This morning, I left for church at 9:45 and got there at 9 o’clock. They fell back and I didn’t. There were quite a few others there, too — more than usual at that hour.

The Sabbath School teacher was feeling under the weather so our lesson study was a DVD on Jeremiah. The superintendent came up and asked me to play the meditation music so it would signal the audio-video guy to stop the DVD so I did.

Christmas music abounded today. We had it for both song services and I played it except for the meditation music. I remembered to play “Away in a Manger” for the kids to go around and take up the Lamb’s Offering. It goes for “church projects” now. Guess that’s anything. Originally, it went to the school but then it closed. For a time, it was earmarked for a new church (which is badly needed).

The speaker was the male half of my roadtrip friends. In the middle of his sermon, his wife started giggling. I thought, “He didn’t say anything funny!” Then I heard his phone ringing. He took it out of his pocket and looked at it. He said the name of the caller who is also a pastor. He answered the call and after the usual back and forth, he said, “I’m preaching.” I don’t know what the caller said but he repeated, “I’m preaching a sermon right now.” Meanwhile, his wife was laughing until she was almost crying. He finally convinced the caller that he was in the pulpit currently preaching the message to our congregation. “Do you want to talk to my wife?” I guess the caller said no.

After the service, I went out and told my friend to tell the caller he owes us one. He’s never been to our church that I know of and now he needs to come share. It turned out the phone is supposed to be off during church but it wasn’t. He said that, in all the years he forgot to turn it off, this was the first time someone has called him. To give the caller his due, he was in Eastern time and the speaker was preaching in Central so he no doubt thought church was over. It was a pretty funny happening, though, and will give them a good story to tell.

There was a Christmas potluck but I intended to come on home and eat leftovers. That was delayed by a long conversation with a friend who is having some health issues. We ended up standing on the porch of the church and talked for most of an hour.

When I did get away, I came on up the mountain and stopped at the mailbox. It had a couple of Christmas cards and a package from my sister. Since she is still braced and splinted, our other sister had wrapped and labeled the package. It is my annual women’s devotional. There’s only one devotional that was submitted by my sister. I thought our other sister had one in 2016, too, but I was mistaken.

Tonight, something caught my eye outside the dining room window. It was fireworks! I went to the kitchen and saw some beautiful ones through the trees. I’ve heard them before but always looked up and down the street for them. Now I know where to look. It was a nice display with a lot of the big “showery” ones. There was a lull so I went to the bathroom but didn’t get back in time for a large volley of them. New Year’s is coming up and then the 4th of July. There might be other celebrations thrown in there, too. I’ll just have to keep my eyes and ears open.