For a wonder, I woke at a reasonable hour this morning, got up and took my meds and stayed up. I did all of my “bending over” duties which pushed my breakfast kind of late but that’s how it is when I avoid coughing episodes.

Clouds were still in the sky until up in the day. The sun finally came out and it was so nice to look up at a blue sky with puffy white clouds while I was taking my bath. The odor of the possum is all but gone. I could barely detect a whiff of the aroma in the air. Mercifully, it wasn’t enough to keep me out of the bathroom.

After I finished my bath, there was a knock on the front door. It was my CIL with a bag of green peppers Cuz had promised. There were seven—five of them were sound. Two had spots on them that could be cut out.

Later, as I was putting rice on to cook, the phone rang. It was DD. There wasn’t a whole lot for either one of us to tell the other. They were cleaning the apartment and getting it ready so they could turn in the keys. It’s official. They’ve moved. We talked just over 15 minutes. I think it’s the shortest conversation we’ve had for a long time.

I was in the kitchen getting the peppers ready to blanch when Cuz came in. She was interested in how I was fixing them. When she left, I finished up and made some cashew sauce to mix with the rice, chopped imperfect peppers and some mushrooms.

The timer for the rice had gone off so I mixed about a cup and a half of the sauce and all of a jar of mushrooms with it. I stuffed the peppers and put nine in a Corning Ware baking pan and set it in the freezer. Tomorrow, I’ll put them in sandwich bags and then a freezer bag. 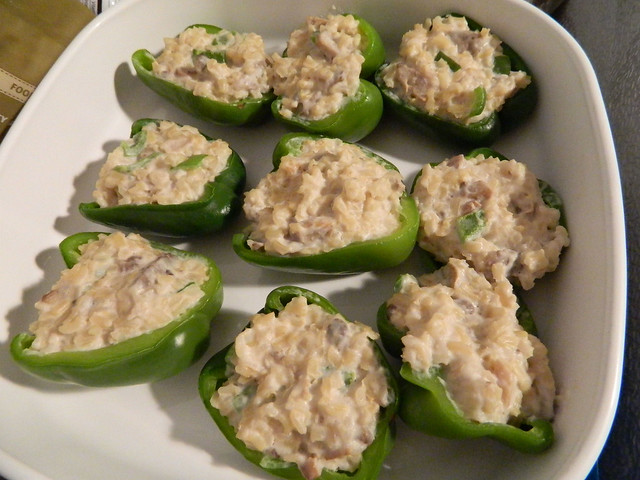 My salad was followed by a stuffed pepper and some of the leftover filling. What I ate today was an education. This winter, I’ll wrap the pepper before I heat it so it won’t dry out.

This morning, I stirred up a batch of biscuits and had one plus the little knobby one (made from the scraps) with Bisto Onion Gravy

(from the UK). I had another biscuit at supper but didn’t include the Bisto. That’s tasty stuff. I get in trouble watching British videos. That’s where I learned about Bisto. I have the vegetable, too, that I haven’t tried and plan to get the Favourite, as well.

Cuz came over about “dark-thirty” and we sat and had a good visit. She’s working on a project that is down the mountain, through the valley and up another mountain. Her twin brother helped out today, too. It’s a family affair.

I haven’t had my third NAC yet so I’d better do that. Of course, the doc says it hasn’t been proven to do any good but it doesn’t hurt, either.

It’s 54 degrees outside. I have my ratty housecoat on over my clothes. I’ve been sleeping under Mother’s comforter and will do the same tonight.

Break Time
No Credit Due