I’m not sure about me.

I started using Flonase yesterday and am wondering if that’s what has me feeling not up to par and a bit shaky. The gastro advised me to get it to see if it would help stop my coughing. He’s of the opinion that it’s aggravated by post-nasal drip.

Yesterday was the usual Friday with all the Friday chores. I’ll have to remember to flip the mattress next week. That will make two months since it was done last.

The bulletin file had been sent on Thursday but it was littered with TBAs. The head elder sent the info and I got it inserted and sent out.

I’d been busy and failed to feed the Catz and Kittenz until after sundown. When I got the food out, Loudmouth was at the door and broadcasting to the neighborhood that food was on its way. Of course, here came Neighbor Cat. This picture isn’t very clear because I took it through the storm door. If you look closely, the black kitten is in the middle. Neighbor Cat knows it isn’t supposed to be there. S/he would have run if I’d opened the door. I have an idea it might be a he and the father of the Kittenz. The tipoff is the long hair that the gray kitten sports. 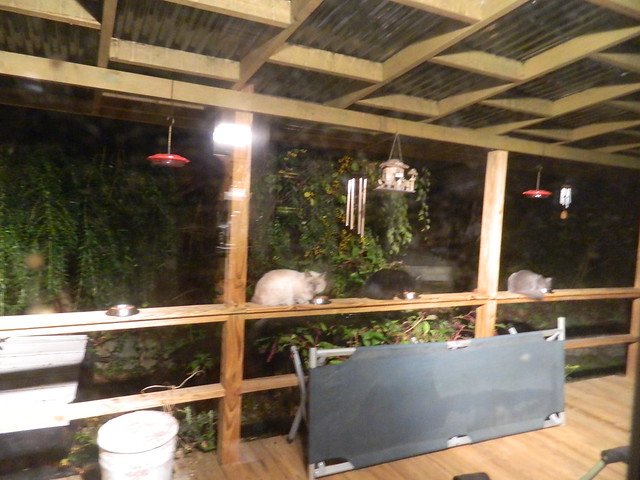 Sleep came easily last night. I’ve been doubling my normal dose of melatonin and I think it’s doing much better than it has before. It would be nice if I didn’t have a teeny weeny bladder.

After my dose of Flonase this morning, I started feeling washed out. If I hadn’t been expected to play the organ, I would have stayed at home.

I’d taken another look at the bottom of the shoes I’d bought at Goodwill and the size is 6W. If I’d seen that at the store, I probably wouldn’t have brought them home. As it is, it’s turned out to be a blessing. I tried them with inserts and thin black dressy socks and it was no go. I got out a pair of heavy socks I wear with my running shoes and they’re near ’bout perfect. They’re comfortable that way and my feet are warm. Can’t beat that with a stick. I didn’t do it today, but I can put the thin socks over the thick ones and no one will be the wiser.

Sometimes it takes three of us to do the bulletin. The bulletin secretary created it, I got the rest of the info and completed what I could and one of the elders took my PDF and printed it.

It would have been nice to stretch out on one of the pews but I made myself sit upright. I’m getting better with adjusting my hearing aids so I can hear. I didn’t miss a whole lot today.

The Cavalry was the speaker and he did a good job. His message was “R U Ready?” (guess he took a page out of texting there) and his train of thought was easy to follow. He actually wound it up and we were out by noon. No one had a chance to get hungry—at least I didn’t.

A lady stopped me and told me how much she appreciates my playing. I told her I pray before I play every time, and I do. I pray that it will be a blessing and not a distraction. I try to do my best but I mess up royally at least once every week and several little times.

It was a long way from 1 o’clock but I figured I’d go to the funeral home and sign the book, anyway. When I got there, the deceased’s name was nowhere on the board. One WAS there, though, that was a surprise. It was another former co-worker and one of my Facebook friends. Her visitation was to start in five hours. A little long to wait. Her funeral is Monday.

I thought I’d made sure that was the right funeral home. I drove to the other end of town and the board at that funeral home was blank.

When I got home, I checked the obituary and found that the funeral was yesterday. I could have sworn it said today. I was a day late for that one and ‘way too early for the other.

Briefly, I considered going back down the mountain to pay my respects this evening but I had to admit to myself that I just wasn’t up to it. Playing the organ had taken what little energy I had.

After I ate, I tried my best to watch Leopard Vision. I got more than halfway through it but it’s in a format that seems geared to younger people. I had to keep stopping it and backing up to read what was on the screen. The fellow (I don’t know if he’s the Forerunner or not) is easy to understand. I still have 20 minutes to go but I won’t tackle it tonight.

I was surprised to see my CIL’s vehicle when I got home. He didn’t come over here but I assume he fed the Catz. I’d put out food for them this morning so I’m sure they’re okay. If they get hungry, they can catch a mouse.