The day had been sunny. My room was hot and stuffy, already. The Faithful Tech on the night shift had brought in a fan that I kept going. I remembered extensions and called Maintenance. Surely something could be done about the venetian blind, at least. It didn’t completely cover the window and the sun streaming in made the room even hotter. I’d wanted to go to the tropics but there was no palm tree to be seen.

When the two men came in, the supervisor proceeded to open the vents in the room. Ah! So that was it! It was still set up for isolation even though it wasn’t necessary. It made all the difference in the world. The fan was turned off and I could finally put a sheet over my nightgown-draped body.

That night was filled with more wakefulness. Lack of sleep and lack of food was making me a bit loony. When I’d close my eyes, I could feel someone touching me but no one was there. It was a strange sensation, to say the least.

My plea for food hadn’t gone unheard. One of my good friends offered to bring me something but it was supposed to be snowing so I told her to wait. I’d have to eat hospital food for another two days but there was hope on the horizon. I still had bananas and I made good use of them. During the whole stay, I drank three cups of Dandy Blend. I might be hungry but I could still keep body and soul together.

Wednesday night (I think), the snow started coming down. With the blind forever about eight inches above the windowsill, I had a ringside seat. I watched the snow off and on for hours. It was mesmerizing.

I’d been taking cough medicine regularly. It came in what looked like little margarine tubs. One night, I had requested it (I found that if I headed the coughing off at the pass, I didn’t have to go through beginning to cough again and then subsiding.) (Some of the nurses brought it to me every four hours. Others waited until I asked.)

That night, it was taking forever to get my dose and I started coughing in earnest again. By and by, the nurse came in apologizing because the delivery system had changed and she had been looking for the original ones. Here’s what the new ones looked like and I could administer it myself: 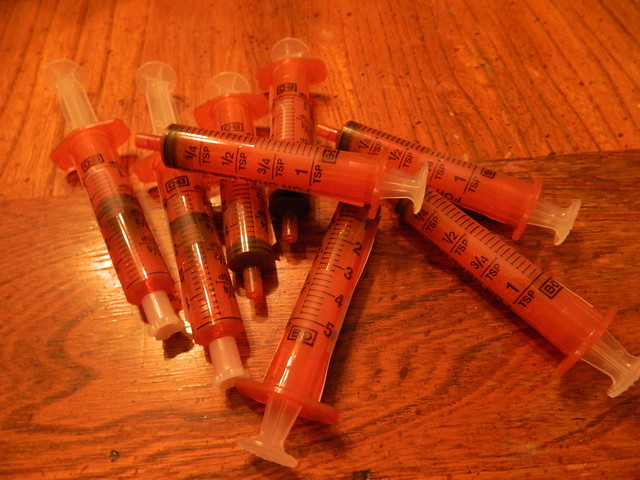 I asked for the little syringes for “Show and Tell” and was given them one at a time. Otherwise, they went in the trash.

The snow continued on and it became a winter wonderland outside. Inside, I was warm if not well-fed and I could sleep or not (mostly not). That I was alert at all was a miracle.

2 Responses to Coming to an Understanding, Part 6