I couldn’t get to to sleep last night no matter what. When I did doze off, I dreamed about the fire at the bakery. I woke and had a horrendous leg cramp that didn’t go away until I got up and drank a couple tablespoons of pickle juice. That woke me thoroughly and, at half past 2, I decided it was time to do something about the situation. Digging out one of my two remaining pain pills, I took it with half a glass of water. That did it. I went to sleep and slept until after 7 o’clock.

With an almost 100% guarantee of winter weather coming, I had promised to get my sisters notebook to her today. My county is one of the white ones and, as you can see by the color key, it’s a warning—not a watch or an advisory. That pretty much means it’s gonna happen. 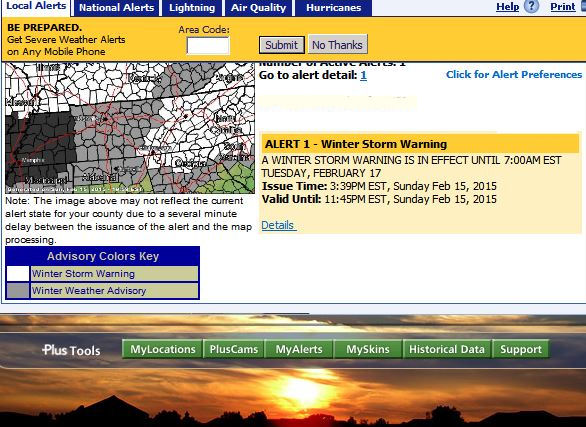 The temperature was 9 degrees when I got out of bed. Before I left, it had “climbed” to 13. I wore my permanent coat but I have no idea where my gloves are.

As I always do, I called my sister right before I walked out the door. I found out why she can get here so much more quickly than I get there. I go back roads and she goes Interstate.

I arrived at the house and we set up the notebook. I instructed her on several programs but she is still in the habit of closing things. If that’s what she wants to do, it’s fine with me. I’m so used to multitasking that it isn’t unusual for me to have eight or ten programs open at once and I currently have 19 tabs open in Chrome. One triumph was Thunderbird. When I showed her how to use it, she said she liked it!

Her daughter and grandchildren left us to our own devices so they could go shopping. We broke after a couple of hours and went to the university supermarket. She treated me to a sandwich, chips and a GinsengUP. I drank a couple of sips, put it in the car and went back to shop.

They were out of my favorite coconut yogurt. I was heartbroken. They’d had a sale on it and it had been cleaned out. I paid for my purchases with part of my gift certificate DS1 and family gave me for Christmas.

We passed the bakery twice and it didn’t look much different. My sister spotted some smoke marks but I didn’t see them. Since then, I saw a post on the bakery Facebook page that the owner had been attacked by two intruders and had suffered some cuts and bruises. He said he’s okay and recovering.

Back at the house, the family was home and my sister tried to give me all sorts of things including money. I did end up taking a jar of granola. There was a bit more instruction and I left.

Walmart was pretty busy and my favorite produce person said it had been wild with people stocking up before the bad weather. She hugged me hello and goodbye. I got my purchases and came home.

The Catz were in residence when I left but not when I came in. Yesterday, I fed two of them four cans of the Fancy Feast I’d bought for Twinkle. The cans and all but one of the lids were gone off the deck this evening. I bought a big bag of cat food so I can feed them when they come begging. They’ve been losing weight and felines can end up with all sorts of ailments if they are starved. I want ’em healthy enough to keep the mice away.

I’m sleepy. Wonder why? It could be because I didn’t get my eight hours in last night. I won’t stay up to see when the winter weather hits. Anyone who’s interested can be my proxy.

I Won! I Won!
Promises, Promises

2 Responses to Another Road Trip