The temperature was in the mid-40s a little after midnight but started dropping. It hasn’t gotten above freezing and it’s back down to 23 now. When I got up, here’s what greeted me. 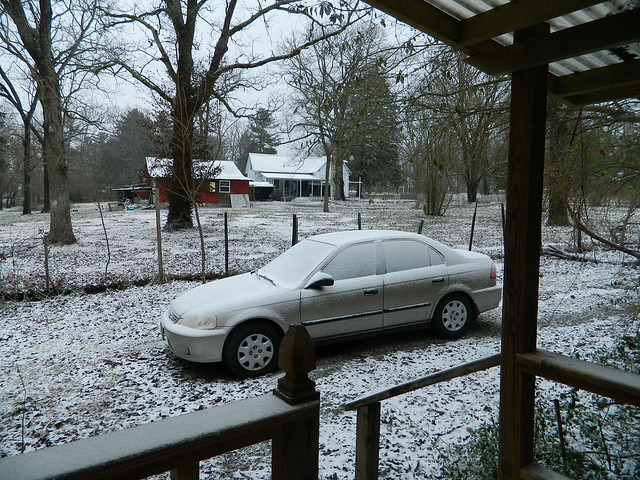 I’ve heard there were flurries off and on but, personally, I didn’t see a flake. If all the snow we’ve had were piled together, there might be enough to measure. These are the most anemic ones I’ve ever seen.

Cuz called today. I realized later there might have been something besides boxes in what she picked up from the large overstuffed chair I never sit in. I’ve texted her but haven’t heard back.

This afternoon, I took a shower. I can tell you right now that the temperature of the water I finished off with reflects the ambient air around the water tower. To say it can wake a person up is the understatement of the year.

Cuz told me she’s trying to sell the sugar babies. She looked sad when she said it and admitted she misses them. I suggested she could take them to live at her construction partner’s house and she laughed ruefully. She said she’d taken them out of their cages and played with them a long time. They’re cute little things. When I was a young girl, I wished I had one. I also wanted a monkey and a horse but I never got them, either.

Well, I hear PHil saw his shadow this morning. The ones around here didn’t so which will you believe? The only thing I know for sure is that today is my cousin’s 71st birthday. She’s a whole five days older than me.

Laundry is in the dryer. After I get it out, I’m going to bed. Tomorrow is supposed to be severe clear with a high of 47. I’ll hide and watch and see what happens.