Last night, I took my first bath since Thursday. I must say, it was nice. The water was so thick, I felt like I needed to take a bath after my bath. When I shampooed my hair, it hardly lathered all the first time so I did it again. It reminded me of Phoebe’s song she wrote in the shower.

It was almost 10 o’clock when I woke. This has GOT to change. It’s getting to be ridiculous but, to be fair, the sky was so heavy with clouds, it looked like it was much earlier. For the second day, there’s been no sunshine. Yesterday’s rain total was almost 2″. Today, there was little to none so that’s a big difference.

I’m not sure I’ve accomplished a whole lot. The call to dōTERRA took quite a bit of time. The first person I talked to said she would email an address label and, as soon as they got the kit back, they’d send the right one out. I asked to speak to someone else and he will issue a pickup. As soon as I can let them know the package has been picked up, they’ll send my kit out with two day shipping. I dug the half label out of the trash, taped it back on, wrote “Return to Sender” on the box and will put it out on the deck tomorrow.

Not much later, the doorbell rang. I thought it surely couldn’t be UPS and it wasn’t. It was Cuz. She’d texted last night and asked if the computer was ready. I’d told her it was an hour after she left it with me. I did another thing or two to it, shut it down and turned it over. She noticed I had my scruffy robe on. I explained that I wear it every day to do my body test with the Wii. I forgot to give her the terrycloth robe so she can give it to a skinny person.

DD was surprised that I only eat one square of the chocolate a day. The fig fennel is gone (that took four days) and I have two days left of the raspberry. I’m working my way to my favorite vanilla nib. It’ll take a while because I’m eating in the order shown here. 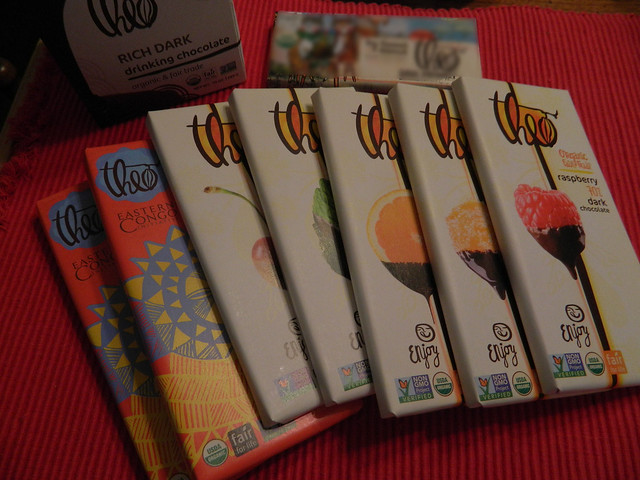 Next is ginger. I may skip that and go on to orange. Ginger and chocolate sounds like it will be extra yummy and I like to save best for last.

A couple of times today, my sister called for assistance on her computer. I walked her through getting to Windows Update and, sure enough, there were 49 updates to download and install. I don’t think she realized how much there is to reinstalling Windows. On a more cheerful note, the second owner of the notebook (the current owner is third) found the Windows 7 DVD.

During the first phone call, I was questioned about what I was doing. I replied that I was working on the lessons. She wondered how much time a week I spend on them. I’m not about to keep track to find out. When there’s something to be done, I do it. And now the first quarter of 2015 is finished and I’m glad.

Whether anyone likes it or not, I’m taking a break from such and will take up second quarter when I’ve recovered from this one.