Talk about cold! Winter has hit and it isn’t welcome. Most years when it’s mid-November, the days may be cool and a bit crisp but a light jacket or sweater is all that’s needed to be comfortable. Not now. When it gets down below 20 at night and struggles to get UP to freezing in the daytime, it’s cold. I know it isn’t the bone-chilling frigid weather Denver and similar parts are having but it’s still darn cold.

Remember my fix for the unused furnace last year? Yards and yards of Press’n Seal blocked out most of the cold air that insisted on coming in.

My handiwork was getting to be tattered and worn. There were places where the adhesive had given up and its effectiveness was gone. I’d bought some plastic that’s normally used to cover the inside of windows. It should be a lot better than the cobbled together barrier of yesteryear.

I was feeling pretty good, having survived the Terror of Radiation the day before. I got the kit out and measured off a length. Measure twice and cut once? Not me. Measure once, allow for mess-ups and cut. Cutting along the fold helped me keep it fairly straight. I’d put that part at the bottom, anyway, and use the factory cut at the top.

When I unfolded it, I thought I had unfolded it. I’d already cleaned the “frame” and applied the two-sided tape. Pulling the tape off the top piece, I carefully positioned the plastic and was pushing it into place when it shifted. HUH? It shouldn’t move like that when it’s stuck to the tape.

Uh-oh. I hadn’t unfolded it completely. I’d only unfolded it halfway. When I finished unfolding it, the excess was on the left, next to the bathroom door. THAT wasn’t good but I was committed. I’d just have to press it down on the right side and then the left. The plan was to then take my scissors and slide them down the corner to cut the long piece off as evenly as possible.

When I got through, this is what it looked like: 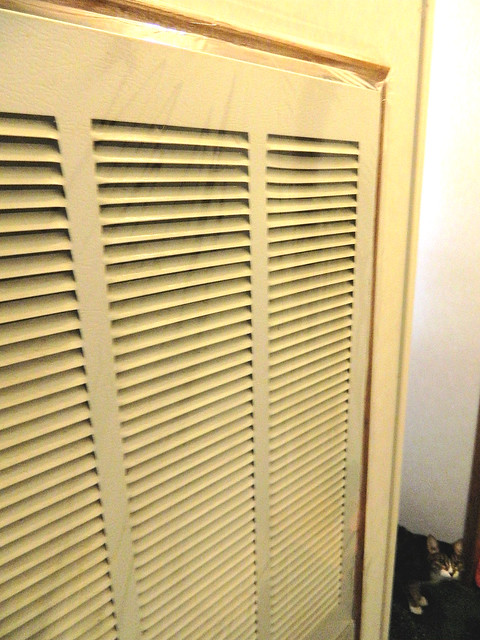 There are a few ripples here and there but I’m not going to try to see through it. No biggie. When I find my almost-new-roll of package sealing tape, I left enough around the edges to seal it again. I didn’t stick it at the bottom. I have a towel rolled up against it and all of the air that had been whistling through (well, not really whistling) is blocked.

I was on a mission so I pushed myself to do a lot more including laundry, changing the bed, cleaning out Twinkle’s cat box, etc., etc. When I was through, I was shaking. I think I overdid. At least Cuz came by and fed the animals. I saw her on the way back from the mailbox.

The nurse called from the pulmonologist’s office with my results. The barium swallow indicated that I have reflux. (I could’ve told ’em that before the test.) The doctor wants to put me on generic Prevacid in the morning and 300 mg generic Zantac at night. Should I take that in addition to what I’m already taking? What are you taking? Generic Prilosec 22 mg in the morning and 150 mg generic Zantac at night. Well, I could keep taking the Prilosec and double the Zantac. He wants me to get a wedge to put on the bed to elevate my upper body at night. I’ll get it but it may not work with my waterbed.

As for the CT, it is consistent with interstitial lung disease. Well. What a blessing. I was so nervous about having too much money in my bank account when this came along and took that away. My co-pay is supposed to be $100. When the person registering me asked if I wanted to pay up front, I told her I’d wait until the claim was processed. At any rate, I won’t be so filthy rich after this rescue.

After a full day, bed was very welcome. I didn’t set the timer so I slept until I woke up. Well, I slept with several interruptions to go to the bathroom. That’s a consequence of my upped intake to flush the barium out of my body. I’ve read not to be surprised if my poop was white. Well, I’ve yet to be not surprised. I hope that doesn’t mean I’m still bariumed.

With the time change, church has fallen back so I had an hour leeway. I planned to get there on time. HA!! One thing after another slowed me down and I got there for the opening song for the 11 o’clock service. I think they’d started early since the sermon via DVD was almost an hour long. I slipped into the bathroom and was pleased that I didn’t have to wash my hands with cold water. Someone had fixed the water heater!!

The bulletin secretary had called me yesterday to correct something in the online bulletin. While we were on the phone, she said she thought the quarterlies for Q1 2015 had come. Sure enough, they had and she gave me one.

I’d looked up the speaker but I hadn’t watched any of his videos. I had no preconceived notions either way even though I prefer having a live person up front.

The speaker uses a touch of a Mexican accent at times so it wasn’t easy for me to understand everything. When I got home, I looked it up and watched it again. It’s really good.

Cuz texted that she needed me to feed so I took care of that before sundown.

Twinkle is back to not eating much. I had to give the outside animals the parts she’d spurned this morning. I’m wondering if it has anything to do with how dry it is in the house. The humidity level is 36% beside my chair even though I’m keeping a pot of water on the stove that goes though about a gallon a day. I know my eyes are burning and the dry air contributes to that.

I’d think about getting a humidifier but the doctor says they can grow bacteria and make my condition worse. Worse is something I don’t want. Maybe I should get some artificial tears…

Glowing In the Dark
HOW MUCH??