It was another beautiful sunshiny day but still very cool. The peppermint seems to still be working to keep the critters from trying to break in where it’s warmer.

After taking care of my body test (my Wii Fit Age was 24 vs 20 the past two days) and a few other things, I broke out the paraphernalia to do the dreaded weekly deed. I’m getting better at filling the syringe from that tiny vial but my squeamishness is still hanging around. I aimed, almost hit my leg and chickened out many times before I made myself make contact. There was a bit o’ blood so I applied a bandaid. Some decorative ones would be nice but who would see them besides me? 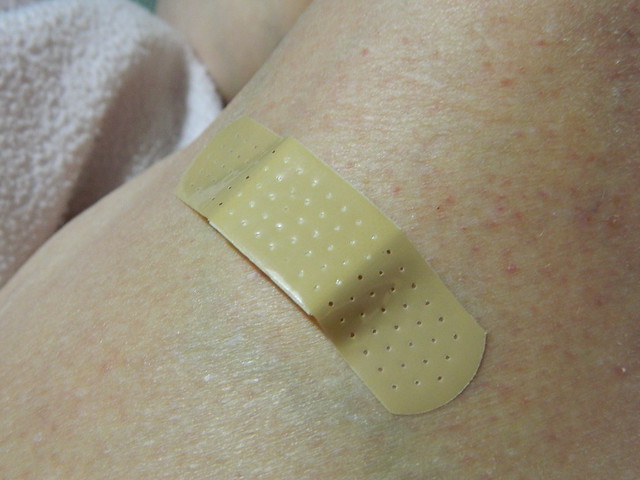 It was Cuz’ birthday and she gave me a present. She texted me that my CIL would be here to feed the animals. Wonderful!

My supply of apples is dwindling. I’d taken some to DS1 and my granddaughter (my DIL doesn’t care for them). I called and, don’t you know it! they are out of Fujis already. The same thing happened to me last year.

For months, I’ve wanted to cook congee but I’d never gotten a round tuit. Today, I decided it was going to happen. The recipe I looked up calls for 9 cups water, 3/4 cup long grain rice and 1 teaspoon salt. A comment underneath said the commenter is a traditionalist so s/he uses a 6:1 ratio water to brown rice. I was using brown jasmine rice and didn’t want to make enough to feed this end of the county so I used 5.5 cups water, 1/2 cup rice and 1/2 teaspoon salt. Not exactly half but close enough.

I’d started it early enough that I thought I could have some for breakfast. Well, that was fine if I wanted to eat my first meal of the day at 3 p.m. At breakfast time, it was still very watery (probably because I’d put too much water to begin with).

I stirred it off and on and made sure to leave the lid tipped a bit to let the steam out. I complained on Facebook about how long it was taking. One of my friends who has traveled extensively had never heard of congee. She googled it and then asked what I was planning to put with it.

There are many ways to serve congee. It can be plain, sweet or savory. I decided I’d bake one of my acorn squash and have it that way. I should have baked it longer but it was still good. 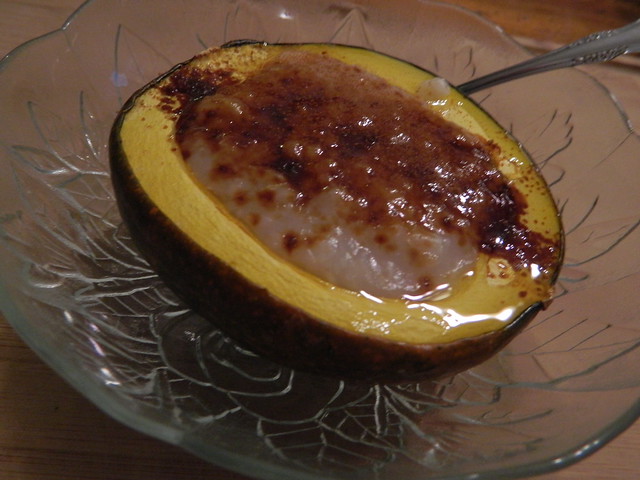 The top is sprinkled with coconut crystals

and dusted with cinnamon. It was really good. Tomorrow, I think I’ll cook the squash some more and just add it to the heated congee with the seasonings.

Twinkle’s been a happier camper today which makes it much more pleasant. Tomorrow, I’ll have to leave her all alone and go forth to SHOP. The days of the rolling store are past.

The Invaders
My Civic Duty

6 Responses to OOPS! I Did It Again.