The peppermint took care of what was trying to make its way into the house so when there was a scratching and clawing in my bathroom wall this afternoon, I decided I’d try the same. I’ve ordered some more since my supply is getting low. I poured it down the tub drain (unless it’s been fixed and I didn’t know it, it’s emptying under the floor). For good measure, I put a few drops in one of the sink drains and I do believe whatever it was has quit for now. I certainly hope so. I don’t want to be kept awake by such.

Cuz texted me this morning that she would be by today. I had to take it on faith because I haven’t seen anyone. Of course, I haven’t stationed myself on the deck, either.

There was sunshine! It made me feel oh! so much better even though it was too cool to get out in it. When I checked the temp at my sunning time, it was 41 degrees with wind. Thanks, anyway.

I was looking through my DIL’s pictures on Facebook and found this one of my granddaughter and Twinkle when they were both very young. 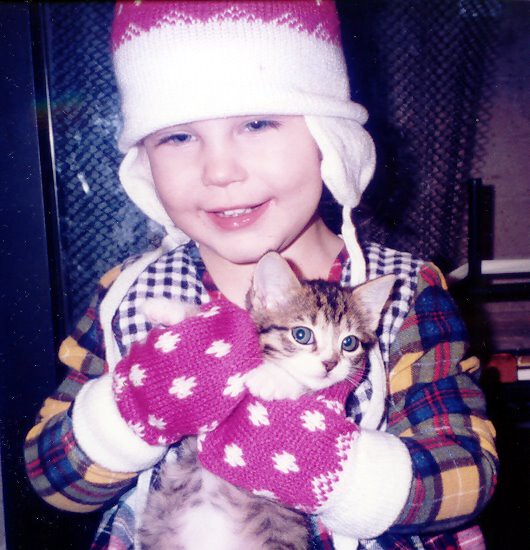 None of us (including the kitten) had any idea what we were in for.

Well, the kitten is now a cat and I think she had another episode of constipation. She’s been very vocal and anxious. This afternoon, she finally calmed down. I threw her laxative away long ago. It didn’t do any good and she hated it. I saw no reason to keep it around.

DD didn’t call but I didn’t expect her to. It was back to the Tiny House for another get-acquainted session. I don’t know if she’s trying to convince herself that she wants to go small or maybe not. Whatever she does is up to her. I’m not her boss any more.

My friend in the halfway house called. He worked 61 hours last week and said his knees really felt it. I’m glad he’s determined to make a go of it. Sometime in the next month or two, he’ll be graduating to home confinement. Mid-summer, he should be on his own.

I still have laundry to do plus cleansing my bod so I’ll wind this up and take care of the chores.

It’s Beginning to Smell a Lot Like Christmas
OOPS! I Did It Again.