You are here: Home › Blog › Raw Food Daze › Retirement › It’s Beginning to Smell a Lot Like Christmas
By Tommie on November 1, 2014 in Raw Food Daze, Retirement

IT started yesterday. I guess IT was appropriate for Halloween but I didn’t appreciate IT. IT was the incessant bumping and scratching and “trying to get in” sounds that happen whenever the weather starts to turn cold. This year, the weather didn’t ease into fall that could be enjoyed. No. Once again, there was no fall to speak of. One day it was summer and the next winter.

I banged on the walls which stopped the noise for a little while. Twinkle would look alert and interested but I was just aggravated. I don’t blame critters for wanting to be where it’s warm but they aren’t supposed to try to get into my house.

Months ago, Cuz said she would put something under the house to discourage such activity but she either did it and the effect has worn off or she never found that Round Tuit.

. I still had some in the bottle. From the scratching, I could tell whatever IT was, was trying to get in behind the dryer. I dripped a few drops back there and took the sheet off the register in the utility room and poured some drops into it. The noise stopped.

The utility room, kitchen, dining room and living room all smell like peppermint. The odor is very reminiscent of the holidays so maybe IT is either kin to Scrooge or the Grinch. For now, all is quiet.

Bless Cuz’ heart, I got a text saying she would be here to feed the animals. I opened the door, intending to go get something out of the freezer and changed my mind. It was raining and cold. I had enough in the house to eat for now. Twinkle didn’t stir from her chair. 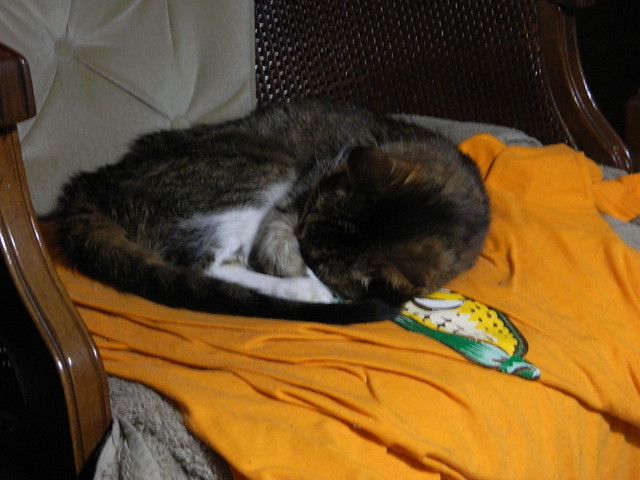 I’d considered fixing something for the fellowship meal but I wasn’t feeling any too perky so I decided I wouldn’t stay if I did go to church.

Last night, I was past feeling not perky so when I went to bed, I didn’t set anything to wake me up. I don’t know what time it was when I crawled out of bed and went to the bathroom to be greeted by this: 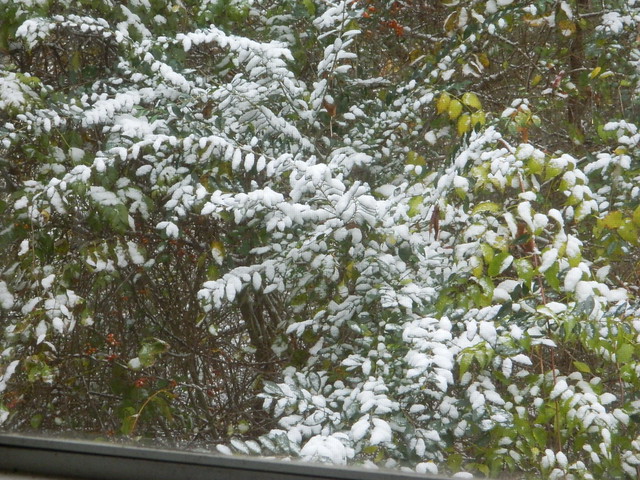 I opened the front door and shooed Big’Un away so I could step out on the deck and snap this picture: 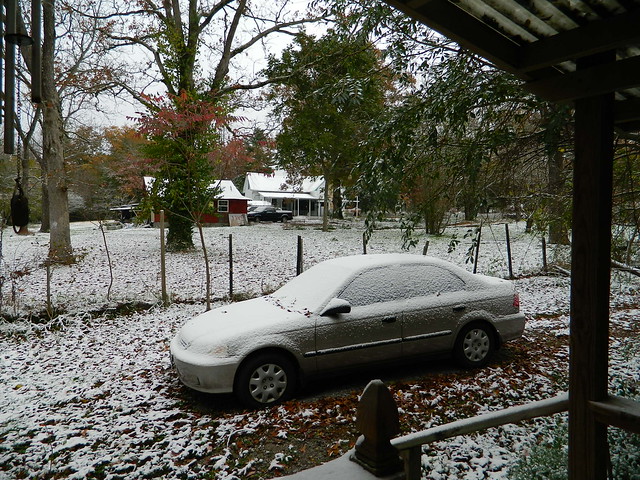 One thing sure and another thing certain, I didn’t feel up to clearing snow off the car to go anywhere. It was a distinct possibility that ice was underneath since it was raining before it got cold enough to snow. I was in for the duration.

I’d been wanting to hear the sermon from last Sabbath, anyway, so after I had my devotions, I watched the video while I ate breakfast. I guess Homecoming warranted bringing out all the musical groups because there were at least 30 minutes of strings, the full orchestra and choir. It was all good and I enjoyed being able to pause it and go to the bathroom without missing anything. After that, I watched the second half of DS1 singing with the male chorus.

The fortune cookie tea has become a part of my day so I collected all of the tags I’d saved. Some were repeats so I haven’t included them (as far as I can remember which doesn’t mean much).

That last one seems grammatically incorrect but maybe it’s the royal “our”.

The temperature never got above 34 today and that’s what it is currently. Tomorrow is supposed to be sunny and into the 50s which should melt the patches of snow that are hanging around.

Tonight’s the last night of Daylight Saving Time for those of you who observe it. And for people who think there’s an extra hour tomorrow—NEWS FLASH!! there isn’t. The earth still travels around the sun at the same rate. Even the government can’t do anything about that. And while you’re changing all of your clocks, I’m using that time to gloat.