According to my research (as I said yesterday), the best time for the body to manufacture vitamin D is when the sun is directly overhead. That’s at noon. Hence the dilemma. There’s noon which is mid-day and noon which is 12 o’clock. One is not necessarily the other.

I did some more googling. Seems the actual noon isn’t necessarily at 12, though it might be sometimes. It’s halfway between sunrise and sunset. You can calculate the number of hours between those two, divide by two, then add that number to the sunrise time to get the actual noon. OR, as I found out quite by accident, I can consult the nifty little program I downloaded from SunriseSunset years ago and have been using ever since. 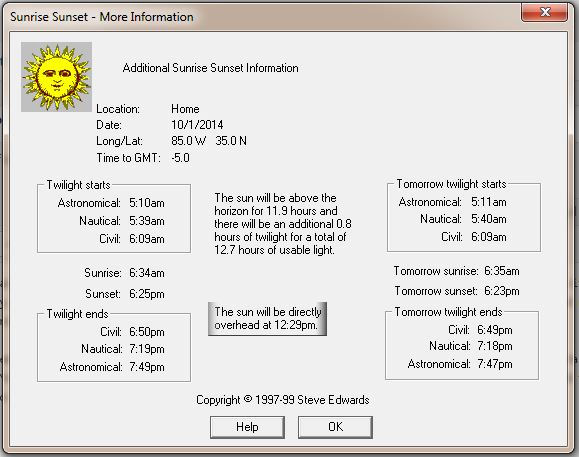 You can see where I enhanced when the sun is directly overhead–solar noon. All I have to do is check that every day, go out a few minutes before, stay until a few minutes after and voilà! I have my vitamin D for the day. I was already up to 15 minutes in the morning and 15 in the afternoon so maybe 20 total will do it?

It was hit or miss today but Big’Un didn’t care. He got his petting and that’s all that mattered to him.

Twinkle was down to two cans of food and I was down to one banana. Today was going-to-town day. On the way to Walmart, I heard on Talk Radio that Governor Jerry Brown had signed a bill banning one use plastic shopping bags in supermarkets and discount stores in California starting July of next year. Convenience stores and pharmacies will follow in 2016. I think that’s a wonderful plan and I felt so compliant with my Fresh Market bags. I was supposed to get these free but was actually paid to take them. I have all sorts of other bags but these are my favorites. 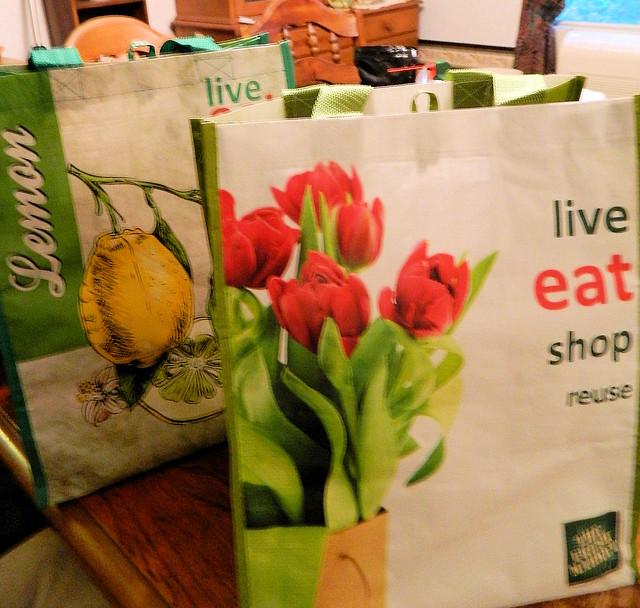 The main person on the talk show was praising the decision saying if he goes to buy five items, he ends up with 10 plastic bags because everything is double bagged. I’ve noticed things are packed maybe two or three items to a bag. Maybe the cashiers don’t have much faith in them?

I always have bags in the car—even if I forget and leave the ones at home I used previously. I’ve heard people say the reusables aren’t sanitary but I can throw most of them in the washer and dryer. I hate bringing plastic bags home. Every now and then, I’ll gather up what I’ve accumulated and recycle them.

When I arrived at Walmart, my first stop was to get my hair cut. The Tattooed Lady was the only one in sight. She’s gotten used to what I want so I was in and out in less than a half hour. I’d noticed a coupon on the back of the last Walmart receipt for a $9.99 haircut so I used it. Every little bit helps. Today’s receipt has another one that expires the end of November. I’ll probably have reason to use it, too. My hair grows much faster than it did years ago when I wanted to wear it long.

Shopping all done (and most of it wasn’t food), I went on to the Animal Hospital and picked up Twinkle’s supply. The nice lady had the coupon all ready but even with it, Twinkle’s food was more than what I’d spent on mine.

Back home, the critters were to feed. I pulled up to the other house and took care of them before I came home.

That’s been hours ago. Twinkle is asleep and I should be. Last night, I was in bed a full hour earlier than the night before. Maybe I’ll do even better tonight.

One more thing—I’ve been using an anti-keylogger that was set to expire in a few days. I’m not willing to pay yearly for such so I started looking again. I found KeyScrambler which is free for personal use. The other one (which will remain nameless) was a pest. It hogged resources and would pop up at the most inopportune times. This one just encrypts keystrokes and works with most, if not all, the browsers out there.

The free one doesn’t work with text editors. You have to have the Premium for that. I don’t use mine for anything that’s sensitive in nature so I don’t need to spend $45 for a year and half that every year after that to keep it going.