Can winter be far behind? I know that isn’t how it goes but it’s true and I’m not looking forward to it. If I can get some good persimmons, that will ease the distaste.

Yesterday, I got out for my solar power both morning and afternoon. Both times, I was accompanied by Big’Un. My sister is concerned there might be a family somewhere missing him. I could print up flyers but what would I do with them? I won’t go roaming up and down this road handing them out. There are too many dogs to contend with. If I posted them, no one would see them. I’ve mentioned before that the tip of his ear is gone. You can see what I mean in this picture. 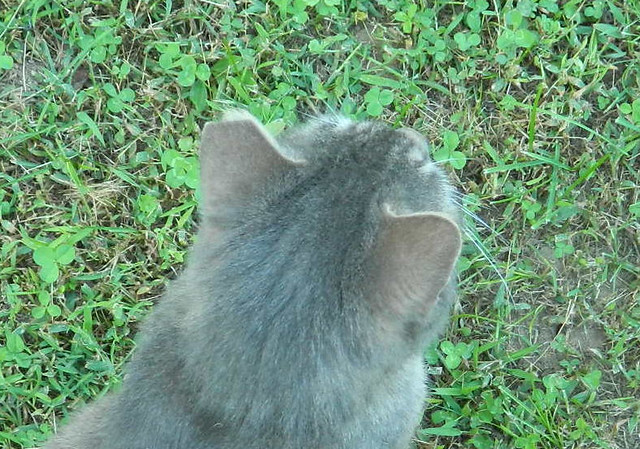 That could mean Big’Un is a feral cat that just happens to be friendly. Vets will spay/neuter feral felines and use either a notch in the ear or tip it to show the animal’s been fixed. His equipment has definitely been modified and the ear is too neatly tipped for it to have happened in a fight. So…Big’Un is free to leave any time. Otherwise, he’s also free to stay. Even better is the fact I don’t have to pay for his food.

My annual letter came from the billing department for my utilities. I’ve been paying $208 a month on the budget plan. With the new calculation, it’s supposed to be $207. That’s what sub-zero temperatures will do for the consumption. It was supposed to be much less than that last fiscal year but I’d budgeted for $208 and they agreed to keep it at that. There’s so little difference in the two amounts this time, I think I’ll just let it be.

Medicare and Humana are intent on killing as many trees as possible. I got a thick book from Humana regarding the renewal information. Medicare sent an even thicker 2015 handbook. I can get all the information online. I wish there were some way to cancel anything they send on paper.

Since I price matched six avocados Thursday, I took the ones in the fridge and made chocolate mousse. It was well into the afternoon so I didn’t intend to eat any. After I put what I could get out of the blender into a container, I tasted it. Then I got a clean spoon and tasted it some more. After that, another clean spoon was heaped and that was more than a taste. There was a lot left in the blender. A couple of bowl scrapers and my tongue took care of it.

I had a nice surprise yesterday. An email with the subject “Test” showed up in my inbox. It was from my friend who recently left federal prison for a halfway house. He’s a smart person. Of all the email services out there, he chose gmail. Every second or third word had a period and when I asked about that, he said he was still getting used to the phone and his fingers are too big. It’s a nice phone, though. An LG G3. Mine is an HTC G2. Big difference.

He’d asked for my phone number and I gave it to him. Last night, about 9:15, the phone rang. One time. I’ve had that happen and would be told it rang three or four times on the other end. I checked MagicJack and it was a number from his area code so I knew it had to be him. I called the number back and found he’d been aiming for the listing next to mine and missed. He said he would have never called that late. We had a short but nice conversation.

I didn’t sleep too well last night. I think it was all the chocolate in the mousse. It is rich and dark and yummy. Along about 1 a.m. TT, I got up and soaked in the tub for a half hour or so. That helped and I slept better after that.

It’s essential to face facts sometimes. I’d melted some of the GO Veggie! “cheese” on a piece of bread and there was that funny aftertaste and texture again. I checked the ingredients on both the Mexican and the Mozzarella and there was one difference—the Mexican had nutritional yeast and the other didn’t. It was a settled fact if I didn’t like what I’d tried, I wouldn’t like what I hadn’t tried, either, since it was essentially identical. I wrote myself a note to take it to the pianist.

Then there was the matter of the chocolate mousse. Now, I have no problem liking it. I’d made it with agave nectar this time instead of the maple syrup and it, in my opinion, wasn’t as good but it was still quite delicious. The fact remains that I didn’t NEED to eat it all so my note included taking some of it to Genese. I have no problem spreading the calories around.

Now, a nice bonus with the cheesy situation is that it was packed with four Re-Freez-R-Brix. They are pretty nifty. One in my little “I Love Chocolate” tote keeps things cold for hours and it’s still frozen when I get home. I packed the GO Veggie!, the chocolate mousse and some of the eggplant I’d fixed the other day.

Class was already in session when I got to the church. I’m making up for all those mornings I was there to unlock the door or shortly after.

My hearing aid batteries were on their last legs so I changed them, sitting there on the back row. They weren’t to the “doodle-de-do” stage but close. That reminds me. Today is my audiologist’s birthday. When I wished her a happy one on Facebook, I put “Hear, hear!” Chortle, chortle, tee-hee snort.

Church service was interesting. The sermon title was “Diet: A Matter of Salvation?” I never did figure out if it is or it isn’t. I do remember the verse that says, “Whether therefore ye eat, or drink, or whatsoever ye do, do all to the glory of God.” (1 Corinthians 10:31) Wonder if that includes chocolate mousse?

The Computer Owner had the special music. She played an arrangement of “Holy, Holy, Holy” on the piano and later told me she was intimidated by my being there because I would count all the mistakes. I assured her I don’t do that. I especially appreciated it when she played with feeling and did the little flourish at the end. That piano is quite loud and it’s hard to tone it down but she managed to do it during the second half.

I was talking to one of the pianists and she suggested my cough might be aggravated by PND. I’d thought about that before but I don’t really want to take anything to dry it up. Guess I should put that on my list for the next visit to the pulmonologist and then he’ll probably want to send me to an ENT. And the merry-go-round keeps spinning.

My Personal Shopper had brought me a quart of Vegenaise. Somehow, she’d managed to crack the lid. Thankfully, I keep the lids from the empties so I could replace it. I asked her if she would knock some off for that. Like 20 lubs?

From the church, it was on to the nursing home. One of the fellows in housekeeping saw me come in the door. He remarked he didn’t see much of me any more—am I retired? I told him yes, I am. I figured him for my contemporary or not too far behind so I asked him when it would be his turn. I was quite surprised to find out he recently had his 60th birthday.

Stopping in the cafeteria, I got a couple of bowls to put Genese’s treats in. Two of the ladies came out and were telling me about all the people who have already retired and one who will be retiring soon. No surprises there. The more the Mother Ship pushes, the more people leave.

Genese’s mother and aunt were visiting when I got to her room. She tried to get her mother to try the mousse but she refused. Maybe she knows the ingredients and they seem a bit weird. The ladies left to go eat lunch with Genese’s sister.I hadn’t intended to stay long because my breakfast was only mousse and a banana but we started talking about food.

Cuz had texted me this morning that no one would be by today so I pulled up to their house and took care of the critters.

It was cloudy so I came in, changed my clothes, drank my water and ate. The sun came out later but it was ‘way up in the afternoon and I doubt I would have gotten any vitamin D from the exposure.

Twinkle has been nudging my foot. This afternoon, she was begging for food when she hadn’t finished what she had. I rearranged it on her dish and she ate it. Silly cat.

Half a Dose
Messed Up