Cuz called me this morning. The phone only rang once and since the handset closest to me was dead, I didn’t get to it in time. I called her back and asked if she’d dialed my number by mistake. She usually texts me these days but she said no, it was intentional.

She would be going to the other side of the mountain to pick up some things and would stop by here and feed the critters. We’d also “chit-chat” while she was around.

I went ahead and got my 15 minutes of sun in (accompanied by Big’Un) and ate breakfast.

When she got here, I was still in my robe because it was cool and I was shopping for warm at-home clothes for this winter. Mother’s dresses definitely do not fill that bill.

She sat down on the loveseat and we visited while Twinkle took up residence on my lap. Before she left, she mentioned that her computer was being plagued by “popups all over the place” and they were driving her crazy. It was on the table at her house and I was given permission to have at it.

My bananas had run out yesterday and I was in need of several other things. I got ready and set out for town. I was armed with a few coupons and price matches from Save a Lot and ALDI. (Did you know that ALDI stands for “ALbrecht-DIscount”?)

After I’d paid for my things, I went to Customer Service to give them a printout of So Delicious non-dairy ice cream flavors. The So Delicious site is set up so a person can print off everything needed, including bar codes. After two people had refused to take it, one of the supervisors paged the grocery manager. I was directed to a bench where I could wait for her. One of the employees was sitting there, waiting to clock in. Seems they have the same requirements as one of the departments at the hospital did. Clocking in has to be right on the hour. I commented that I’m so glad I’m retired.

By and by, she got clocked in and the young woman came up to see what I needed. She has long dark hair and braces on her teeth. I’m not good at guessing age but I’d hazard she isn’t over 25.

I showed her my printout and explained that SD is non-dairy. In the course of the conversation, I told her that Mother had decided I wouldn’t eat meat and I’d taken that a step further over nine years ago and went vegan. I didn’t go into my foray into raw food for almost five years of that time. Her eyes opened wide and she said, “Oh, that must be HARD!” Well, no. I didn’t say so but everything in the fresh fruit and veggie line is vegan. I did tell her there are few intentional vegan options at Walmart but lots of “accidental vegan” which is mostly junk food.

My printout had my name, address and phone number. She’s promised to see what she can do about getting more vegan foods into the store. If she can, wonderful. If she can’t, I’ll survive.

Once again at home, I unloaded and put away. I got the leftover mac ‘n’ cheese out of the fridge and put it in freezer containers. There was maybe a half cup left that I decided to eat for supper. When I took the containers out to the freezer, I noticed how pretty Cuz’ burning bush shrub is. I came in, grabbed my camera and went back out. 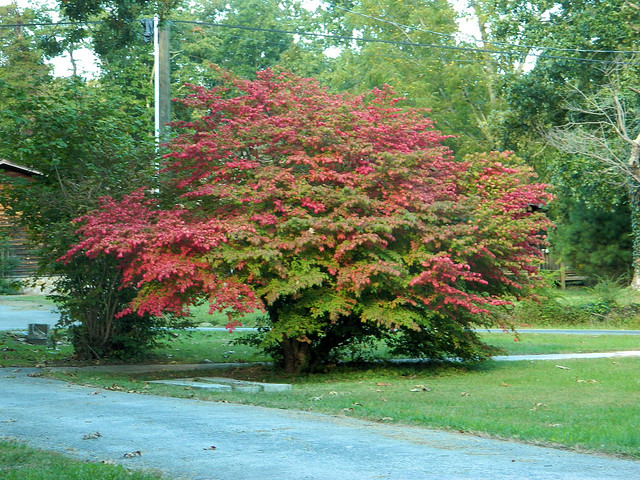 My CIL wants her to cut off the lower limbs to make it easier to mow but she refuses. She’s the one who mows so I think she has the right to decide not to lop them off.

While I was snapping away, guess who was keeping me company? 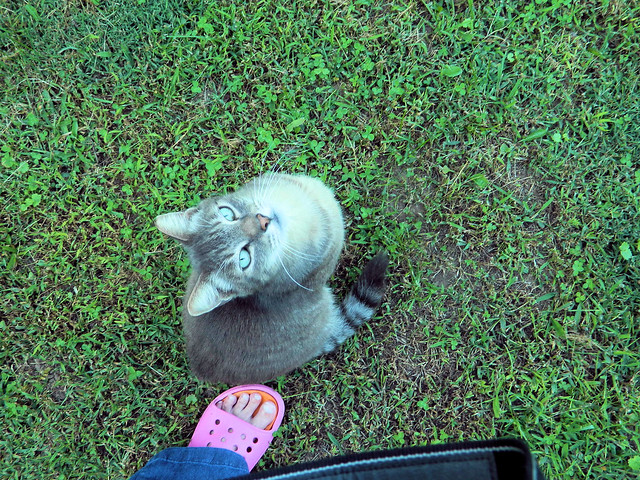 Do my toes look blue? The Computer Owner was sitting with me Sabbath and insisted they did. Well, she said they looked “bluish”.

Big’Un tried to come in the house today and that caused an uprising. Twinkle let it be known in no uncertain terms he wasn’t welcome.

I retrieved the computer and found that Chrome had some extensions installed that were causing the popups. I deleted them and that took care of the problem. Running MalwareBytes and SpyBot helped, too.

Well, I didn’t get my afternoon sun in. There’s no making up for it. I won’t get the morning edition in on Sabbath. I guess I’ll just have to do my best and be faithful with my vitamin D drops.

Always a Boy
If Fall Is Here…

4 Responses to Half a Dose