Today’s been a busy one. Yesterday, the girl from the clinic called to remind me of my appointment to see my PCP this afternoon. It was my annual wellness visit and I was only five months late.

After an extended phone conversation with a rep from the Mother Ship’s retirement plan, I started for the bathroom when I saw a package on the deck. No one had knocked, rung the doorbell or hollered.

A bit of history is necessary here. Last month, a rep from GO Veggie! had contacted me and said she noticed I “write a lot about Daiya” (I didn’t realize I did that much) and would I be interested in trying their products? Well, yes, if they are vegan. Send ’em on.

When they didn’t come and didn’t come, I emailed and asked about it. With my problems getting packages delivered correctly, I could just see someone melting vegan cheese over a big ol’ hamburger. She assured me it would be sent out soon and here it was. 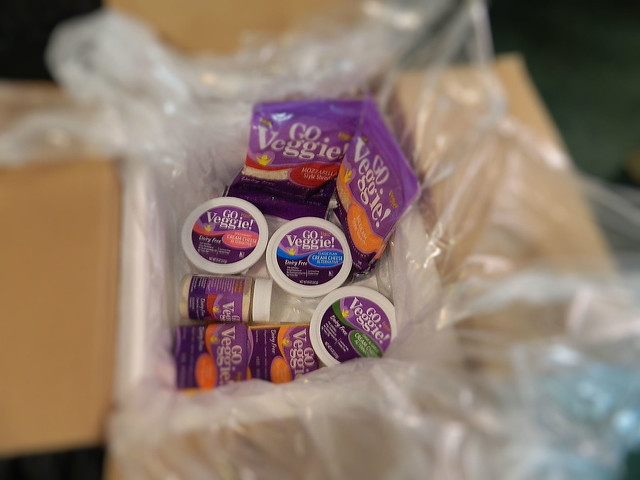 I hadn’t eaten breakfast yet so I decided to have a slice of American toasted on a piece of bread (in addition to the rest of my scuppernongs and half an avocado). Now, not having American cheese for more than nine years might make me one of the least likely to rate it in being similar to the genuine article. I haven’t even eaten Daiya American cheese (I really don’t think they make that variety). However, I do remember that the slices aren’t oily to the touch (maybe that’s to keep it from sticking too badly to the plastic) and they aren’t 1/10 of 6.7 ozzies.

As for the flavor, it tasted like nothing I remember ever eating before. I read the ingredients after I ate it and was a bit put off by the fact that one of them is carrageenan. Daiya doesn’t use carrageenan. That’s a strike against GV slices.

After breakfast, I did a few things that needed to be done and got ready to go see the doctor. I arrived a few minutes early and got all checked in. A lady I used to see at the hospital came in and sat beside me and we visited while we waited.

Following my humiliation at being weighed, I was shown to the exam room. The nurse took a brief history, keying it all into one of the cast iron laptops supplied by the Mother Ship. My blood pressure wasn’t accurate. The automatic gizmo they use inflated to the point that it felt like my arm would be bruised. I’m sure the result was higher than it would have been otherwise because I was in pain. At least my O2 sat was 98 and I could trust that reading.

The doc came in and he was a sight for sore eyes. We talked and he checked me over. The crackles in my lungs were no more pronounced than before. He ordered a laundry list of lab work and the “paperless” system printed off each one individually. Used to be, they’d all go on one sheet. So much for saving trees. He was satisfied with the state of my health, considering.

I had a package to mail when I left there. When I walked into the post office, one of the ladies from church was at the counter. Her three boys were along for the ride. She hugged me and said they’d missed me at church. I told her my boy had turned 50 and I’d gone to help celebrate.

I’d ordered a pair of shoes and they were too big. First time that’s ever happened. The company had sent a return label I could use or I could elect to pay the postage up front. The label was $1 less so I went that direction. In addition to being cheaper, it gave me a tracking number.

The bank was my next stop. I had to get a statement verifying that I am who I say I am. My retirement account has “R” to match my driver license (which includes my maiden name) and my bank account has “S” because my middle name is Sue. The lady who typed up the statement for me (on an honest-to-goodness typewriter) is someone I’ve dealt with before. She’s very sweet and when I was ready to leave, she came around the desk, hugged me and told me she loves me. Now, that’s a Southern Belle for you.

Cuz had texted that my CIL had been here yesterday and they’d be home tomorrow. That left today for me to do the honors. I pulled into their driveway and took care of the babies and the Catz.

When I got back in the car, two dogs were behind the house. I blew the horn and the Catz scattered. That wasn’t my intention. I sat there until I was sure the dogs wouldn’t get the Catz’ food, then pulled around. One of them followed me to my house and I had to shoo it off. The larger of the dogs was wearing a collar and it looked as though the other one had been, too. I’m not anti-dog, necessarily, but they don’t need to eat cat food.

Back on Sabbath, the “cafe” Sabbath School class had a buffet with various breakfast items. I’d gotten a bottle of apple juice but it was too cold to drink. I’d dried it off and put it in my purse to warm up and forgot about it. I discovered it today so I drank it after I drank my water.

Supper was two peaches, broccoli and some more toast with cheddar slices (carrageenan included). The cheddar doesn’t taste as much like cheddar as Daiya cheddar does and it has a weird aftertaste. Also, it melts but it doesn’t stretch. It just goes to liquid. When it cools, it’s a grainy blob. Sorry. I’m not impressed.

I’m thinking that, tomorrow, I’ll make side by side mac ‘n’ cheese using Daiya shreds in half and GO Veggie! shredded cheese in the other half. Except for those two things, the two dishes will be identical. At least the shredded GO Veggie! doesn’t have carrageenan but neither does the Daiya.

Twinkle seems to think she’s supposed to be fed and I have to drink my water. It’s time to cut the cheese (snicker snicker snort) and go on to other things.

4 Responses to Hangin’ In There