A year ago right now, I was inhabiting Cuz’ couch. My CIL had it all ready when we got home from the hospital where I’d had gallbladder surgery. Everything is supposed to be healed now. Too bad that doesn’t include my lungs.

Last night, I was walking through the bedroom, into the bathroom, back into the bedroom, round and round. My pedometer was close to a round number and I was making sure it got there. When I stopped, I started coughing. I coughed and coughed until I threw up. Three times. It wasn’t food, though. It was clear mucus. TMI? Sorry. I’ve felt better since I got rid of it so I’ll look at it as a good thing.

I’d settled in for the duration when it hit me I’d left the laundry in the washer. I had to get up and go transfer it because Twinkle is totally worthless when it comes to operating the dryer.

I took a couple of bags of trash to the outbuilding where such stuff lives until it’s hauled off and then returned the remaining dried cranberries. Cuz had said for me to put them in the fridge if I didn’t want them. The Catz were looking expectant so I gave them a bit of food.

My trip to the mailbox netted me the Shopper and, thank goodness, it has an ad for Save a Lot bananas for 49 cents a lub. I’ve cut it out and stashed it with the rest of my ad match ammunition.

Coupon printing didn’t go so well. After cleaning the print nozzles countless times and changing ink cartridges, I’ve printed off coupons for Silk that may or may not work. It wouldn’t matter if the color wasn’t right. The bar codes aren’t clear. I have ink on my fingers that’s going to have to wear off.

Exercise!! I did 23 minutes while I watched Kevin get all twisted up in knots, as usual. Since Winnie was taller than he was at that point, most of their scenes were shot while they were sitting down.

This afternoon, there was a knock on the door. My CIL was standing there with a quart of apple pie filling, the dried cranberries I’d returned and a bag of goodies from the tiny garden Cuz planted at their alternate roost. 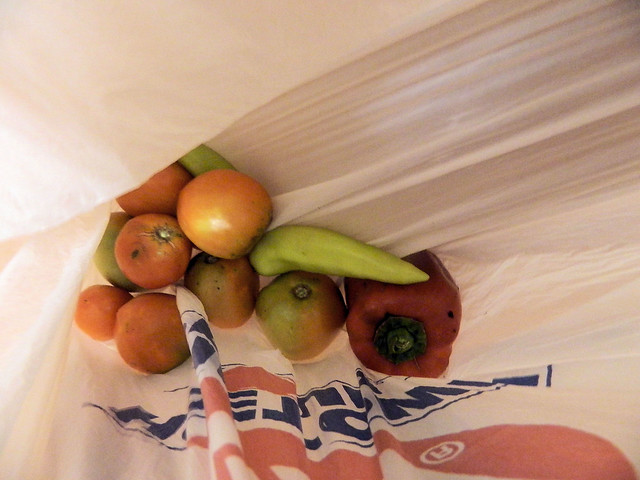 After he left, I noticed the lid on the jar of pie filling was protruding. I called him and asked if it was supposed to be sealed. Yes. They’d canned 17 quarts yesterday. Well, this one hadn’t sealed. He assured me it would be okay, anyway. I started to open it and it spewed a bit. Cleaning up the syrupy liquid, I tried, in vain, to open the jar. I beat on it and ran hot water over it. Nothing worked.

I’d started over to the house with said jar when I heard loud music coming from the garage. He was out there with the old Cerwin Vega speakers DH had bought lo these many years ago cranked up and shaking the rafters. They’re hooked up to the old Pioneer amplifier and the CD player DS1 gifted me with is hooked up to everything else. The speakers the Squatter left might figure into the mix, too. At any rate, it was quite a racket.

He spied me and turned the sound down. I explained I couldn’t get the lid off. He set it on the freezer and put his muscle into it. When the lid came off, syrup poured out. He’d warned Cuz not to fill the jars too full but the apples were even with the top. I have a feeling they’ll have some re-filling of jars and reprocessing to do if all of them were packed that way.

While I waited, he went into the house and came back with washcloths to clean up the mess. I brought the jar back and washed it off. I tasted the syrup and I’ll have to put lemon juice with it. I’ve come to the conclusion my sweet tooth isn’t as sweet as it used to be.

The weather has cooled off just a little bit. It was raining earlier but it was a soft, gentle rain—not the pounding fireworks-included rain of the past couple of days. I slept well last night and should tonight, too. It does bode well for that.

Sedentary
Another Line on My Resume

2 Responses to My First Anniversary