Yesterday was full of the usual happenings. I won’t go into all of them but my breakfast was noteworthy. For years, I have hungered after Elberta peaches. I do believe the ones I got at Walmart are Elbertas. One was ready to eat so I peeled it and took a bite. Ah! YES!! The flavor and sweetness of the late peaches are so much better than the early ones. 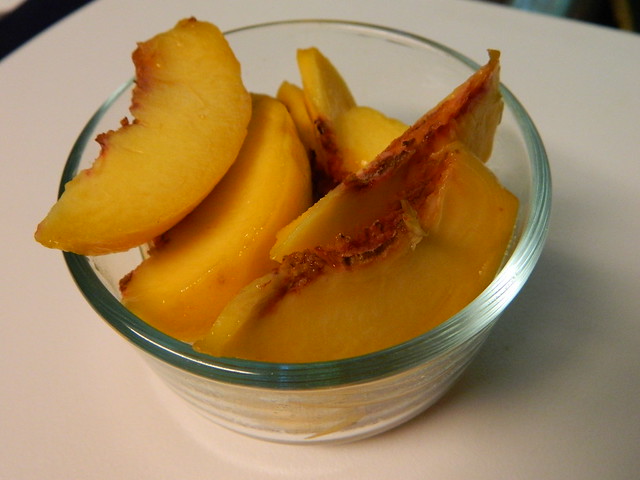 The one cup bowl wasn’t big enough so I transferred it to a two cup and added blueberries. 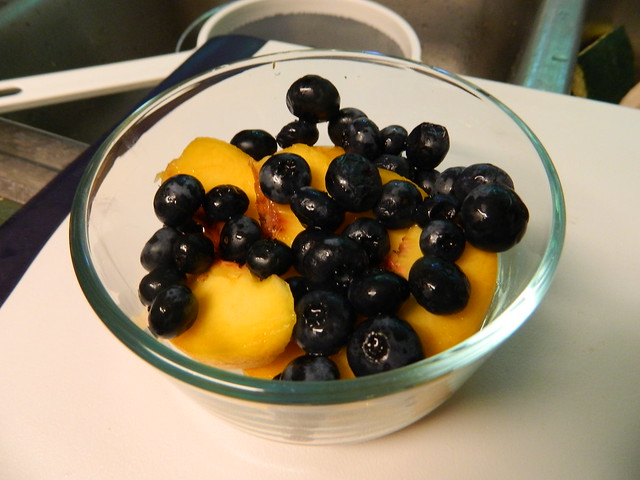 I’m looking forward to the rest of the peaches.

Imminent chores were taken care of and I got busy on Fixing Food for the 102nd birthday celebration of one of our church members. He’s the pianist’s father-in-law and today was a special fellowship meal in his honor.

Half the watermelon was cut up and put into a container, then stowed in the fridge. I had some Beanfields’ bean and rice chips to take plus some rosemary and olive oil crackers. I’d bought a package of Great Northern Beans that has that little packet of seasoning in it. My coconut water needs to be used so I decided to cook the beans in it. I used 2 1/2 cartons with a 20 ozzie package of beans.

After I brought the beans to a boil, I let them sit for an hour before I transferred them to the crockpot where they cooked on low all night. This morning, I tasted. The coconut water had reduced and the beans were sweet! It took me a long time of playing “Fix That Dish” to get them so they tasted okay. I added onion powder, garlic powder, Himalayan sea salt, kala namak and the little seasoning packet.

When I tasted it next (by that time, I had a good collection of “tasting spoons”), it was too salty. I got a good sized potato, peeled it and cut it into 16 pieces. After THAT had cooked, the beans weren’t as salty OR as sweet. It was good to go.

The preacher was preaching when I got inside. l spied Cuz’ sister (also my cousin) and her husband (my CIL) siting on what I consider “my” pew now. I went in and sat with them and another of my friends.

I’d already pretty much taken care of my food so when church was over, I didn’t have that much to do.

There were LOTS of visitors and more food than we could all eat. I wasn’t terribly hungry. I was listing off my breakfast to my pew-mate and she was amazed. She’d eaten nothing and was starved. I’d had half a banana (I would have eaten the whole thing but the cashier had put them in the bottom of the bag and guess what), some millet rice cereal with almond milk, a piece of toast with mashed avocado and a cup of chocolate almond milk (to wash down my vitamins).

I kind of hung back until most people had gone through line and figured the watermelon would be gone. Not many were brave enough to try my beans so I took a few to see how they really tasted. There was still a lot of melon left so I filled a little bowl. When I got to the table, I ate it first and then the rest of my food.

Visiting for a little while, I gathered up my things and took them to the car. The heat hit me hard after the air conditioned building so I didn’t go back in.

The Catz were hanging around when I got home. I knew they’d been fed because plans had changed and my cousins were still home this morning.

I fished the potato out of the beans and put it in the fridge. Containerizing the rest of the beans, I took them out to put them in the freezer. All five Catz were right there with me. I guess they thought I was going to feed them. Surprise!

It’s been hot this afternoon. My newest little fan is doing the best it can, pulling cooler air in from the utility room window. 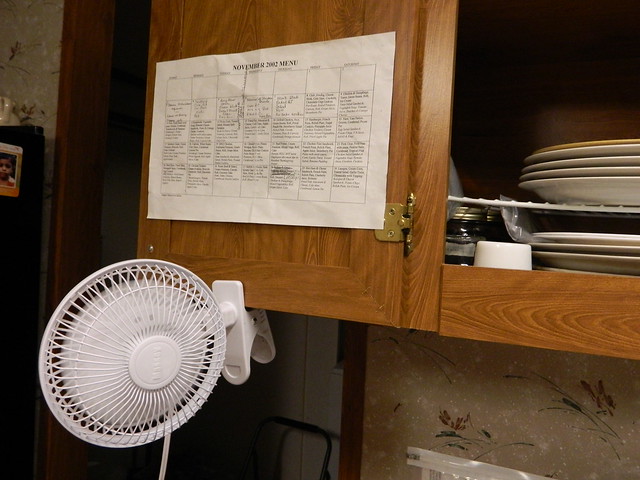 Here’s a closeup of the ancient menu on the inside of the cabinet door. 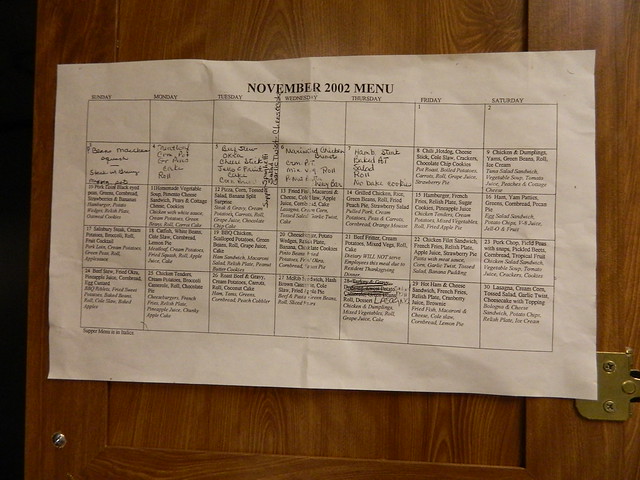 My electric bill used to come on the 1st of the month like clockwork. Now, it’s usually later than that but it was in the box today. I opened it a little while ago and it isn’t as low as my sister’s but I’ve used 174 fewer kwh than I did this time last year. Currently, I have a credit balance of $175.78. The end of next month is the end of the fiscal year so we’ll see how much leeway I have when it rolls around.

Not long before sundown, it clouded up and started raining. There was a humongous clap of thunder that followed what sounded like lightning hitting somewhere close. It’s been raining off and on since but no more fireworks that I’ve noticed. The wind has picked up and it’s cooling off. Anything under 80 and I feel like I need a blanket.

Tonight, I had an email from Walmart. My latest Savings Catcher receipt had been processed and no lower price was found. Well, NO! I’d done price match on the blueberries and not at the store they checked. If I lived in an area that had more stores, this might work better. 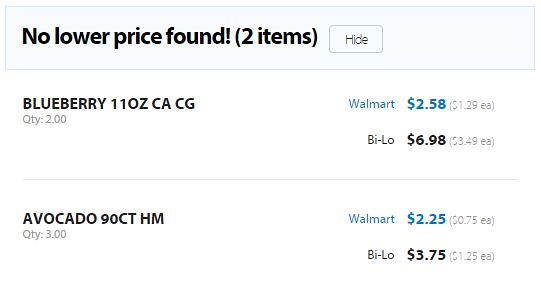 Oh, and I hadn’t realized a pint of blueberries is 11 ozzies.

One of my sisters emailed yesterday that our other sister’s Internet was down. I don’t know what the status is now. I do know the thunder and lightning is getting close and the rain is pounding down. Good sleeping weather.

Oh, CRUD!!
Time for the Next Wave