After a good night’s sleep, I got up and flipped the switch on the power bar. That turned on the light in the salt lamp. It flickered, then glowed brightly. I didn’t think anything about it.

Later in the morning, I went into the bedroom and the light was off. I remembered turning it on but, to make sure, I flipped the switch again. Nothing. The bulb must be burned out.

I’d bought bulbs several months ago because they do eventually give out. The salt rocks were fused together. It took several minutes to pry them apart and, at one point, I had to get a knife to help. When they were all out, I changed the bulb, flipped the switch but, again, nothing. This will be a project for someone more acquainted with the intricacies of electricity than I am.

Two garbage bags were decorating the living room so I took them over and put them in the shed. Four Catz showed up. I think I must overfeed them because they are much slimmer when my CIL takes over. I had to tell them I wasn’t there to give them food and they looked disappointed.

Breakfast was finally peaches. I chose two of the least green ones and mixed in some blueberries and banana. 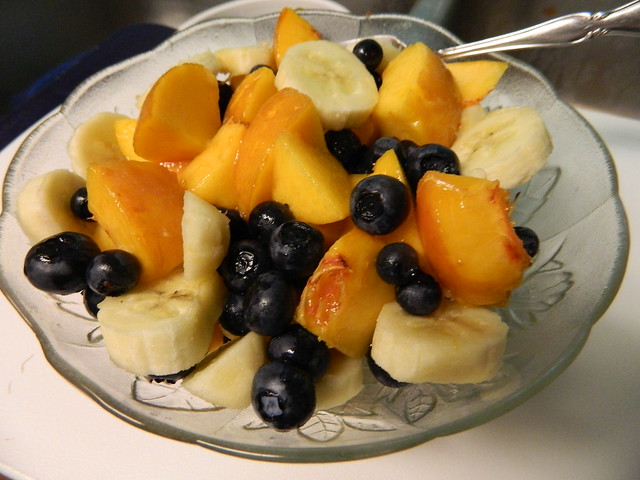 The peaches were sour. I ate all of the banana slices out of the bowl and then added some organic evaporated cane juice. I don’t like sweetening fruit but the peaches weren’t sweet at all.

The moth has vacated the premises. It had its wings spread this morning, then folded them up again and now it’s gone. Whether it flew away or fell off the screen, I know not. What I know is that it isn’t there.

I’ve worked on the lessons today and am into the beginning of the fourth one. There are still little fiddly things to do in them but, by and large, they’re ready for the next step.

It’s been cool enough today that I’ve turned two of the fans off. Twinkle has, at times, occupied the heating pad. At the moment, though, she’s on what’s become yet another favorite spot and soon, I’ll be in mine.