Mimosas are in bloom and I coulda sworn I had a picture or two of the blossoms on one of my favorite trees but I don’t. I went to Flickr’s Creative Commons and found this one. 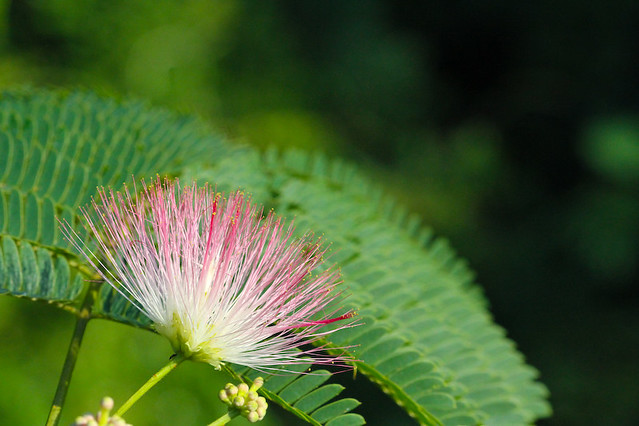 Today has been a better day, physically. Otherwise, it’s been a bit stressful. The editor sent out a blast email to give her feedback about the way the lessons load. She said they are coming up very slowly for her but they pop right up for me. To make sure, I was going through all the weeks and when I got to 12 and 13, lo! and behold! (My sister would have added, “and high and be dropped!” the changes I had made—or thought I had—had disappeared. I downloaded them to make sure I had the latest files and redid everything.

Then I started checking more closely. The images the HTML person had uploaded to the server weren’t, for the most part, inserted. I don’t know if it’s something I had done or if he hadn’t put them in. I muddled my way through and inserted all of the missing ones and learned something new in the process. It’s something I’d never done before.

When I reported the changes, I didn’t mention inserting the images. It might be assumed that’s something Yours Truly could do if necessary since I know how now.

I’d never seen “It Could Happen to You” so I took a break from my hard work and watched it. Then I exercised for 23 minutes, according to my pedometer.

The katydids are getting louder and louder. There was one lone one rasping this afternoon but it has been joined by a cast of thousands tonight.

I haven’t seen my CIL but Cuz would have called me to check on him if he hadn’t been in touch with her so I’m sure he’s okay. Since they have a/c now, I guess he doesn’t need to leave the back door open. I have some avocadoes to give him but I don’t want to disturb him.

The days were getting away from me and I’d be drinking my last 16 ozzies of water too late. I got smart and now I set the timer on the computer for 90 minutes after I finish a meal. That means I don’t have to get up as often in the night.

The Visitor is still on the screen above the kitchen sink. Genese commented on yesterday’s post and said it’s an imperial moth and gave me this link. The moth doesn’t eat but lives on what it ate as a caterpillar. Its life span is about a week. The one that’s adopted me moves around on the screen, though I haven’t seen it do anything but sit. It will be interesting to see how long it stays there in the space of maybe eight inches square.

The Catz have been camping out on the deck and Twinkle was busy hissing at them this morning. It probably makes her feel important to let them know this is her territory.