We’ve had Blackberry Winter, Dogwood Winter, Indian Summer. What we’re having now, I have no idea. It’s much cooler than usual for this time of year. Yesterday morning, it was 62 in my bedroom when I got up. This morning, 66. Oh, yes! The Polar Vortex. That’s what it is.

Cuz left yesterday after coming over to tell me goodbye. She and her construction partner are going on a working vacation to Florida. The van was packed with stuff for the Housesitter. Where she’ll put it, I have no idea. It seems her little trailer is already bursting at the seams.

The animals fed, I didn’t have that chore to take care of. I did some things around the house here and had my shower well before dark. Twinkle’s food was set out and I was in bed before 9.

I woke in the night and was awake for I don’t know how long. Seems to happen when I go to bed early. When I did let myself look at the clock, it was 3:48. By and by, I went back to sleep and dreamed strange dreams.

The HTML person had sent out the first draft of the 4th quarter lessons and I spent ‘way too much time trying to figure out where the missing closing quotes are that mess everything up from October 31 on. When I went into the church, it was almost time for the meditation music.

One of the elders stopped me and asked if I were playing the organ today. Well, no. I told him I’m not authorized to play any more. “Ever?” “Well, for at least a year. Don’t you think I’m due a year off after more than 25 years of playing?” He agreed that was reasonable.

The pianist was doing double duty today. She played the meditation music and music for the song service on the piano and then switched to the organ.

I guess the signal light still doesn’t work. She had started playing a second song when the deacons and elders came in. I think it was “Jesus Loves the Little Children”. The procession caught her off guard and there they went to the front. I was probably the only one who noticed she wasn’t playing the introit.

The pastor has been encouraging more friendliness in church. He said that if anyone was sitting alone, someone should go sit with them. I was all by myself (and quite happy) on the back row. One of the ladies came to invite me to sit with her and her friend/significant other/husband (I have never known which it is). I told her it was warmer where I was which is why I sat there. Then the Computer Owner got up and sat with me. For years, I have sat in the most alone place there is—the organ bench—so it doesn’t bother me to go solo.

Once home, I texted Cuz for the second time today to see if anyone would be here to feed the critters. I got the answer to please take care of them. I’d taken my top off and put on my housecoat so I went over before I finished changing and did the honors. On the way back, I stopped and got a carton of coconut ice cream out of the freezer.

Twinkle had begged for food so I fed her and it wasn’t more than a few minutes I heard her retching. That’s not a welcome sound to a cat’s human’s ears. When I went looking for the spot to clean up, I found three. Going into the bedroom, I found a fourth. After that, I gave her very small amounts several times so she wouldn’t eat too fast and she’s been okay so far.

I’ve been cool so I knew Miss Twinkle had to be cool, too. I got the shirt I’d worn yesterday and put it on the chair with the heating pad. She still wouldn’t jump up on it so I got her and placed her on the shirt. She smelled it and eventually settled down. 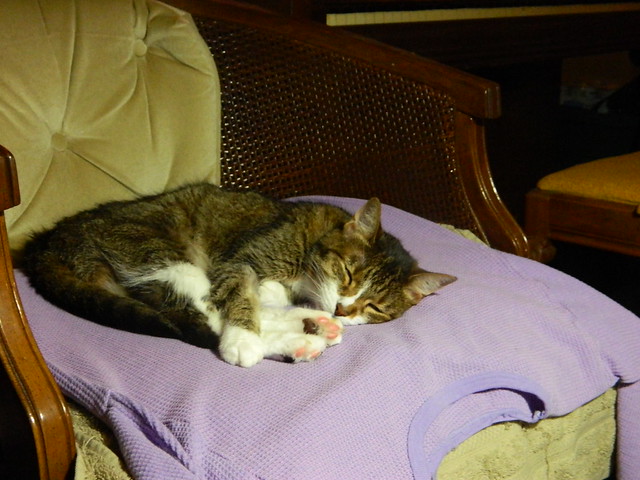 It’s been misty and foggy all day. I went out on the deck to take a picture 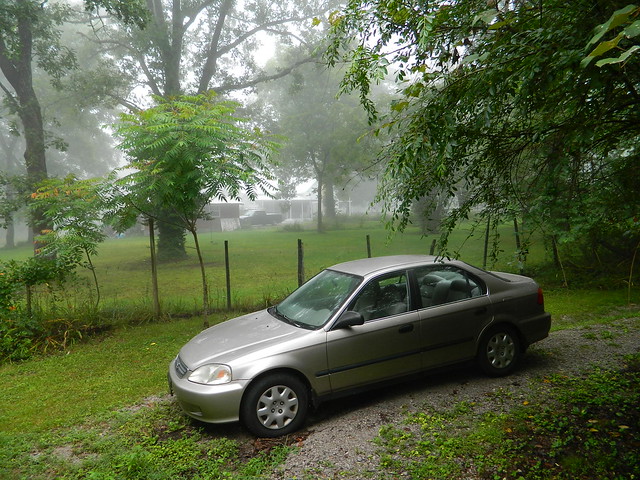 and turned to come back inside when I spied this: 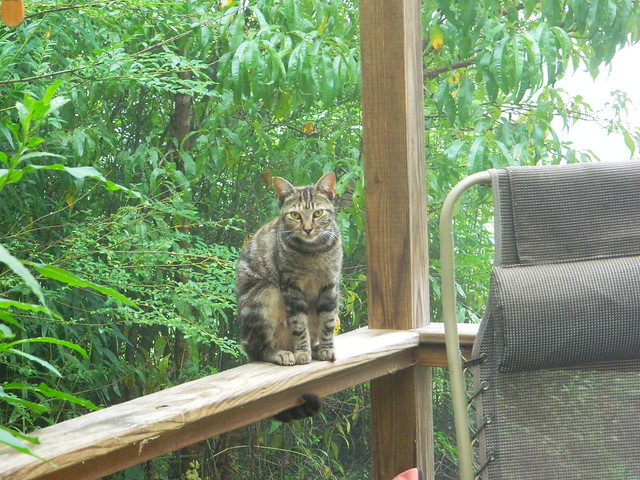 Katydids are getting louder and louder. I first noticed their rasping a week or so ago. Seems a bit early.

It’s already past 9 which is getting late for me now. Guess I’d better give Twinkle her food for the night and hope I don’t find it in puddles tomorrow morning.

2 Responses to Which Winter?