After I woke in a 62 degree bedroom, I got up and started my day. I didn’t get on the computer right away but when I did, there was a message from Cuz. Did I have some card paper? All she needed was two or three sheets. I got a couple of different kinds of heavy paper and took them over.

She was making business cards for spaces for the 127 Yard Sale (billed as the longest yard sale in the world and one of my biggest working years’ nightmares). I told her I have business card stock but she said she did, too, but it wasn’t working for the business cards. I had her send me the picture she was using and told her I’d get back to her.

After straightening the photo and cropping it, I fit it on the template. I’d thought I was cleaning the nozzles on the printer but it turns out I have to use what it’s physically connected to instead of my notebook. I cleaned the nozzles twice and printed three sheets to make sure everything was working the way it should. Then I printed the cards on regular paper three times. After that, I cut one of the prints down the middle and lined them up with the business cards Cuz had given me. It was acceptable. I printed two sheets of business cards and took them over.

Offering to pay me for my work, I asked her to fix me the “air conditioner” I’d shown her earlier. Needless to say, I’ll plug the fan into an outlet and not have the solar panel.

She thought she had a spare cooler and an elbow but she’d need a fan. I had the clip-on fan I’d used for years at work. I came over and got it. She said she’d work on it tomorrow and have my CIL bring it to me. WOOHOO! Now, I need to make a spot where I can put a couple gallon jugs of water in the freezer. That will be, probably, the most difficult part of the whole project.

Breakfast was a little later than usual and after that, I looked up and printed off a few coupons and ads for price matching. My supply of froot was getting low. 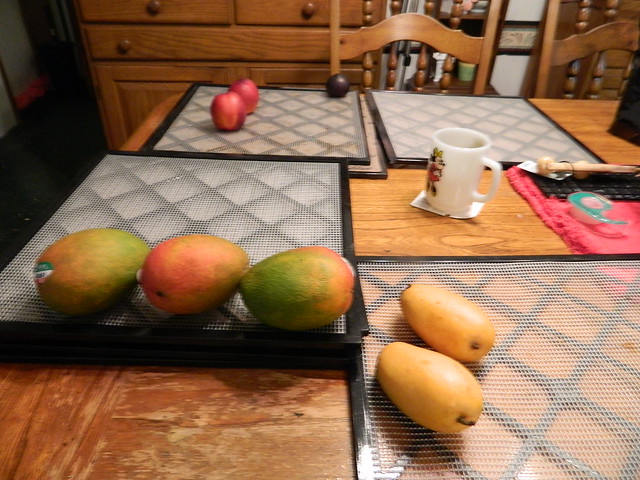 I took a shower, got dressed and headed for town. There were still enough packages of Dole Banana Dippers that I was able to get four without having to ask for the ones that are supposed to be put back for me. I’ll save those for insurance.

There were a lot of things to price match and when I got through and hauled everything home, here’s what the “after” looked like. 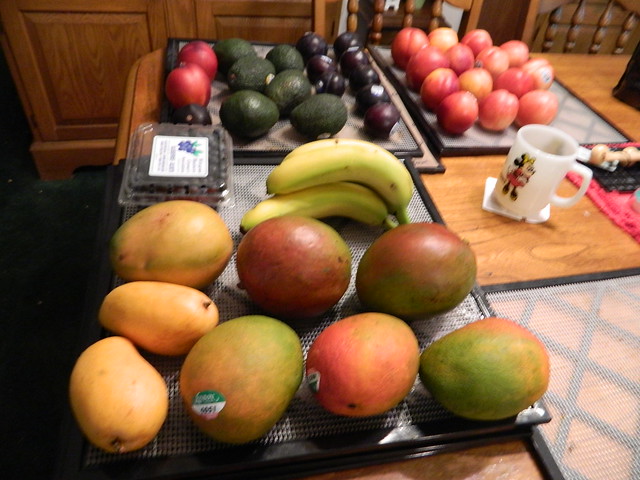 All the new stuff here except for three of the mangoes were price matched. The cherries (also price matched) didn’t make it into the picture. The little bowl has the rest of the cherries from last week and the others are from today. 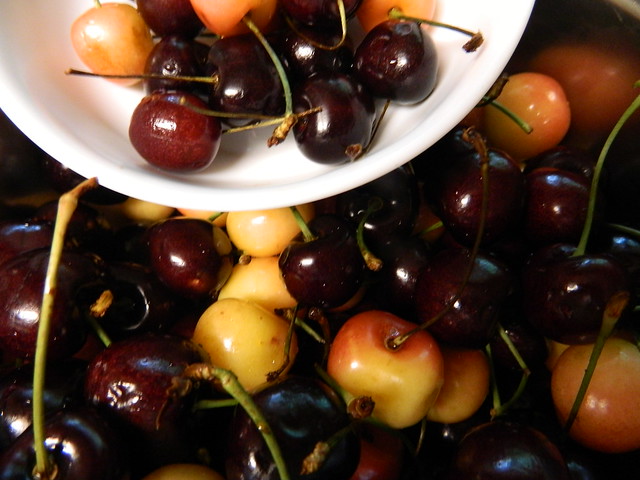 Quite a difference in size.

I also price matched a half gallon of Silk Dark Chocolate Almond Milk. A bit of homework pays off.

Cuz was outside so I went to visit a bit. She did find the key and had the things the Housesitter wanted.

I’ve been getting to bed earlier and earlier. Last night, it was a few minutes after 9. Twinkle’s still to feed. I turned her heating pad on today but she had no interest in lying on it. Fine with me. Turned off, it’s a lot cheaper.