It wasn’t planned but is it ever? I was in bed by 10 (part of my new “get to bed at a reasonable hour resolve). I didn’t go to sleep right away but lay and dozed a lot. When I did go to sleep, I woke in the middle of the night and was awake for I don’t know how long. I rarely look at the clock at a time like that because the light wakes my brain up even more and it’s harder to nod off again.

It was during the awake time in the middle of the night that I started thinking about my childhood and how lucky I was to grow up when I did. The kids these days don’t have it as good as I did. A lot of my summer days were spent playing with friends out in the fields with the cow pies and down by the creek where we saw water striders and frog eggs. After the eggs hatched there were polliwogs that wriggled around in the shallow water.

Mother, my sister next to me (may she rest in peace) and I lived some of my younger years at a self-supporting boarding school. There wasn’t a big variety of food but I remember someone donating a huge quantity of white bread to the kitchen. The president’s sister-in-law was in charge and she dried out all of the bread in the oven so it wouldn’t mold. That was stored in a large barrel and she turned her head the other way when we’d lean over the side and snag a piece or two.

Her name was Esther and since she was aunt to my friends, the rest of us called her “Aunt Esther”, too.

She was very resourceful and would make noodles from nothing but flour and water and then she’d cook them in a tasty broth she made from odds and ends. Once a week, she would empty the refrigerator of leftovers, mix them together and bake it into a casserole some of the kids from my sister’s age group dubbed “Lockerator Desolation”.

There was a cellar where canned goods were kept (the kind in jars, not tins) and five gallon buckets of sorghum. It was so cool down there and the sorghum was so thick, it took a lot of muscle to pull the ladle out of the dark rich syrup.

Lots of farms surrounded the school and someone brought over a truckload of watermelons. I loved watermelon more then than I do now and that’s saying a lot. The melons were piled in a spot where there were lots of huge rocks. One of the boys would grab one, burst it on the rocks and the closest and fastest kid would grab the heart and run. We’d eat watermelon until someone came and chased us away.

When fall came and the corn had been harvested, the field would be cleared of stalks and they’d be tied together in “shocks”. Those dotted the countryside and provided yet another diversion for us. Pretending to be Indians, we’d hollow out the shocks and make teepees. Sometimes there would be tiny ears of corn we’d shuck and eat, cob and all.

There was an apple orchard and we’d climb the trees and eat green apples in spite of being told they’d give us a belly ache.

We’d be out in the fresh air all day, only coming in to eat (when we hadn’t foraged enough on our own). It was a magical time and I didn’t know what riches I was experiencing until much later. Time took its toll. My friends moved away, other people took over and things changed.

When I did get to sleep, I had weird dreams. I dreamed there were four kittens I put in a bubble bath. They were swimming around, then sank to the bottom. One by one, I pulled them out, massaged their sides until they expelled the water from their lungs and they were fine. Night before last, I dreamed Genese had started a Wordscraper game.

I woke about 6:30 and took my thyroid med. I went back to bed, planning to sleep another hour, slept two and got up.

Here’s part of my breakfast. 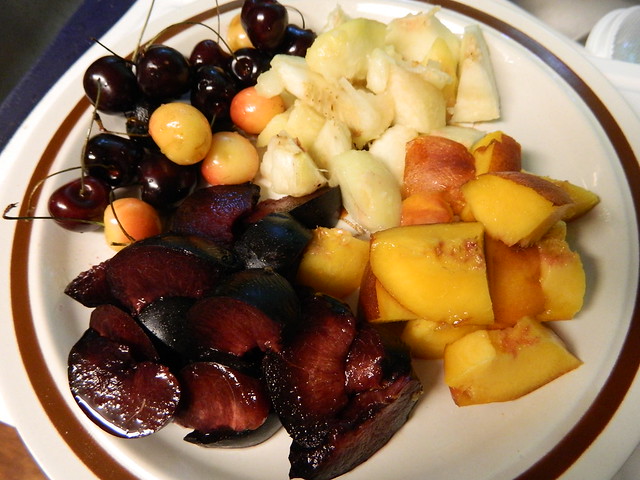 The white peach is the last of that variety. I had two left and one had rotted rather than ripen. The local peaches aren’t quite ready yet per their web site. Those will be the next I buy.

One of my friends from church called while I was in the kitchen feeding Twinkle. By the time I got to the phone, it had gone to voice mail. I called her back. She was at the university supermarket so I gave her a small order and told her I’d PayPal the money. She laughed even though that’s the way we do it now.

DD called me this afternoon just as I was getting ready to eat my artichoke. She couldn’t talk long since she was at work. Red tape required my Social Security number. I gave it to her and we talked for a little while. The coverage map for her cell phone shows she should get an excellent signal but she doesn’t. She’s ordered a different router to see if she can improve her Internet access.

I’m still updating the archives. It isn’t hard to do. It’s just making myself do it.