I kept my promise to Twinkle and called the Animal Hospital this morning. Yes, they had a case of Feline y/d and yes, they’d make sure it was still there when I swooped down the mountain to get it.

Adhering to my usual routine, I didn’t set out for town until around 2 p.m. TT. I’d had a shower and was dressed in jeans, a Tabasco Sauce T-shirt and my white MBTs. I was ready to cruise through Walmart.

Not so fast, though. Going down the mountain, I got behind a long line of cars following not only a log truck but a tomato truck, as well. Talk about my worst nightmare! The log truck pulled over and let part of the caravan by but not the tomato truck and not me, either. I’m thankful not to have that holdup very often.

First of all, though, I stopped to fill the gas tank on my little Honda. The light had started coming on when I was heading home from church and I don’t like to let it get too low. It’s been a lifetime since I ran out of gas and I hope to keep it that way.

The tank held 10.01 gallons which made it very easy to figure my mileage. The trip meter showed 330 miles and a fraction so I’m getting 33 mpg even with having to run the a/c whenever I’m out and about. We won’t talk about how much I spent. I’ll just say I’m helping to pay for the station’s improvements.

The used food store is right behind the station so I went there to see if they had the toilet tissue I wanted. Sure enough, they have that brand but it’s one ply. I was game to try it but when I got to the register, I was told they don’t take coupons. That was a game-changer. I put my coupon back in my organizer and left the tissue at the register.

On to Walmart. I’d done my homework yesterday and this morning. I was armed with printouts and more coupons. I can’t keep a good thing to myself so when I saw a woman looking at the nectarines, I told her Save A Lot has nectarines, plums and peaches for 99 cents a lub. We started talking about price match, coupons and saving money. Publix had cherries for $1.99 a lub so I stocked up on them, too.

Saving the frozen food for last, I went to get the Dole Banana Dippers I’d been promised. There was one package on the shelf. I finally located one other one. I went hunting for someone to help me. Finding a produce guy, I asked if anyone was working frozen food. Well, he was. What did I need? I explained that I was looking for Banana Dippers and there were only two packages. He went to the back and when he came out, he said inventory only showed one and I had two. Explaining about the order and how there was supposed to be a case, he said he’d tell the man I’d talked to and they’d order another one. This time, I could get what I wanted before it was put out to sell. I hope.

I hadn’t tried the Strawberry Dippers because one of my friends told me they were only too nasty. There were several packages of them so it’s a settled fact people don’t like them as much. I decided I’d use a coupon and get one package and form my own opinion.

I still had to go buy Twinkle food. It had rained while I was inside but it didn’t last long enough for me to get wet. The parking lot at the Animal Hospital was full so I figured it would take some time.

The waiting room wasn’t bad. Humans must’ve been in the exam rooms with the animals.

Getting to the window, I told the woman I was there for “the usual”. I also asked for a coupon or two. She had someone get the food from the back while she rooted around in a drawer and came up with a coupon for $5 off. Every little bit helps. The girl who’d taken Twinkle’s picture asked if I’d gotten it. When I said no, she said, “Stupid email!” I don’t think she knows how to send it.

Since I am the Feeder again, I pulled up to my cousin’s house and took care of the critters. It had rained some here, too. I had to dump rainwater out of the Catz’ pan.

Putting the Banana Dippers in the freezer, I came on home and unloaded.

Laying out my fruit (I got all of this today except for the larger mango), I couldn’t resist taking a picture. 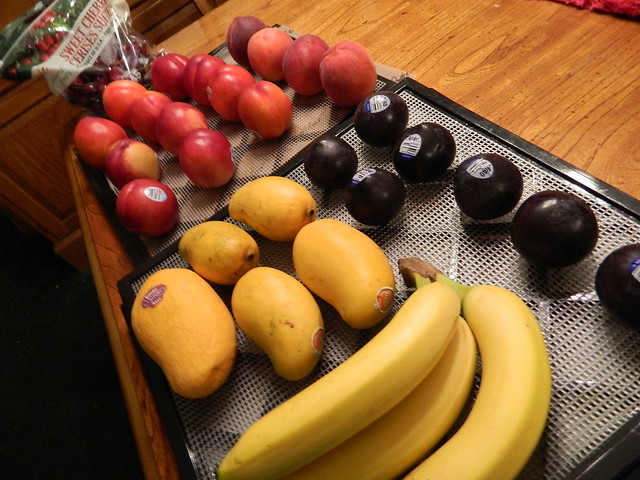 I still had blueberries from ALDI so I had a fruit salad of blueberries, plums and cherries. The price for the nectarines, peaches and plums is good for another five days or so. I may use that printout again.

The Strawberry Dippers aren’t nearly as good as the Banana Dippers. I’ve tried them now and I won’t be buying any more.

It’s hard to type because my fingernails are getting so long. I’ll have to remedy that soon.

Twinkle is down for the night. When I was in the kitchen, I thought I heard rain. The woods muffles the sound so I went to the front door and, sure enough, it was raining. That means it will be a good night for sleeping.