Everyone who has ever been acquainted with a cat or has been on Facebook knows that felines like boxes. I like making life interesting for Twinkle so I first put out a large box for her.

As time went on, I added to the collection until there are, currently, five boxes of different sizes. She hardly knows which way to turn but I found her in one this morning and she stayed still long enough for me to get a picture. 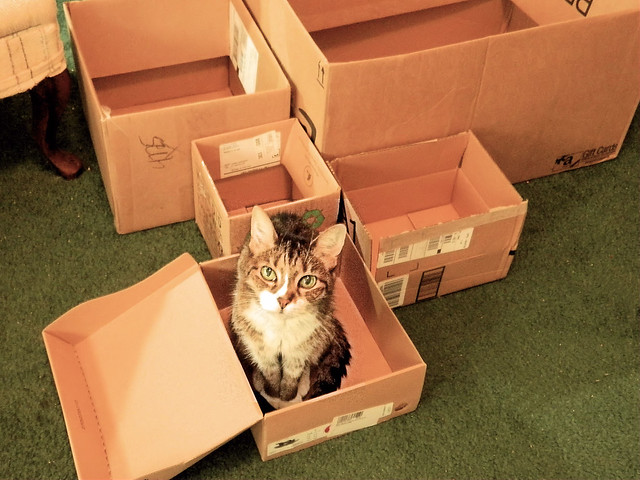 And that’s been the highlight of my day.

It’s been notter today and quite sticky. I couldn’t talk myself into exercising.

Someone had emailed the editor that the navigation for the helps files was all wrong. I’d fixed them on the ones I had on my computer when I remembered the editor was supposed to be adding titles and tags. After my hard work, I had to download the most recent files and do them all again. Job security.

Turns out the templates were wrong. I hadn’t had anything to do with them for the current quarter since there was some “tweaking”. The tweaking done, I’ll take over for Q4 and update the templates. Then, if something is wrong, it will be my fault.

I didn’t feed the critters until about 4 o’clock. After I’d walked to the mailbox and back to the house, I had a “cough until the toenails come up” episode. I hate that.

Genese updated me on her CT.

scan was done yesterday.. Dr will get the report next week.i am paying for it. i have a bruise in my bottom now that will be watched in case it becomes a dq. joy joyjoy..

The dq must mean decubitus ulcer. That’s all I can figure out.

My sister emailed tonight that a plaque is to be created that will include my in-laws and their dates of death. I easily found my mother-in-law’s information but I called on my academy roommate to help me with my father-in-law. She came through and it was interesting to see that he died 13 months to the day after his Doll did. I well remember his passing. I’d sat with him after I got off work. When I came home to eat a bite, I got the call to go back. When I got there, he was gone. That was September 3, 2000.

It was ‘way too late when I went to bed last night but it takes a while for the house to cool off after a hot day. Since it was 84 in here earlier, it will take longer tonight.

Twinkle has been nuzzling my toes. Guess she wants some food. Not me. I’m good until tomorrow.