Last night, after I finished my blog post, I checked Facebook “one last time” before heading to bed. That’s when I saw there was activity on Wordscraper. I got all excited. Genese had played! Woohoo!! Wordscraper wasn’t dead, after all.

Clicking on the link, it took me here:

How could I win when Genese all but had the game in the bag? She was over 3k points ahead of me. That doesn’t sound like my winning.

This morning, I looked into it. The board puzzled me. It said the same thing. 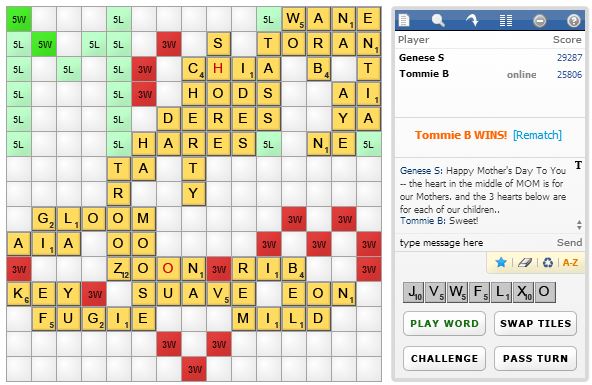 The graph didn’t help. My green line was much lower than her blue one. 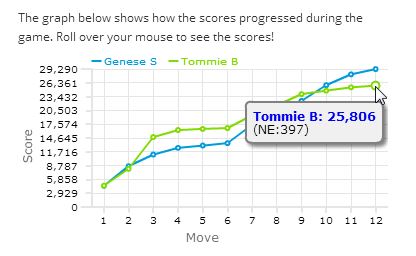 I was going to email Support but I decided I’d look at the FAQs first. I got my answer:

If less than 4 moves have been played, the game will instead be deleted.

Hence, the nudge and force win options are no longer required. Also, remember that your opponent will get a reminder to play their turn 2 days in advance.

We understand that the 2 weeks period might not suit all players, but we can’t have multiple options for this and this time period was chosen based on a general consensus.

So, now I have a win in my stats that really isn’t a win. There’s another game that Genese hasn’t played for 11 days. On day 13, I think I’ll delete it—or concede so it will make the “winnin'” even. Wordscraper is dead. Long live Wordscraper.

Twinkle was down to a little over a can of food so I called the Animal Hospital yesterday afternoon. Yes, they had a case in stock.

Walmart and the AH were my destinations today. I wore slacks and a top with 3/4 length sleeves because it was still chilly out here on the mountain. That wasn’t true for town, though. A sad thing was that there was no coupon available for Twinkle’s food.

Back home, I pulled into the driveway and opened the garage door. I needed to put some things in the freezer. The kittens were on top of the little box/house my cousin had set up for them and loudly squeaking. They sound more like birds than kittens. The gray one’s eyes were glued shut again so I found a washcloth and took care of them.

With everyone fed, I came on home and unloaded. I’ve been so sleepy, I wasn’t able to hold my eyes open after I ate so I napped a bit.

Twinkle is looking for food. If she’s going to eat so durn much, she could at least put on some weight.

2 Responses to Winning When I Didn’t