Several years ago, I left the Dyson in my bathroom. It was sitting in front of the shower when I went to bed. I knew it was there and avoided it but, in the night, it was a different matter. I went bustin’ in to use the pot and totally forgot about the vacuum. Not having anything on my feet made my little toe on my left foot especially vulnerable. For some weeks after that, I wore the evidence gathered from running into the Dyson with my little piggy that cried all the way back to bed.

I’ve gotten in the habit of wearing backless sandals (aka “mules”) on my trips to and from. They sit beside my bed and it’s very easy to slide my feet into them. Just last night, one of them hit the Dr. Heater that is now a stand for a fan. I was thankful it was the sandal and not my toe.

There’s another reason wearing shoes is a good idea. Twinkle. She is a cat and cats are known to upchuck in the most inconvenient places. When I do, I head for the bathroom and bow myself over the commode. You’d think she had the decency to lose her lunch or assorted hairballs in the litter box but NO! After all the sound effects and posturing, it can be right where I plan to walk. It took one time of stepping in it to cure me of going barefoot.

Yesterday was pretty much hairball-free. I’d had great plans for what I was going to get done. Not having to spot-clean the carpet leaves that time for other things. I was going to do laundry, exercise, make tapioca pudding—I had quite a mental list.

I saw a white truck over at my cousin’s house. Naturally, I thought SOMEONE was home. I didn’t notice anyone go into the house, though, so I called my cousin and got voice mail. “Did my CIL feed the critters while he was home?” She called me. The truck wasn’t my CIL’s. It belonged to her construction partner and he was just picking up some things. I told her I’d feed the livestock.

When I went inside, it felt like the a/c had been on. I started coughing. Why, I don’t know. All I know is, I coughed and coughed the whole time I was in there plus when I was feeding the Catz. I coughed until I almost threw up. Back home, I was so worn out from coughing, I couldn’t do any of the things I’d planned. My energy had been zapped. Zonked. Gone.

It was a relief I didn’t have to go play for church today. I slept until I woke up with the sun shining on my face.

Sliding into my sandals, I came to the living room where I found Twinkle’s first offering—a hairball. Then there was another, just a few feet away. The carpet got a spot cleaning even though it was Sabbath. I was thankful for SHOES.

One of the first things I do in the morning is open the front door so a cross current of air will help keep the house cool. (Did I say “cool”? It’s 82 in here now at almost 10 p.m. TT.) Here’s what I saw. 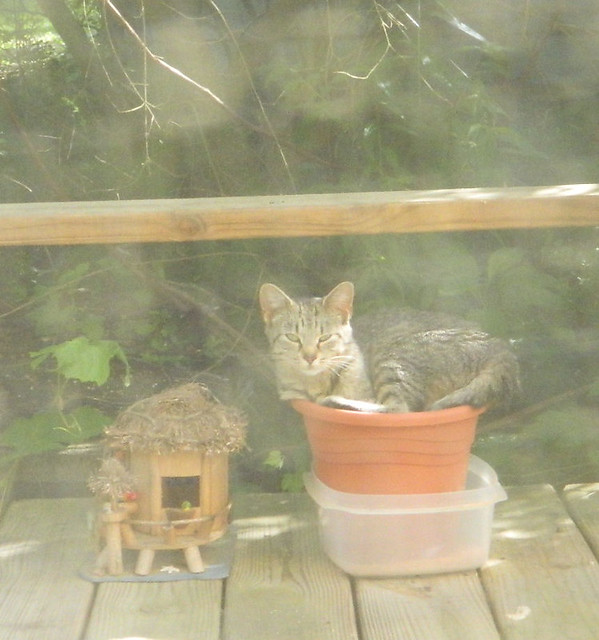 The first picture was through the screen. I didn’t know if she would stay where she was if I opened the storm door but she did. 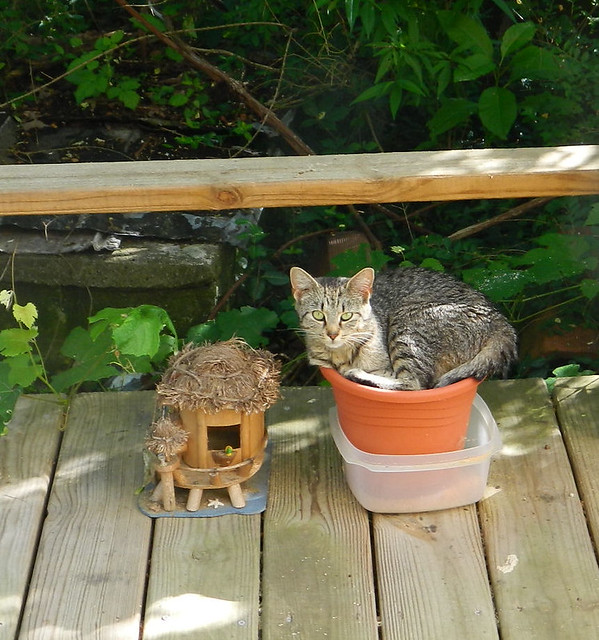 I thought she might move when Twinkle discovered her but she just looked around a laid her ears back a bit. 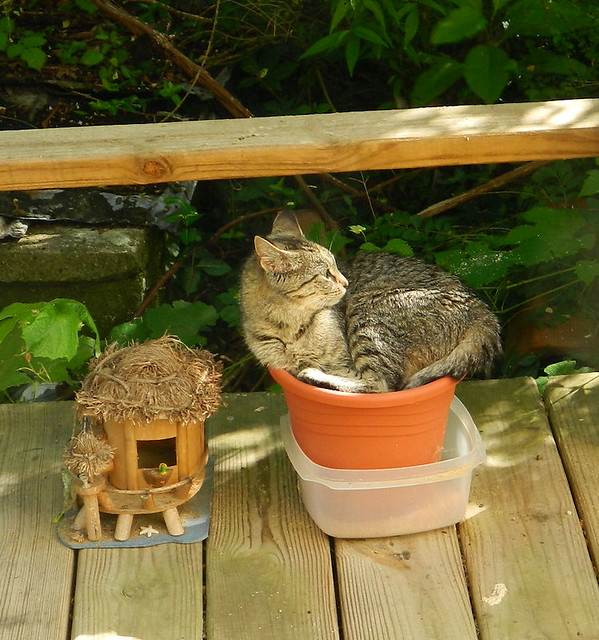 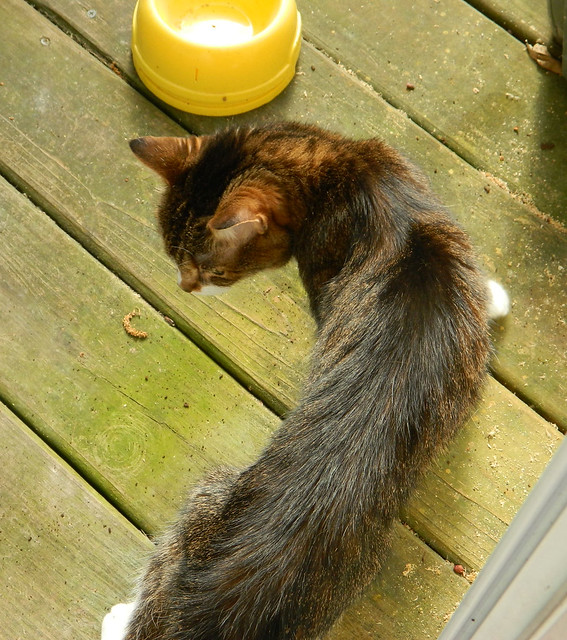 The Cat didn’t seem to care even though Twinkle hissed and screeched a time or two before she came back in the house. 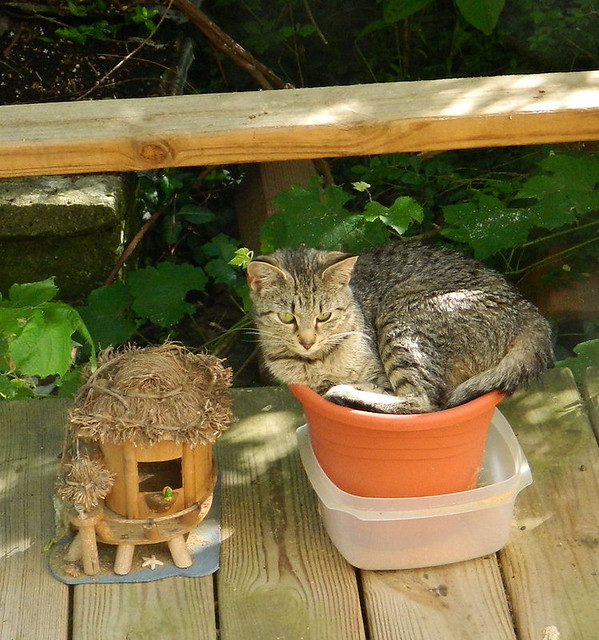 I haven’t hung the hummingbird feeders. I don’t need Catz targeting them.

On a whim, a few days ago I’d emailed the CEO of the company that provided the hospital system before the Mother Ship took over the operation. When I checked my email, I had a reply from him. I’d given up on getting a return message because the company had been bought out but there it was! He and his staff are a good bunch of people and I’ll always remember the time we had together with gratitude.

The rest of the day has been quiet. My cousin (or somebody) was at the house so I figured the critters had been fed. I didn’t go out and whoever was there didn’t come over.

Guess I might as well face the fact I don’t have a Wordscraper opponent any more. It’s been a week on one game and 12 days on the other since I played a word. All things must come to an end. I won’t delete the boards but I don’t know how long they’ll stay there before The Powers That Be do away with them.

My netbook has Genese’s area on Weatherbug and my notebook has mine. My netbook “chirped” an alert but my notebook hasn’t. There’s a severe thunderstorm warning for there but not for here but the rain is coming down hard and the wind is blowing. I just heard some thunder so maybe her area is sharing with mine.