It’s bittersweet. Today, I emailed the representative from the nominating committee and said I won’t be accepting the position as organist for the next fiscal year. That means I’ll be playing five more Sabbaths—four if the church closes the Sabbath of the Olde Time Campmeeting.

I’ve played the organ every Sabbath I was at my church with few exceptions. I haven’t been absent very often. It’s going to feel strange not to have that responsibility week after week after week. For some time, I haven’t been happy playing. It’s become more of a burden than a blessing so after praying about it, I’ve come to the realization that it’s best if I step down.

That organ has been part of my life ever since DH bought it for me so long ago. It’s like saying good-bye to a family member. Playing for one’s own amazement is much different than the structured playing for a church service. I’m hoping I can keep my key to the church and go in to play occasionally for the sheer pleasure of it. If I’m asked to turn in my key, so be it.

It’s been a crazy day for weather. DS1 would say it’s a summer weather pattern. When I looked out this morning, the sun was shining brightly. The weather clock in my bathroom showed rain. Surely not! But, yes. Off and on all day it has rained. Periodically, there would be thunder and lightning and then there would be a shower without it.

During one sunny period, I looked out my bathroom window and the sun was glinting off the raindrops on the leaves. I took some pictures but I think the screen blocks the sparkles. 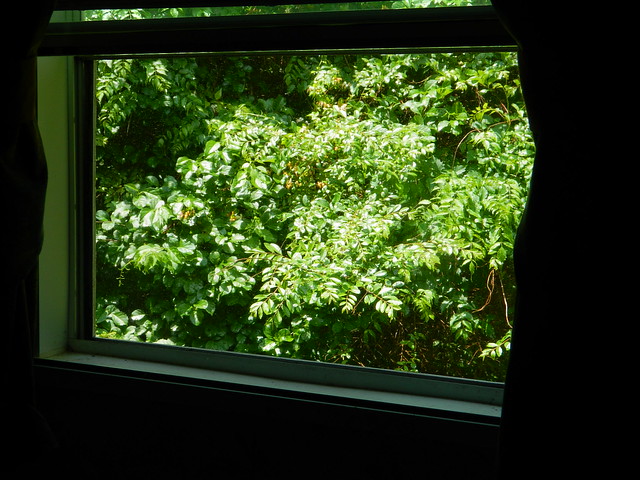 Before I started exercising, I looked out to see what the weather was doing and saw my cousin and her construction partner going to the van. I knew the Catz hadn’t been camping out on the deck this afternoon and it’s because they got fed. One of them has put a wee hole in the screen over in the bottom corner. I don’t want to have to keep the door closed but it may come to that.

Well, for supper, I had the last of my broccoli with more of the hollandaise. Rocky from The Vegg left me a comment on yesterday’s post and said the mixture should last up to a week in the fridge. I was sure it would but it was nice to have verification from The Man, himself.

Twinkle has been fed three times today. I’m going to feed her for the fourth and then declare bankruptcy.

2 Responses to I Have Decided