I slept warm enough but when I saw it was 62 degrees in my bathroom, I plugged the waterbed heater back in. I managed without the Dr. Heater until it was obvious the temperature outside was dropping. That’s when the windows were closed and the heater turned on. Currently, it’s 46. No, not in the house. Outside.

My sister sent me an email this morning. She and my other sister (the owner of the notebook) had read on my blog that I’d advised them to leave it online last night so it could update. That was news to them because the email had yet to get there. She uses Juno and it seems to be about as slow as snail mail (if it gets there at all) and she pays for it. I’d be upset if I got that kind of service from FREE email, let alone something I had on subscription. She seems rather unperturbed about it. I guess if it doesn’t bother her she isn’t getting my emails it shouldn’t bother me. On the plus side, she isn’t getting as much spam.

I’d kept my robe on over my sweats for warmth until I made myself go to feed the critters. Imagine my surprise to find they’d already been fed! I never know any more if I’m supposed to feed them. Mixed messages is what I get. 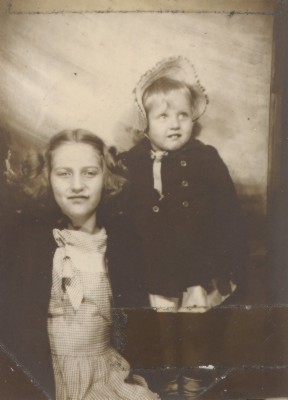 Facebook’s Throwback Thursday is something I haven’t been participating in regularly but I did today. I posted a picture of my sister and me. She is the one who lived in the Great Northwest until she passed away ‘way too soon. I think we were at a carnival when this and three more pictures were taken. All told, there were two pictures of us and two of my father and me. I was probably three years old and I appear to be wearing jodhpurs. That’s a strange word. They were kind of the rage then, though. I don’t know if those were riding boots or not. I do know I had been scared senseless by a horse (now you know) and didn’t want to be near them. However, I still had the dream of owning one. I guess I’ve always been a mass of contradictions.

The cool/cold weather has called for some warm food and drink. I’ve had two cups of hot chocolate today and a big bowl of Mother’s vegetable soup. Well, it was sort of Mother’s vegetable soup. I don’t think she ever put celery in hers but I like it in mine. I used brown rice pasta (which she would have never heard of) and she used regular old macaroni. It was nice, though, and felt good going down. I think it all kind of riled up my acid reflux but a couple of pieces of toast settled things nicely.

Besides my great-niece’s graduation invitation, I’ve received a wedding invite for me plus one. With my current financial situation, people are going to have to be satisfied with cards and my best wishes for all their future endeavors. I checked Humana’s web site and the emergency room co-pay has been adjusted off. However, it still shows I owe the $269.25 I’ve appealed and the inpatient co-pay for the hospital which I owe. I haven’t gotten a bill for either one so, until I do, I’m laying low.

Twinkle got on my lap for a bit today but I think her heating pad is warmer because she didn’t stay long. She’s eaten more—maybe to keep her internal furnace going.

It’s been two days since I played my last word on either Wordscraper board. Either Genese isn’t feeling good or she’s gone on strike.

Living In the Past
Oops! I Did It Again!