And that sounds like the finale to a classic TV show. I know people probably get tired of my writing about my awesome appliances but it doesn’t take much to get me excited. That’s where we’re starting tonight.

The dishwasher is proving to be everything I’d hoped it would be. I trust this doesn’t mean it will suddenly go belly up. It’s very easy to organize things and I was bowled over in the beginning with the silverware caddy. I was chucking things in, left and right, and then having to sort them as I put them away. WHY?? I hadn’t really backed up and thought about it. Then I realized it would be much easier to sort them into groups as I put them in and here’s what it looks like now: 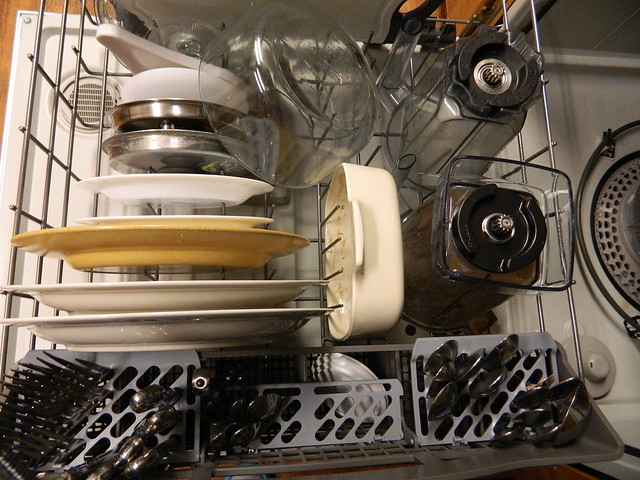 When I put the “silver” away, all the pieces that are the same can be grabbed at one time and put in the drawer. I think. I walk upright and I have opposable thumbs.

There’s a lot I don’t know, though, and I’m still learning about the camera I bought three years ago. I was snapping away, taking pictures. When I opened the camera to take out the memory card and put it in my computer, it wasn’t there! Thinking that was strange (the camera hadn’t alerted me that there was no card), I closed it up again and snapped another picture. 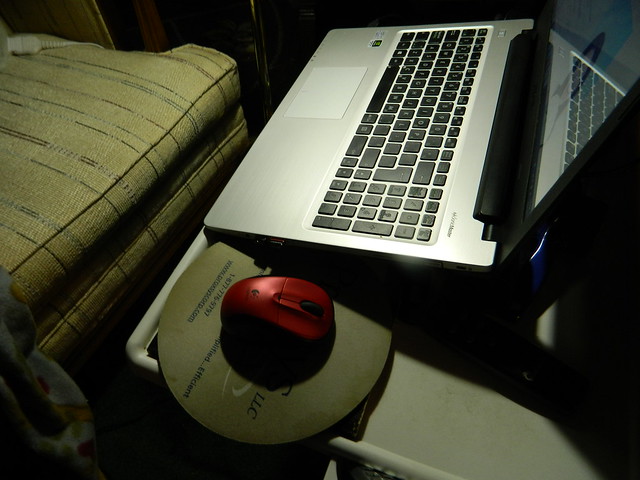 Then I put the memory card in and took some more pictures.

I set out to find out what was going on. I downloaded the manual for the camera (sure, it came with one but give me a searchable pdf any day). Sure enough, my camera has an internal memory I didn’t know about. How big is it? I have no idea. It’s there, though, and I found out how to copy the pictures from it to the memory card. You can do the same in the opposite direction so it must not be too small.

Yesterday, I’d planned to stay at home. I figured I’d go to town on Monday but I started looking at grocery ads. Publix had almond milk, two half gallons for $5. It’s something like $3.28 each at Walmart. Then I got a couple of coupons each for $1 off which would bring the price down to $1.50 a half gallon. The sale only went through today so if I wanted to take advantage of it, I had to go. Right then.

On my way into the store, I saw four of my friends before I got inside. While I was wiping down my cart, I saw a couple I know. Then one of the ladies from the prayer breakfast came by—and she told another friend inside that I was out there. SHE came out and we talked on the way to the produce department.

I did my couponing and price matching (when I was telling her about that, she protested she never got to the other stores but neither do I). Then she started telling me about something she’d heard on the news about if a coupon is used and the customer gets sick, the company isn’t liable or some such. After searching for several minutes (which equals a LONG TIME on the WWW), I found this. Thanks, anyway. I’ll use coupons. Besides, a half dozen of them weren’t for food.

Exactly how much I saved with price match, I don’t know–it was probably a couple of dollars. I know I saved $11.50 with coupons. Not a whole lot and by extreme standards, a mere drop in the bucket but it was a decent amount.

My cousin had gotten home not long before I left and when I got back, it was evident she’d been busy. The weeds had been taken down to a manageable height. She came over and I offered to give her computer back but she said tomorrow would be fine. She said she’d help me bring the groceries in but I could manage.

Sure I’d make it to the church in time to practice a bit, I was deflated to see cars already there. Sure enough, the alternate pianist was at the piano when I walked in. No one showed up to lead song service so we played for about half an hour until the superintendent got there.

However, it did work out okay. A couple has been coming for several weeks and he delights in picking obscure hymns that no one knows. I think it might have been disappointing for him to find I could play “If You But Trust In God to Guide You”.

What he didn’t know is that was the first song assigned to me when I was taking organ lessons back in academy.

Anyway, during the second song service, the song leader picked all the songs so he didn’t have his chance once again. Maybe that means he’ll double up next week.

A couple of the key members were missing—the Cavalry and his wife. Her mother has been ill for a long time and today was the day she began the long sleep that will seem but a moment. My DIL posted a link to a video on Facebook that is so appropriate.

The church was cold at first. The deacon had told the greeter the heat pump must need a part or something. When the elder got there, I asked him and he went in and turned it from “cool” to “heat”. I hadn’t taken my coat but I surely wished I had.

When I was leaving the church, the deacon said, “Going up the mountain?” I laughed and started telling him about the time someone told my father he was like a squirrel—he went to the valley to buy his groceries and then took them to the mountain to eat them. I didn’t realize I was asking for a rant. He went on and on about how there’s no difference between living on the mountain or in the valley. Well, I beg to differ but it didn’t do any good to disagree. It’s all the same. It’s all Tennessee. Well, yes, but the mountain doesn’t flood and it’s 8-10 degrees cooler in the summer. Doesn’t matter. You have to run the air conditioner, anyway.

Which brings me to something else (don’t you love the way my mind works??). With all the expense I’ve had lately, there won’t be anything left for me to get the duct work thoroughly cleaned. I would have liked to have it replaced but that surely isn’t an option now. I saw this on Facebook and it looks like a viable way to keep cool.

Not beautiful, but neither are the sheets I have over the registers all around the house.

Well, it’s getting to be later than I’d wanted to be up so I’m going to quit this. I still need to feed Twinkle and take my last NAC for the day.

The Guard
The Hunted

2 Responses to I Got Smart