That round tuit has been very elusive but I found it and decided I’d use it for a bath. That was yesterday. It was most satisfying. The Cavalry had asked me to keep him posted so I updated my status on Facebook. “I took a bath. The tub was full. I turned the water off. It was still hot. WOOHOO!! — 🙂 feeling happy.” His wife is one of my FB friends and he got the message. She said he said (sounds like something that would be inadmissible in court), “praise the Lord for that!” And I have!

I’d gone over to my cousin’s and noted the Catz were low on food. I gave them the rest of what was there and fed the babies. I checked my cousin’s new computer. Something bad has taken it over. I ran MalwareBytes and it came up with a list of over 400 PUPs. I cleared them off but there are still problems. It used to be a person could download a program and get just that—A program. Now, you have to be very careful and read each screen. Otherwise, all sorts of stuff will install itself on the system and make the situation serious enough the only thing to do is wipe the slate clean and start over. That’s what happened to the Computer Owner’s laptop.

My late nights caught up to me and I was in bed by 9:30 last night. I’d set the timer for nine hours and fifteen minutes. When it went off this morning, I really didn’t want to get up but I did.

There were 6.5 avocados in the fridge that had been looking at me for days. Well, the half one was from the one I cut yesterday but the other six were saying, “You know, some mousse would be nice.” Fellowship meal was today but I didn’t plan to stay. I hadn’t fixed anything yesterday and a batch of mousse wouldn’t go very far. I decided I’d whip some up and take part of it to Genese.

It didn’t take long at all but I’d still run out of time. I’d wanted to get to the church early enough to practice and I did get there somewhat early but the pianist was already there. I’m beginning to think she sleeps at the church on Friday night.

I wore my remote today and didn’t care if people thought I was playing with something I shouldn’t. The ePen is handy but not as versatile. I could hear just about everything except during song service when I have to turn it down to keep from being deafened by the piano.

It was warm in the church and I could tell the Cavalry was uncomfortable. After a while, a stench filled the sanctuary. At first, I thought it was me but I hadn’t done anything to cause it. After I sniffed around and smelled my clothes, I figured I was safe. Then, when I went to the bathroom, I could tell the a/c had switched on. That must have been the source of the bad smell. It eventually went away.

After the service, the Computer Owner came up and said we needed to get together soon. I told her it couldn’t be tomorrow but how about Monday? She said she could probably be here after work. We left it Monday unless something comes up. In the meantime, her computer is purring right along.

I gave the wife/mother of a new family a package of kelp noodles to try and told her I’d send her the link for my page. I told her I was going to see Genese rather than stay for the meal. Heading for the nursing home, I parked and stopped in the cafeteria to transfer the mousse from my container to a styrofoam bowl. I saw several people I knew but didn’t pay any attention to the birthday celebration going on in the back corner.

Genese was lying down with her eyes closed and I thought, at first, she was asleep. Turns out she was on the phone with her daughter, Kimberly. The birthday celebration was for her sister.

We had a good visit for more than two hours. During that time, her mother and aunt came in with a piece of birthday cake. She prevailed upon me to take a bite so I wasn’t truly vegan today. The icing had caramelized Eagle Brand as an ingredient and I’m sure the cake had eggs. It was good but I like my mousse better.

Genese’s leg has started soaking up fluid again. The remedies for it are few and far between. She has mentioned amputation but “our” doc doesn’t see that as an option since she is diabetic and healing would be an issue. In a very short period of time, she’s gained something like 16 lubs and all of it because of that.

She did mention something that made me overjoyed once again that I’m retired. Joint Commission has been there. That was the bain of my existence when I was working. My department wasn’t involved a lot but we had to prepare along with the other areas. I was pretty much kept out of the way of the inspectors after I didn’t put the proper “spin” on one of my answers. I don’t know how it’s going with my predecessor. She tends to speak the truth as she sees it, too. Of course, she could have been educated since I left.

During the visit, Genese was nibbling on the mousse. One of the men from environmental services came in and said he didn’t see me around much any more. I told him I was retired but I sneak in to see Genese every now and then. 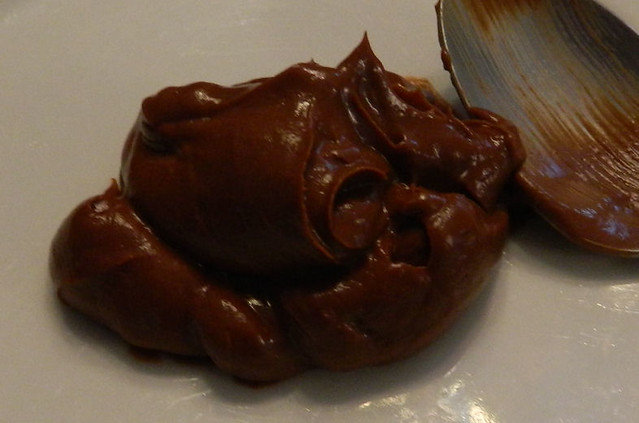 That mousse was making me hungry. I came on home and have eaten too much. Guess that comes from not eating enough breakfast and going too long without food.

Twinkle needs to be fed and I need to hit the hay. Tomorrow is promising to be busy.

2 Responses to Of Tub Baths and Chocolate Mousse