My sister decided a road trip was in order so she could see what she thought about a notebook/laptop vs a desktop. She called me this morning so I could walk her through setting up her PayPal account for if/when she gets something to replace her in-computer-years ancient system.

The system was being very slow (as can be expected with 1 GB of RAM and not all of it usable) so I got the info from her and signed her up myself.

That done, I started in on washing the towels used in mopping up yesterday. I had to call my cousin to find out where two of them were. They’d been thrown on the ground behind the house. I went out and got them. They are both like terrycloth blankets and when they’re wet, they’re very heavy. Not only that, they were covered with dead and decaying vegetation.

Pushing and shoving, I got the washer back into place and loaded it. There were other towels plus a bathmat from the same set I put in with the ones from the ground. Since they were pretty gross, I added some Solumel along with the detergent. Setting it for “heavy duty”, I left it to do its thing.

Then I started in on the clothes I’d cleared out of the utility room. I sorted, folded and filled two Walmart-type bags with stuff to take to Goodwill. A lot of it came from there so I guess I could say I’m returning it.

With that out of the way, I explored the closet and, I’m relieved to be able to say, there is no evidence of water seeping under the wall. I need to do a lot more sorting and getting-rid-of-surplus but that’s for another day.

My sister had made it to our other sister’s house by then and she feels the other sister isn’t altogether comfortable with the notebook. She thinks she’d be happier with a desktop. Beats me why but she’s the one that has to use it, not me. It was quite amazing that she’d checked and PayPal had already verified her bank account rather than taking the two to three days predicted.

I got back to my projects. One of the towels came clean, no problem, but the white one had a lot of rust stains that didn’t come out. Rather than set them worse by drying it, I washed it again adding bleach. It still had a lot of orangey spots. It went through another cycle with little change. So…I washed it again with another towel using detergent and OxyClean.

Leaving that part of the house, I was engrossed in something else when I heard a chirping noise. I followed it to the utility room and found that it was the washer. It had “walked” at least four inches forward and the towels were all bunched on one side of the tub. I think this is the second time it’s ever gotten out of balance since I’ve had it. I redistributed the towels and started it up again. There were still some spots but I gave up. Those towels are so think, I really don’t like them. I plan to keep the washcloths, hand towels and bathmats and give the towels away. I just hate to give one that’s stained but I was warned that it would happen.

While I was in there, I glanced out the window and here’s what I saw: 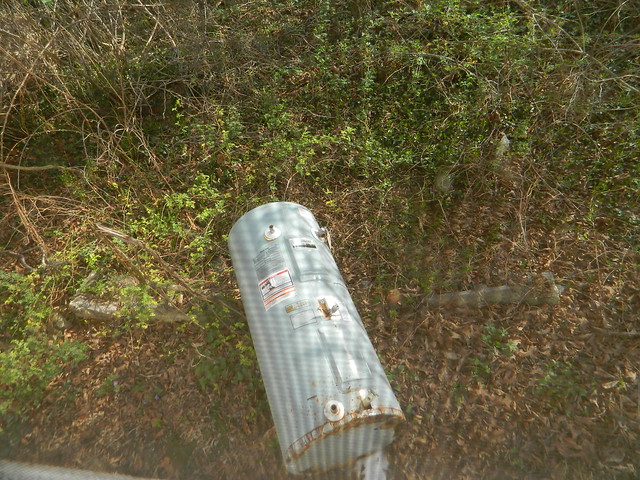 Back in my Mother Earth News day, people were taking old water heaters and making them into woodburning stoves. I wonder if they still do that? Anyone need one to convert?

DD posted on Facebook that she’s planning to get rid of her PC and replace it with something current. It’s a desktop so I figured it would be perfect for my sister. DD said it’s big, heavy, clunky and slow. However, most desktops are big, heavy and clunky and, without PhotoShop and Dreamweaver, it would probably run a whole lot faster. I asked her to send me the specs and she said she would the next time she gets into it.

The Computer Owner called me this evening and I was trying to walk her through getting into safe mode. She tried multiple times with no luck. We were getting nowhere so I told her to drop the computer off on her way to work and I’ll see what I can do to fix the problem. She told me to get my beauty sleep so here I am, blogging.

My sister remarked this morning that Twinkle is skinny. Yes, she is. I guess the picture I posted day before yesterday shows just how thin she is. She’s never been a fat cat and, believe it or not, she’s gained weight since DD was here in December.

Besides all the towel-washing today, I washed a big load of clothes. It’s been warm enough that I’ve been garbed in shorts and a t-shirt. I don’t think it’s quite time to pack the winter stuff away but you never can tell.

In Hot Water
Another Warm One