Today was April Fool’s Day. If you reckon time by midnight to midnight, I guess it still is. If you use Biblical time (even to even—sundown to sundown), it’s over. Be that as it may, I didn’t April Fool anybody. In years past, I’ve been the author of some doozies but not this year.

DS1 posted a picture on Google+ of what he found around 5 o’clock this morning (which is no doubt 4 o’clock Tommie Time). This takes POSTING to a new level. 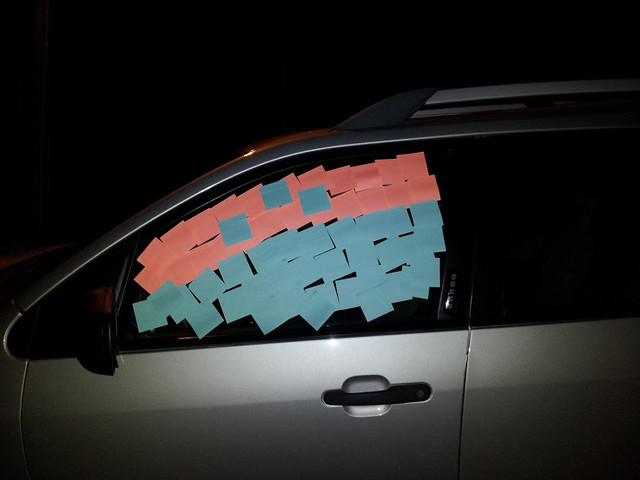 He said Someone either got up very early or stayed up late to do it. It was equal opportunity post-its. Both sides got the same treatment.

Not only did I not pull a prank, I didn’t GET pranked. Frankly, I didn’t think about it a whole lot either way.

I’d used the last two bananas in my morning smoothie. Besides that, I needed some other things from town. I’d called in my prescriptions last night and they were to be ready after noon EDT today.

Before I left, I finished Lesson 5 and uploaded it.

My cousin had told me the Cavalry would be coming by to install the water heater this evening. Okay. I’d go to town, make quick work of it and get back home before he got here.

On the way, I stopped at the Hearing Center and picked up another pair of stems and domes. I’d found some extras but I like to have a couple of sets on hand, anyway. My aids had gotten so they were miserable to wear and I discovered, quite by accident, that the stems had gotten out of whack and were causing the discomfort. That won’t happen again.

It was such a nice day, I topped off my faithful little car’s tank. I’m still getting 37 mpg down and up the mountain.

Walmart is on my List once again. They’ve quit carrying my So Delicious coconut ice cream! I haven’t taken time to communicate my distress but I will. I had a good visit with “my” produce guy. He agreed there is no rhyme or reason to what The Powers That Be do. Something will be selling exceptionally well and it will be pulled, no explanation. I complained to the frozen food guy. He said he’d ask the next time the ice cream guy came in. I hope he doesn’t forget.

The Aldi special on avocados ran through today so I used it again for price match and got the 98 cent avos for 49 cents. Of course, I got bananas for 49 cents a lub. Seems like after all this time, they’d lower the price.

I had two coupons I was going to use for that ice cream. Since I couldn’t use it there (they don’t have any other So Delicious products), I stopped at Bi-Lo and got a couple of pints of creamer. I asked one of the men about the ice cream. They don’t have it but he’ll see if they can get it in. I explained it’s non-dairy and the only one I can eat.

I’d gotten home, unloaded and changed clothes when I noticed Twinkle glaring at something outside. She was bristling and hissing. I looked and it was the Cavalry hours earlier than I expected. If I’d dilly-dallied much longer in town, I wouldn’t have been here.

He came in and started on getting everything ready to take the old water heater out. A few minutes later, here came my cousin. She told me my CIL had said I wasn’t home and hadn’t been most of the day. She has a key so it wouldn’t have been a big deal, anyway.

The changing of the water heaters was a lot more of a process than I had thought it would be. It must’ve taken a couple of hours or more to get ‘er done. It’s a top-notch job, though. There was no cutoff at the heater before but there is now. That wasn’t the only modification but I am at a loss for words to explain what the different do-hickeys are. Water was everywhere and I have towels to wash now. I’ll have to wrestle the washer back into place some way.

Everything was picked up, loaded and put away. My cousin went home and, after a bit of visiting, the Cavalry did the same.

He’d said there would be a lot of air in the hot water pipe and it might take a few minutes for it to be running normally. That was the truth. It could put Twinkle to shame with its hissing. After it finished with that (complete with smells of pipe glue or whatever it is), it commenced to gurgling. Finally, rusty water poured out and then black. I let it keep running and, by and by, it ran clear. It was barely warm. Later, I turned it on again and it was HOT!! much hotter than before.

I was in the process of washing a pan so I could heat up the rest of my split pea soup when the Computer Owner called. She’d called me yesterday about not being able to get into her computer. I’d looked up possible causes and she was calling to find out what I’d learned. The problem is, she wasn’t at home. I asked if she’d rebooted. Yes. Several times. Well, if that didn’t work, it would be quite a process to work around it and she would need to be in front of her computer. I guess she thought it would be easier than that.

After we hung up, I heated my soup and ate. It was late and I was hungry. That’s a bad combination.

My sister has about convinced herself that she now wants a notebook/laptop rather than a desktop. To me, that’s a wise decision but she’s going to try out our other sister’s new-to-her notebook first. She called this evening and said if it’s a go, she’ll want me to order one to be sent to me and I’ll get it all set up for her. She’ll call me in the morning to have me walk her through creating a PayPal account.

Tomorrow, I’m going to do a dreaded deed. It occurred to me that my closet is on the other side of the wall from the utility room. It’s stacked full of stuff that is potentially soaked. I guess it’s time to clean it out and see what might be ruined.

2 Responses to In Hot Water