I’ve been monitoring my claims on Humana. I’m speaking of the ones connected with my hospital stay. The one for the doctor(s) was paid right away. My responsibility = zero. The three for the radiologists were paid a little later. My responsibility = zero. The ones for the ER and the inpatient stay are still in review. I have an idea of what I’ll owe but, until they are processed and paid, I can’t be absolutely sure.

My cousin came over this morning to check out the water in front of the washer. She had to move things around and get in some very awkward positions to see what was going on. 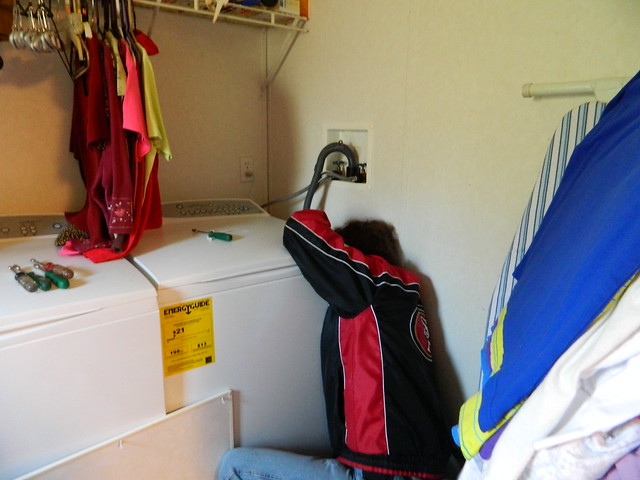 She’d taken the panel off the area below the faucets and drain that go to/from the washer and the upshot was, that’s not where the water is coming from.

Next, she took the panel off the place where the water heater lives. I’d never laid eyes on it before. I knew it was there because it’s the only place it could be.

I spied something strange on the wall beside it. A key was fastened to it with a screw. She took it off and handed it to me. If it used to fit the locks before, it doesn’t now. I’d had to get a locksmith to come in and change the locks and key them all alike. It looks like a house key but it has no home any more. 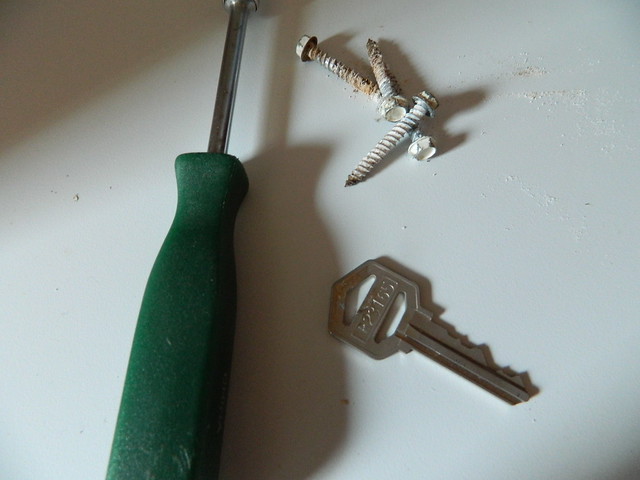 While the water heater is a handsome-looking one, it’s the source of the leak. There’s water coming from a fitting as well as rust indicating there’s more than just that. She went under the house to see what was going on down there. When she came back in, she said the insulation is dry so the water hasn’t seeped through. That’s a plus.

At her direction, I dialed the Cavalry and she left voice mail when he didn’t answer. She had a full day ahead of her so she was asking him to come by and tighten the fitting to see if that would cut down on the minor flooding.

There was a bright spot in the day. My sister had clicked through the “Donate” button that’s at the bottom of each page of my blog and contributed to the upkeep. It’s the first ever donation! I’ve gotten a few over the years on my forum but this was for my mango fund. Maybe I should change it to the water heater fund because my cousin advised me to go online and start shopping.

When DD called, I gave her the news. I’d been reading up on water heaters and was learning more than I ever wanted to know about them. There are six, nine and twelve year ones. Hybrid. Tankless. If I could afford one, I’d get a hybrid but $1200 for a water heater seems a little much. I know I don’t want a tankless/on demand one. DS1 and his have one and I hate cleansing my body when I’m there. The water is much too hard to regulate if I take a shower and running bathwater takes forever because if it’s turned all the way on, the heater can’t keep up.

DD told me more about merm’s birthday party. She said there was lots of food they didn’t even put out. They’ll probably be eating leftovers for a while.

I’d finally gotten back into working on the lessons and the editor was happy—I think. Sometimes I feel like ghost staff. People say, “You volunteer on SSNet? You aren’t listed.” No, I’m not. That page hasn’t been updated in, literally, years. At least they get my name right on my paycheck. Oh, wait! There isn’t one of those, either!

Late this afternoon, the Cavalry rode in. He looked at the water heater and said it looked like it had been a good one. “Had been”. Not “is”. He didn’t have the right tools to tighten the fitting but that doesn’t matter. My cousin got home just as he was leaving. She came over and they agreed I needed to look for a heater. She said she’d help me, which is good because I know next to nothing even with all my searching today.

This evening, she called. She’d found what I need. I’ll call in the morning and order it and they’ll pick it up tomorrow sometime. Life is what happens when you’ve made other plans.

A Regular Person
How’s That?