How long have I been working on That Computer? I don’t remember but it seems like forever. It’s a good thing I enjoy such because it would have been abject torture otherwise. When I had it up and running Vista a few days ago, this is what it looked like: 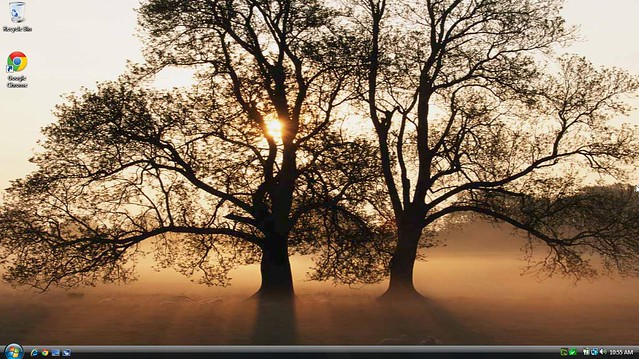 Now, with Windows 7, it has an Aero theme. I guess it could still have the trees. That image came from the sample images that come with a computer. I don’t know if it’s there or not but if the next owner wants it, it’s no doubt out there somewhere. I do like Aero, though. It’s so easy to download and install new themes, too.

Well, I think I’ve about got it licked. Everything’s working like it should and I’ve cleaned up all the temporary files. I’ve learned a lot.

I looked out this morning and it was snowing. It was just barely a dusting on the deck. Thankfully, I didn’t have to go feed the critters. My CIL took care of them today.

DD called this afternoon. She’s been looking at houses and one place is being pushed by the realtor as something that could be turned into a commercial property. The projections are glowing and a spreadsheet was even developed. It was said she could retire and live off the income. On a closer look at the spreadsheet, though, the income would be around $2,000 a year. Now, there are some people who could live on that but I think she would be hard-pressed to.

My friend from church was at Costco when she called me. I gave her my order for Campari tomatoes and that was that. She told me about some other items they have but one had spinach and I still have some of another.

It’s after 9 and I’m yawning. Maybe I’ll sleep well tonight. When I woke in the wee hours, I was tempted to get up and see if the latest updates had installed okay but I restrained myself. Tonight, there will be no need.

I won my birthday Wordscraper game. That’s how it should be.