Thursday night was cold. It’s been down in the teens again. Hot chocolate seemed to be the drink of choice. My mother used to make it and put a big scoop of vanilla ice cream into the steaming cup. I made a mug full and added some vanilla coconut ice cream.

It wasn’t my best decision of all time. I couldn’t go to sleep. The instructions were to mix three heaping teaspoons with one cup hot water. I used four. ARGGGHHHHH! I was still awake at 2 a.m. I got up and fooled around with the computer some more, hoping against hope that I could get it to install the Windows 7 upgrade. I’ve come to the conclusion that the upgrade disk is damaged.

Sleep was long in coming but it finally got here and totaled, maybe, four hours. I expected to be dragged out but I did have energy and got some things done before I went to town.

First, I had to go to the Animal Hospital to give them the coupon I’d failed to remember before. I argued myself past the Mexican restaurant and was successful. Next, I dropped a package off at the designated place for a UPS to pickup (thanks to Facebook, I’d found out where it is). Then it was on to Walmart.

I was looking for cough medicine when who wheeled up but Kimberly’s husband, Adam, and their daughter, Bell. I don’t know if you remember or not, but Adam is Genese’s son-in-law and is the one who was hit by a train and lived to tell about it. We talked about the cake Bell had decorated for Kimberly’s birthday the day before. Kimberly said it was the most beautiful cake in the world. For a girl Bell’s age, it’s quite a masterpiece. 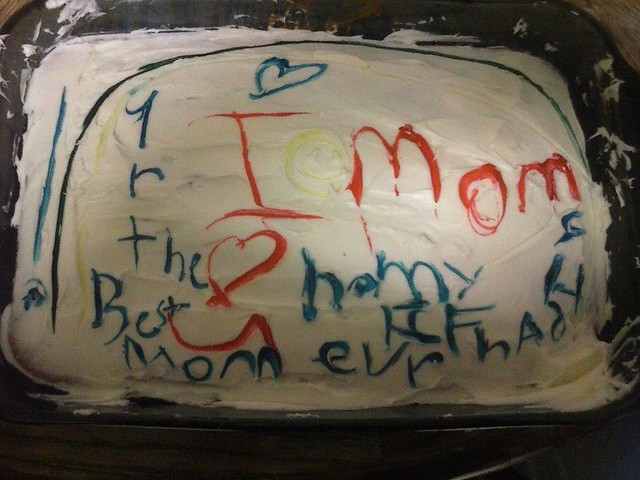 Kimberly was in the store somewhere but I never found her.

There were a couple more friends I ran into while I was there, too.

When I got home, I figured I’d better feed the cats so I wouldn’t be stumbling all over them while I was carrying in groceries. I always count them to make sure one hasn’t gotten by me and into the house. There were only five. Something wasn’t right. Six was there. The other two striped ones were there. The two with interesting designs had shown up. I’m kind of slow at times so it took a minute for it to sink in. Blackie was missing and she was always there for feeding time. In fact, she usually was one of the escorts from my house to theirs.

Since I’d already fed the babies, I came home and unloaded the car and put everything away.

I checked on the eagles. There was a note on the Facebook page saying that the other egg probably isn’t viable. The parents will treat it as if it is until it disintegrates. The one eaglet is thriving, though. 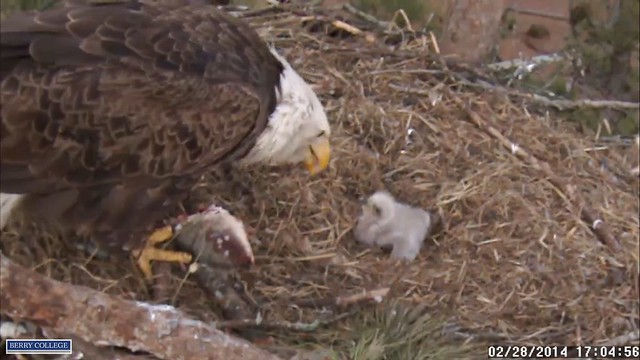 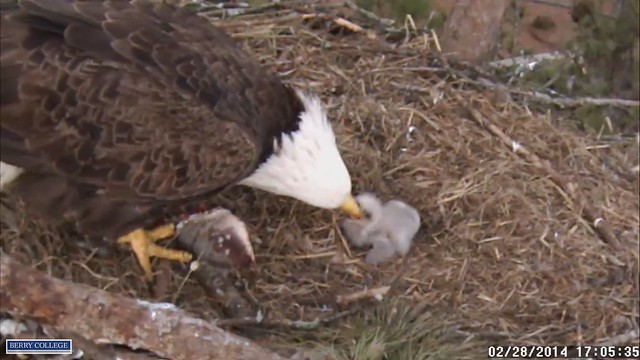 It looked like the parent (I can’t really tell them apart) was tearing pieces off a fish to feed the babe. Earlier, feathers were flying everywhere when a dead bird was being prepared for breakfast. I’m glad I’m not an eagle.

I called and left voice mail for my cousin to let her know the cats were plumb out of food.

The upgrade still wasn’t upgrading. I got the bright idea to copy the files to a flash drive using my new-to-me computer. I plugged it into the other one and setup started. It seemed to be proceeding just fine. I called DS1 and sang the first few bars of The Doxology. My only misgiving was that the upgrade would stretch into Sabbath. After we hung up, there was a message on the screen that said setup needed to restart the computer. There was nowhere to say OK. I finally restarted it manually which interrupted the setup. Oh, well. It wouldn’t be working on Sabbath. Vista was still there so it was okay in that regard.

Sleeping was better last night. I did wake in the early morning hours but I went back to sleep and slept until almost 7.

When I filled out my prayer request card at church, I put down for Blackie to come home. It’s amazing how I’ve gotten attached to those animals when all I do is feed them now and then. Of course, they are usually right there whenever I go outside.

After the service, one of the ladies came up and was asking about the organ. She and her family have been coming for a few months and I was hoping her curiosity was because she plays. It wasn’t to be so, though. I explained that it has two manuals, each with its own sound. The pedals are like a third keyboard and they provide the bass. She does play the piano some and has promised to practice so she can help the pianists when necessary.

There was a vehicle in the driveway when I got home. I was glad to know the critters would all be fed today. I sent my cousin a text and she said yes, that my CIL had brought some cat food. When I mentioned Blackie, she gave me the bad news. My CIL had found her lifeless body beside their chimney. This is the best picture I could find of her. 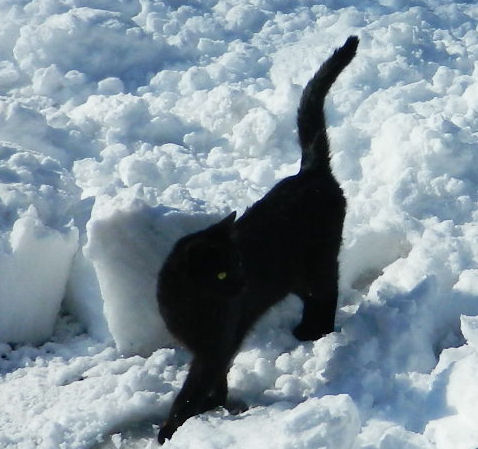 Now I’ll only count to five and know they’re all there. I will miss Blackie. It isn’t unusual for an outside cat to meet such a fate but I was hoping all six of them would survive.

Twinkle got lots of lap time this afternoon. Her weight gain has started up around her head and neck. I’ll be glad when it extends to her hindquarters.

Well, Kimberly and hers went to get Genese’s computer yesterday. They spent the day upgrading the software, then had to take it back across the mountain to her. Big Brother has all the sites blocked that she needs to access to keep her laptop updated. That includes Microsoft. It makes no sense at all. The terms of agreement for the public wireless state that the user is responsible for having antivirus software but what good is it if the definitions can’t be downloaded? It is my opinion that, since Genese can’t take advantage of the extracurricular activities the other residents can, she should have DSL through the local phone company. The nursing home already has DSL. It would just be a matter of running an ethernet cable to her room and that might cost as much as $20. If they’d do it, I’d be glad to pay for it.

Daffodils are up several inches. In spite of everything, life does go on.

2 Responses to Life on Planet Earth