I cannot be stopped! I did it again! I got up in time to exercise this morning. Now, don’t say that I can’t do it again tomorrow because I’m certainly going to try.

Breakfast was a peach and a banana/blueberry smoothie. I had my watermelon outside, as per usual.

Nancy came to tell me that we were eating lunch in the conference room, which was a good idea because the break room is crowded with six people and our group was that many. That wouldn’t leave room for anyone else. There were the usual comments about my lunch plus shock that I would dare to eat raw okra! We had all contributed to the lunch today. My contribution was Mock Salmon Pate (hardly anyone ate it) and salsa which they about licked up. My lunch was a large salad (spinach/Boston/romaine dressed with lime juice), the MSP, and salsa. The others had their little salads and I suppose they were still pretty hungry when they got through. I was good for hours.

I learned from yesterday and took my socks and shoes with me this morning so I could go berrying directly from work. The kids and leaders from the local Pathfinder Club were there and they picked 12 gallons. They’d spread a cloth under a bush, shake it, and then go through them and get most of the garbage out. That’s fine, but I like to pick “clean”. I got my gallon and it was getting on toward dusk when I quit. The man of the estate asked me if I’d picked them all and I told him yes, that it was bare and he could close it up. Of course, that isn’t true. The berries are still hanging thick. I may go back another time or two. Depends on my mood and the weather.

When I got home, I went into the bathroom to use the commode. When I lifted the lid, I thought there was a piece of tissue stuck to the side, then I thought it looked more like a light-colored mouse. Finally, I realized that it was a 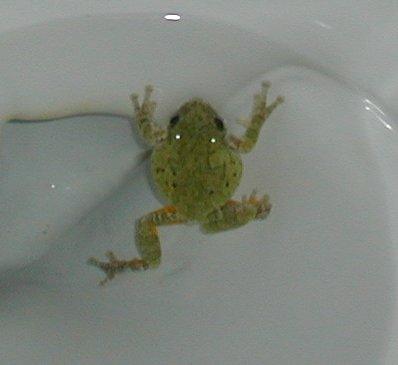 TREE FROG!
I didn’t have the slightest idea how I was going to get it out. I really didn’t want to try to catch it in there. After I’d taken its picture, I got a container out of the kitchen and tried to get it. It swam back into the pipe. I thought I’d have to use the other bathroom until I could get it out. I shut the lid and when I opened it again, there it was. This time, it sprang out and I chased it along the floor and into my bedroom. I was about to the point that I was going to resign myself to living with a frog when I spied it on the “sold” sign that was on the house after I bought it. I still have a lot of Stuff around. Anyway, I managed to pray my way to the door with the sign and the frog stayed attached. It hopped off onto the step and I thought it had gone on when I found it on the screen. From there, it went out into the yard and I have no idea where it is now. I’d completely forgotten about using the bathroom, that’s for sure.

My shower over, I had a banana smoothie. That’s all I wanted. While I sipped it, I added to the remaining salsa.