It might have been the order I took it in or the fact that, previously, I was already sleep-deprived but I didn’t sleep as long a stretch as I did the other night. I did sleep, though. And I didn’t have to get up as often. That nighttime pain pill is helping.

I was up by 11 TT but Cuz didn’t get my text. I called her but her phone didn’t ring. Last ditch effort, I called my CIL and he stumbled out of bed to answer. His phone stays in the kitchen because that’s where it gets the best signal.

He brought me my water and told me someone from hospice had called about 9 or 9:30. That would have been an hour earlier TT and I was sound asleep.

I had texted my friend when I was up to take my morning meds. He was in Chattanooga and was on his way up here. I asked him to wait until afternoon to come because I wasn’t officially up yet so he went to see mutual friends. The wife is the one who had told him I’m terminal. I texted him again and he was hoping to leave there soon. I told him I haven’t had a bath in a week and a half but if he didn’t mind the stench…

Just about then, the shower person came in. I told her we were going to have to put it off again because my visitor was on his way. She took my vitals and quizzed me and, before she was ready to leave, he’d arrived. He and Cuz were talking in the kitchen until the hospice person left. I had asked her if she were the one who called and she looked exasperated and said, “NO! I’d put it in notes not to call or come until afternoon!” It was the nurse.

Cuz brought a chair in when she left and my friend came around the corner. He’d gained a lot of the weight back that he’d lost but he still was a sight for sore eyes. Speaking of sore eyes, he broke down and cried over me and my condition. In spite of his emotions, we had a good visit. He’s working three jobs to try to get ahead. He’s putting in 16 hours a day. That’s killer.

Before he left, the nurse had gotten here. I prevailed upon Cuz to take our picture with her Kindle and when I asked if it were okay if I put it on my blog, he said to put it wherever I want. So, here it is. 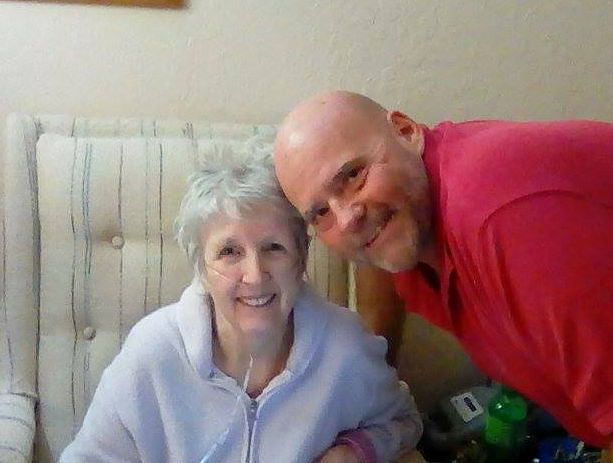 When HE left, the nurse came in. It’s the one that’s to be my regular one and, boy! can she get things done! I’d already had to ask my friend to step out while I used the potty but I had to ask her, too. She was very concerned about how short of breath I was when I finished and sat back down in my chair. She’d already inspected my backside to make sure my skin wasn’t showing signs of breaking down. Thankfully, it doesn’t.

Evidently, she’d started a timer on her phone and it was five full minutes before I could catch my breath. She said she’d ask the doctor to order something to help with that. I asked about increasing my pain med and she said she’d ask about that, too. She bumped my oxygen up to 4 LPM. Then I told her the oxygen hadn’t been switched out yet and I was supposed to get a wheelchair. She was here for a long time but since the aide had taken my vitals, she just recorded what was in the book. Her phone (furnished by hospice) didn’t get a signal here so she listed all the things we’d talked about and said she would send it to the doctor as soon as she got to a “good” spot.

After her visit, I was too pooped to pop.

A little later, the phone rang. It was a man from the DME place. He will be here tomorrow with an oxygen concentrator and a backup tank so the other company can pick theirs up. He’ll also bring a WHEELCHAIR!!

Not long after that, the phone rang again. It was the nurse. The doctor has prescribed a liquid for me to take to “smooth out” my breathing after I exert myself and a time release pain med that I take once a day with my thyroid med. She said that it should keep me from having to take so much of the pain med I already have but, if I need it, I can take it up to every four hours.

My “breakfast” was kind of stretched out. I had applesauce and a scrambled egg before the visits started and Cuz brought me a mug of apple juice. I was munching on the waffle during all three encounters and finally finished it after everyone had left. Supper was tapioca, a good-sized bowl of applesauce, and a piece of my bread, toasted. I put kala namak in the applesauce and it made it so good! My CIL would be amazed. I had a cuppa tea.

I was going to wait a little while before I took my nightly pain med but I was hurting so much, I had to go ahead and take it. Me. The person who doesn’t like to take medication of any kind is, as my mother would say, living on drugs. I’m very thankful I have them. And hospice is paying for them.

Weatherbug just chirped at me. The air quality where my middle sister lives is under alert for “Fine particulate concentrations”. I’m thankful for my air purifier. Air quality here is seldom anything but good.

My friend was able to download and install OpenOffice and she’s thrilled. I went to their site and made a donation for all the years I’ve used it for free. I figure they’d earned it. She also told me she’ll be at the university tomorrow so I’ve asked her to pick up some Ginseng UP. Surprise, surprise!

Pixel is doing well. DD said that he’s much more comfortable today. Thank you for all the prayers that have gone up for him — and for me.

Well, the day is done and so am I. Cuz has come in and hugged me goodnight. My CIL is finally off Tommie Duty and I know he’s glad. He probably hurts worse than I do at times and that’s pretty bad.

Tomorrow night is my night off. At set of sun, the 24 hours of Sabbath will begin. I won’t have worked but it’s still a time that gears are shifted and the mindset is different. Until Saturday night, then.