Last night was as usual. Coughing and dozing until the coughing tapered off and I was able to sleep. Temperature-wise, it was better. It even got cool enough later that I could pull the comforter over me. That’s the way I like to sleep. Breathing cool air while in a warm bed. I don’t want much, do I?

Cuz had said she’d be going to the mountain today and, sure enough, she was gone when I got up. I called my CIL and woke him. I hate it when I do that. Sometimes I feel like we both need someone to take care of us but he gets done what needs to be done.

I was eating my bowl of applesauce when the nurse from hospice came in to admit me. She went over everything and explained all the forms to me as she went. She put them in two stacks — one all needed my signature. I explained to her that my advantage plan wouldn’t pay for hospice so I’ll have to be switched to traditional Medicare. She wasn’t familiar with that so she said that sounded like a social worker thing.

I’ve signed up for two baths/showers a week to start, which can be increased or decreased, and once a week for a nurse. That can be increased, too. While the aide is here to help with my shower, she’ll change the bed. That will take a load off Cuz. Since my bed is already paid for (I’ve had it since March of last year), all of the equipment they’ll need to swap out is the large oxygen concentrator and the backup tank. The DME company will also bring me a wheelchair. They’ll give my personal physician the option of continuing or transfer me to the hospice doctor. I hope my doctor will sign on for the duration.

After getting all the paperwork done, she took my vital signs. O2 sat was 97%, temp, 97.7, BP 110/60. She listened to my heart and lungs and told me I have a lot more crackles in my right lung than my left. She went to her car and got some scales. Making sure they were set right, she had me stand on them. The verdict? 112 lubs. That’s a long way in eight months.

Just before she left, my CIL told her she’d need to go out the front door, that the door to the garage was going to be shut because they were bringing a cat in. Black Tom was home! Cuz took a couple of pictures of him this evening and posted them on my Timeline on Facebook. I got her permission to use them here (I doubt she would have minded, anyway, but I like asking.) 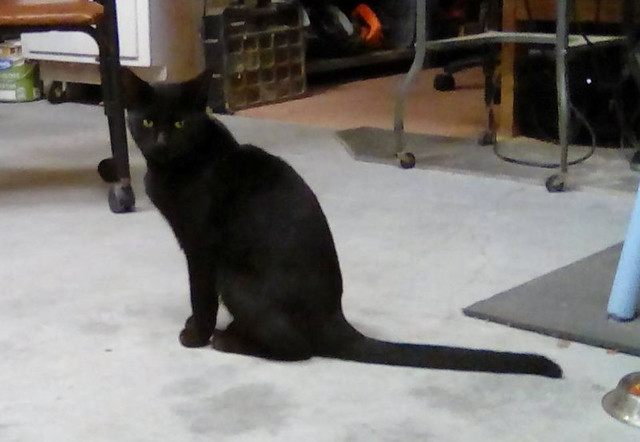 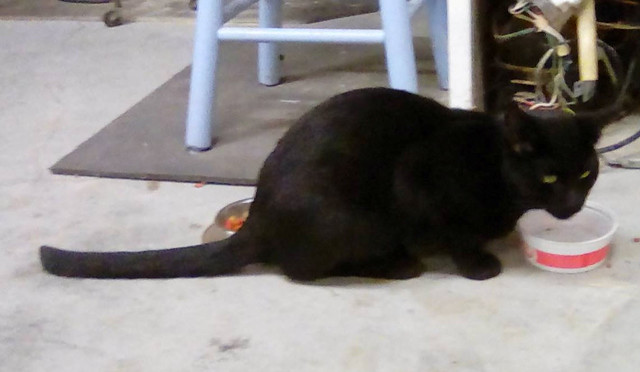 Cuz said he’s one smart cat. The live trap was set and he went in and out several times but always avoided the plate that would drop the door. He came over to her to be petted and when he turned around to walk away, she grabbed him by the back of the neck and farther down his back so he couldn’t scratch her and then she put him in the carrier. He yowled all the way home (it takes about an hour to get here) so she turned the radio up.

I got a text from DS1 today saying he’d talked to my DIL and they think that I should sell everything I don’t want and that he and DS2 don’t want and sell the rest so I’ll reap the benefits. I wonder what benefits those are? I have everything I need right here. There’s no way I’m going to be able to go on a shopping spree or a cruise or take that trip to Costa Rica. That ship has sailed and I’m not on it. I told him that, like it or not, he and his siblings are my beneficiaries. I was hoping to see a new church for our congregation before I die but that isn’t going to happen. Even if I gave everything I have, it wouldn’t be enough.

From a depressing situation to an exciting one — today is my granddaughter’s 15th birthday. She got her learner’s permit and, from the pictures her mom posted on Facebook, she’s already driving on the highway. She’d take the Jeep up and down the driveway, which is rather long, so she wasn’t a complete novice. If I were able to, I’d ride along with her behind the wheel.

I’ve eaten a little more today. I kept working on the applesauce while the nurse was here and finished after she left. Later, I had two scrambled eggs. My CIL baked some rolls and they smelled so good, I had one of them. This evening, I asked for some noodles, just noodles, so my CIL cooked some to a perfect al dente consistency but I needed them easy to chew so I sent them back for more cooking. I’ll bet he thinks I’d make a terrible customer in a restaurant. When they were brought back, I ate them all. I don’t know that I’ll be gaining weight but maybe I can maintain. I still weigh more than either of my sisters.

It’s been a busier day than usual. I’ll have more visitors from hospice in the next several days and then it’s supposed to taper off. There’s the chaplain, the social worker and someone else, I don’t remember who. I remember one’s name is Michael Jackson. She asked if I have a pastor and I told her yes and gave her his name and phone number. What church? Seventh-day Adventist. Do I have a funeral home picked out? I told her I’m signed up with Genesis and gave her the information for them.

I’m tired. I’ll bid one and all a good night and sweet dreams. May we all be blessed.

Another Day But…
Debate Night