A couple of times lately, DD has mentioned that Pixel seemed “rounder” than he should be. She took him to the vet yesterday and they did an x-ray. It showed a mass in his abdomen so they scheduled him for an ultrasound and biopsy today.

When they got back, the news was he has a mass that’s attached to his liver. The results of the biopsy won’t be available until next week and then the vet will make his recommendations. I’m praying that it’s nothing serious and, if it is, it can respond to treatment, whatever that might be. I’ve called in reinforcements and asked two different groups to pray, too.

Pixel has been a large part of DD’s life for 12 years and it would be devastating for something to happen to him at this point. She knows that he won’t live forever but 12 is too young. As she says, through everything that’s happened to her over the years, he’s been the one constant. If I had the ability, I’d make sure he stays around for a long, long time.

He seems to have an affinity for stairways. I have a picture somewhere that’s similar to this one that I took when they occupied an apartment in Queens. If I’m not mistaken, this was taken in the apartment in Lynnwood, WA. 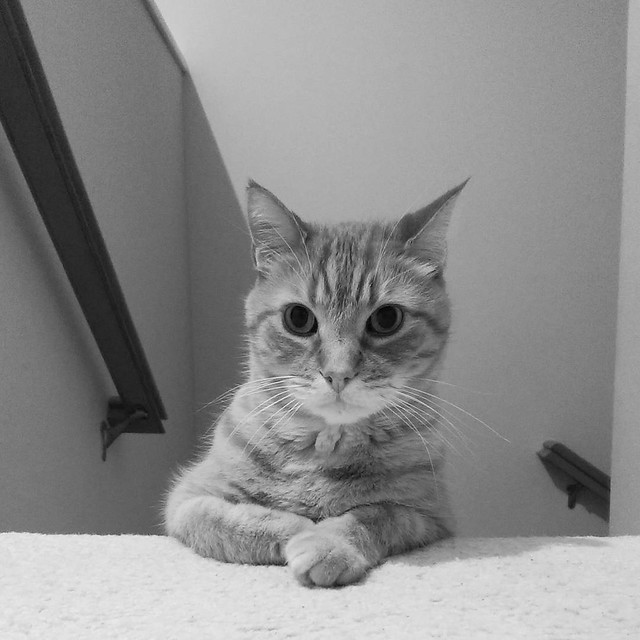 DD captioned this, “It’s been one of those days… Just give me the strongest thing you’ve got.”

It’s been one of those days here, too. I started out by messing up. When I got through drinking my water, I called for my CIL but didn’t get an answer. I can’t yell very loudly because it takes too much lung power so the second time I didn’t get a response, I picked up the phone and called him. When he answered, I asked, “Where you are??” He was in a neighboring town. Cuz’ van had broken down and he’d gone to rescue her. He was on his way back. I apologized when he got here for calling. He apologized to me for not letting me know he had to leave. We were just a sorry pair, I guess.

In addition to Cuz, two other people had tried to start the van with no luck but when my CIL got in, it fired up right away. I guess he has the magic touch.

Both Cuz and I had forgotten about the avocados she’d bought last Friday. They’ve gone a bit too far. I ate a third of one on toast but I didn’t really enjoy it. They’d probably make good guac but I’m really not in the mood for it.

I had toast and applesauce with cashew milk on top of that (I’d already had yogurt, too) and it was a little much.

This evening, I had leftovers for supper and topped it off with an ice cream cone. The cone was bigger than the ones I’ve had before and it was a lot too much. I’ve felt queasy ever since and my reflux kicked into high gear. I coughed until my fingers turned bluish. The cone isn’t as tasty as the smaller ones, either. So, I overdid it at both meals and I’ve paid for it.

When I was coughing, I got very hot. I couldn’t get up and turn the fan this way but it hit me I could use the purifier to cool off. I turned it up to six and put it on oscillate until it was pointed toward me and then I stopped the oscillation. It was perfect! Cooled me off and when it had done its job, I turned it back the other way and put it on auto. Nifty!

Cuz’ sister (also my cousin) came back from a conference in Las Vegas today. The flight was diverted so she was getting into Chattanooga late. I thought it might be because of Matthew but no. A pregnant woman on the plane had her water break. I didn’t know someone that far along was permitted to fly!

Matthew is destined to make a mess of things. Looking at the latest track, it won’t hit as much of Florida as I thought it would. Anything is bad, though. I’m praying for the people who are in its path. The Housesitter lives in an aluminum travel trailer from the 50s north of Orlando. It’s on the St. Johns River and I see where it could overflow its banks. The park where she lives has a concrete block building that houses a bait shop. Unless she’s already gone somewhere else, it might be open to the residents.

It’s time to put the strip on my nose. Here’s what I told my sister about the one last night:

I’ve given my nose a rest today. I bumped one end of the strip this morning and it popped loose so I took it off. I hadn’t looked in the mirror (not a favorite thing to do these days) but Cuz said there was a place on my nose. I’d scrubbed it well with a prep pad and put Melagel on it but when I finally looked in the mirror, I could see what she meant. When I put the strip on tonight, I’ll leave the ‘gel on that spot and let the strips just stick to the sides.

I need to remember to ask Cuz to get my phones out and charge them so they’ll be ready to go when I order phone service from the satellite company. I need to do that sooner than later.

From my perch here in Tennessee, I’ll say good night.

5 Responses to A New Reason to Pray