To make sure I didn’t miss the call from the home health nurse, I took the phone to bed with me last night. When I got up this morning, I put it on the table beside my chair and made sure it was on with enough juice to get me through.

I kept listening for the call but it never came. Eventually, Cuz came in followed by the nurse. She had tried to call several times but the phone never rang. Just to make sure, she called again but the phone didn’t ring. I’ve had it up to here with this phone. When I do make a call, the quality is so bad I can’t understand what’s being said a lot of the time and that’s on top of my hearing problem. I asked Cuz if there would be a penalty if she turned it back in and she said yes but she’ll find out how much. If it isn’t horrendous, it’s going back. I told her it isn’t like I’ll be out on the road using it.

The nurse started her visit talking about how much longer the visits can continue. I wish she wouldn’t do that. It makes my blood pressure go up and that’s something I don’t need. Normally, it’s below 120 on the top number. Today it was 130/70. I needed to ask Cuz about someone to come do my injections so I texted her. It didn’t go through. Twice.

Some good news, though. She’d faxed the order for the wheelchair. I haven’t heard anything from it. I don’t know how long it will take so I’ll try to call and check on it later this week.

Cuz and her BIL worked hard most of the day so it was no surprise when she said she wasn’t cooking tonight. They were having pizza so I figured leftovers for me. However! they’d picked up an Amy’s Cheeze Pizza. She added onion, pepper and mushrooms and it was GOOD! 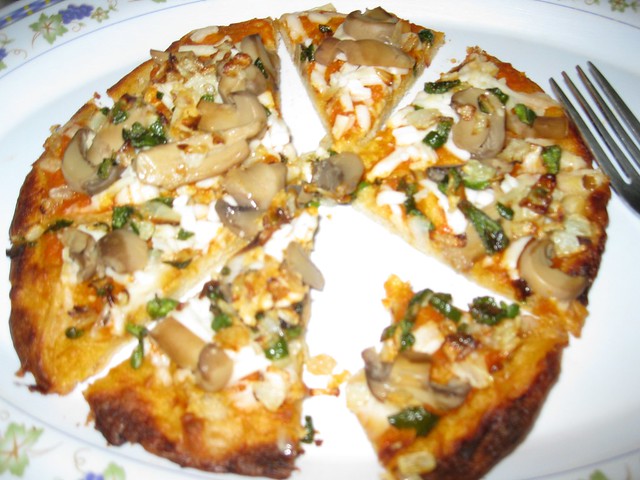 It isn’t fully in focus but it looks better than the picture on the box.

It’s been cool in here all day today. I got a pair of socks out of the drawer and have worn them most of the time. They feel good.

When Cuz came in to tell me good night, she asked if I’d be watching the debate. I told her I had it set to record. It’s on now so I’ll be shutting this down soon.

She said she’d gotten my Breathe Right strips out and they were in the bathroom. I explained they have to be cut in two lengthwise because they are too big for my nose. She got them and cut one for me so I can wear it tonight.

My CIL is going to give me my cough medicine. We’re using the syringe Walmart included with the prescription. Maybe that’s why it was so expensive. It does help with accuracy.

Oh! She told me Mongo had killed a baby rabbit. She was going to get my CIL to get it and dispose of it but, before that could happen, the little body got et. I wondered if he could get undulant fever from eating it but maybe that’s a human thing. I don’t know. I guess we’ll have to hide and watch.

Mad at Myself
Considering the Possibilities