With this being my maiden voyage with satellite Internet, I had no idea what to expect with data usage. I cut the video quality down to the lowest possible on Hulu before I finally canceled it altogether. Deciding to keep Netflix for the time being, I went to my account settings and dropped the quality there, too. Once a video gets going, it isn’t really that bad. At first, the images are pixely, but they smooth out pretty quickly.

I’ve been checking my remaining data off and on and have been trying to be smart about using it. There are two days left in the billing period and I’m down to .7 GB according to the website. Whether that’s completely up to date is a big unknown. When I went to bed last night, there was more than when I got up this morning (yes, I was up before noon). That was with Chrome and Thunderbird both closed. I thought about disconnecting completely but I didn’t want to prevent my antivirus from updating and running.

Next billing period, I won’t be watching anything online that I can record and watch on TV. Until the DVR was installed, I was still watching some things on Hulu that couldn’t be scheduled to record later. I look at this time as the training period. All in all, I think I have the hang of it now.

Last night was another good night. I had some weird dreams like Derek Hough was hugging me and he had developed a spare tire. Yeah, like either one of those will ever happen.

This morning, Cuz had gotten the prescription for more cough medicine filled. It was quite a shock. Before, at a pharmacy over the mountain, I’d gotten a 16 ozzie bottle for $31. Today at Walmart, eight ozzies was $49.69. Taking it two teaspoons at a time, the bottle will last 24 nights. Cuz is going to try to find a better price.

My phone was showing three out of four marks for the battery but that’s what it was when DD and I were talking last week and it died. I hooked it up to the charger so it would be ready to go when she called. But she didn’t call. She emailed me and asked if I were up to talking. I figured I could do it if I breathed enough so it was agreed that I would call her when I finished my devotions.

I don’t know how long we talked. Cuz had shown me how to get to that information but I don’t remember. I don’t suppose it matters, anyway. I tried to keep from coughing by making sure I was breathing enough and it worked. It made for some pretty choppy sentences but that doesn’t matter, either. DD’s been babying her sourdough starter for quite a while now and hadn’t been able to use it without supplementing it with yeast but she said that, today, it had taken off and rose all by itself. Later, she posted this picture on Facebook: 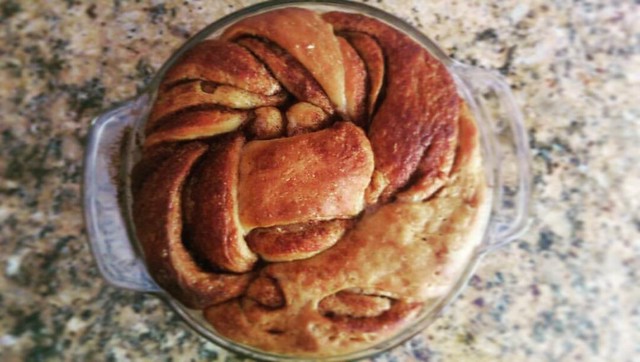 She was pretty thrilled and the twist looks yummy!

She’s going to a writers’ conference next weekend so we won’t visit. Her SO is going with her. She hopes he’ll enjoy it and not regret agreeing to go.

Some time ago, I had suggested to Cuz that she could build me a little platform to go by the bed so I’d have an easier time climbing in. She came in this evening and said she didn’t want to do that because she was afraid I’d trip over it or stub my toe. I showed her how high the siderail came on my legs, even on tiptoe, so she brainstormed and came up with the idea of doing away with the siderail, period. All it’s been there for is to hold the control to raise and lower the bed. So…she took it off, slid the control to the other side and put it on the siderail next to the wall. We’ll see how this does. Seems like it should work. I’ll see tonight. She’s so smart!

Supper was fried okra, fried potatoes with onion, beans and a roll. The beans were very salty and had a weird texture. I ate them because I knew I needed to eat but I didn’t enjoy them at all. I asked what kind they were. Cuz said pintos. Aha! Out of a can? Yes. Her construction partner was having pork and beans so she opened a can I’d had in my pantry for who knows how long. I used to buy them sometimes to make refried beans but I never ate them by themselves. She asked if I wanted to keep them for later. NO! They were nasty! To finish the meal, I had the rest of the P.B. and Cookies ice cream in a cone. It filled the cone but there was none to round the top. That was okay. I was full.

Guess I’d better link some texts before I go to bed. I’ll do tomorrow and let it go at that. Maybe I’ll be up to doing more later but not later tonight.

Tomorrow night is the first presidential debate. All of the networks will be carrying it. I have the DVR set to record it in case I forget or go to sleep in the middle of it.

Since I’m going to link, I’d better close this down for tonight.